The King is on his dead bed and the quest for the new guild to take over the crown has started. In order to be considered a contestant you will need to craft items to protect the town, build a glorious castle and raise the economy in town, by hiring workers. Are you up for the challenge?

The King’s Guild is a very fast moving game; turns are quick even with 6 players. You get points by crafting items, building sections in your castle and collecting treasure cards.

You could say the game is played in rounds, but the flow is continuous as only when the special mid game card and the end of the game card is revealed, all get an extra turn to horde some points.

Each player starts with a special ability and with limited space for resources and workers. And you kind of have to form small temporary alliances if you want those 2 item quests completed, unless you can fill them both yourself, but this might take too long.

Managing your resources and getting a good stack of treasure cards can give you a good head start, but you might end up helping your neighbor as many of the treasure cards also give a benefit to them.

I really like this game; though the funny thing is, when I first played the solo version, to learn the game and I had no one to play with at that time, I didn’t really like it, and put the game aside for a long time. I have now later played it with more players and this is where the game really shines – because there is some take that situations in this game; finishing an item or buying buildings or workers, let alone taking the resources before your opponents. Resources are very limited. But there are also the decisions, if you should help your opponents with finishing a 2 item quest or giving them resources or money via treasure cards.

Having the treasure cards takes this game to another level – the cards are always good for you, but quite a few also help your opponent to the left (or all of them), which is a nice twist, “do I really want to play this card to get 2 resources, when I know my opponent will also get one”?

The nice mechanics with hiring the workers with special abilities discounting all workers to the right of it and therefore making it cheaper for someone else is another good decision making; the same mechanics as seen in Century Spice Road and others.

The game can drag out a bit, if there are items where the resources needed are all spread across the players, and having to wait for those to become available again. A “reset the market” with quests cards could be a good solution for this.

It’s not easy to find a good 6 player game that doesn’t feel too long for what it is, but runs smoothly and everyone being engaged – the King’s Guild is a good option for this.

There are variable ways of winning the game, and what to focus on and there are good ways of interfering with your opponents without it being ruthless. You might also help out your opponent as there are these 2 items quests, where you craft one item at a time and it can be two different persons crafting. But using the treasure cards also can benefit your neighbor.

That perfect moment when you craft an item will come.

You can play this game either light weighted or really trying to optimize you moves, but especially in a 6 player game, a lot can change before it’s your turn again.

I won a game based on one of the buildings in my castle, which turned gold into victory points, which seems a little overpowered, but then again you could have earned many quest and treasure cards and winning this way. And there is also the aspect of symbol collection and scoring these; though they require you to also have the special buildings for scoring, so which do you acquire first?

The game has a lot of replayability as the tiles to build in your castle and the different cards are set out random. The player boards (the build bonus are placed on different places) and character ability is distributed randomly to the players, independent of the player boards (so again a good amount of combinations here).

Since you always take out a few cards from both the workers and the craft quests it helps even more for the replayability; maybe the card to fit your resources or the worker to generate more resources might not come out.

The 1 player version feels to easy and not as intriguing, since the resources doesn’t seem limited in the same way, and the game is quickly over, so strategies are harder to form. This almost put be off the entire game, and it did for a while. I’m glad I tried it multiplayer before completely disregarding the game.

I really like that you can play up to 6 and with the game working really well. Since the amount of resources and cards are mostly the same as in a 5 player game it didn’t seem like there was much set back with this many people, it actually only took a few more minutes; though most knew the game already. What it does is make the game a bit quicker and strategic.

I haven’t played a 2 player game, but I don’t imagine it being that well, as you might get stuck on the 2 quest items. 3 or 4 players might be better as it’s not just back and forth from 1 player to another. But 5 and 6 players as mentioned works really well and I would surely play again.

Turns are mostly quick – since you only can select 1 out of 3 actions + playing all the treasure cards you want.

The basic game play rules are simple, but some specifics can be interpreted in different ways; there are some examples but not for everything. We found that it wasn’t completely clear that you can play as many treasure cards as you want and if you can immediately use the new treasure cards just obtained from fulfilling a crafting item. We played that you could. We made some huge mistakes with not reading carefully (but it could have been explained a bit better) and we had to play a few games to get everything straight:

1: When you take the expand action; you CAN buy a building AND/OR buy a worker – we unfortunately played that you could only do one thing the first few games we played – it makes a huge difference and fills your board much more + most workers got hired

2: When you buy a worker you place a discount on the workers to the right of that card ONLY if full price was paid for that worker – we played with discount every time, which made the workers very cheap quick – which also meant many workers got discarded because they became free.

3: When the game ends and you have your sigils on cards you GET these cards – can also make a little difference as these extra symbols might give you extra points plus you might want to do something else on the last turn then trying to complete the card.

There are some mix match in the rules about workers to hire and most of them we could find by looking at BGG, which shouldn’t be necessary.

So after our 4th game I think we got all the rules down.

My first play of the solo game almost made me give up on playing this game. It had so much setup and so little play time; around 15 min play time. It also seemed too easy that the resources never got taken by the AI. I like the aspect of the crafting quests and the worker cards being removed every round, which simulates other players, but they should have taken it further with the resources as well.

I have since played it after our multiplayer game and I feel the same way. If there was a quicker way to setup the game, I might be intrigued to play again, but it feels too stressful with the game going so quickly.

I would say it would be OK with not too many players as there are still some secret information with the treasure cards, but luckily there is a hand limit of 6. If players had their own game or at least the cards it would help.

This is not travel friendly, unless you go by car and can have the whole box with you. There are a lot of tiles, tokens, cards and boards and they barely fit in the simple cardboard insert the game comes with, so I wouldn’t recommend it, but of course everything is possible, and if this is the only game you pack, then maybe.

I might not be completely in love with the box cover and the look of the characters and sigils (I’m not a huge fan of big plastic pieces with stickers – and they have fallen off some of them – only good thing is that it’s thick plastic so durable), but I really enjoy the card graphics and the board. The iconography is really good and mostly self explanatory – if not there is a good explanation on the treasure cards.

The wooden resources, the tiles and the quest cards are really nice quality – who doesn’t love the feel of wooden tokens in your hand and thick cardboard pieces.

As mentioned the stickers on the sigil guilds doesn’t stick so well, unfortunately. And the worker cards are very very thin, they work, but it would have been great if they were a bit thicker; which would also make them last longer. Moreover the player boards are a little on the thin side.

There is a small insert, which just divides the box in two. It’s better than nothing, well it’s not just a thing divider, but thick cardboard. It barely fits in there, and you need to use bags to keep it organized. Game board close up Solo setup (with a paw) Player board - one example 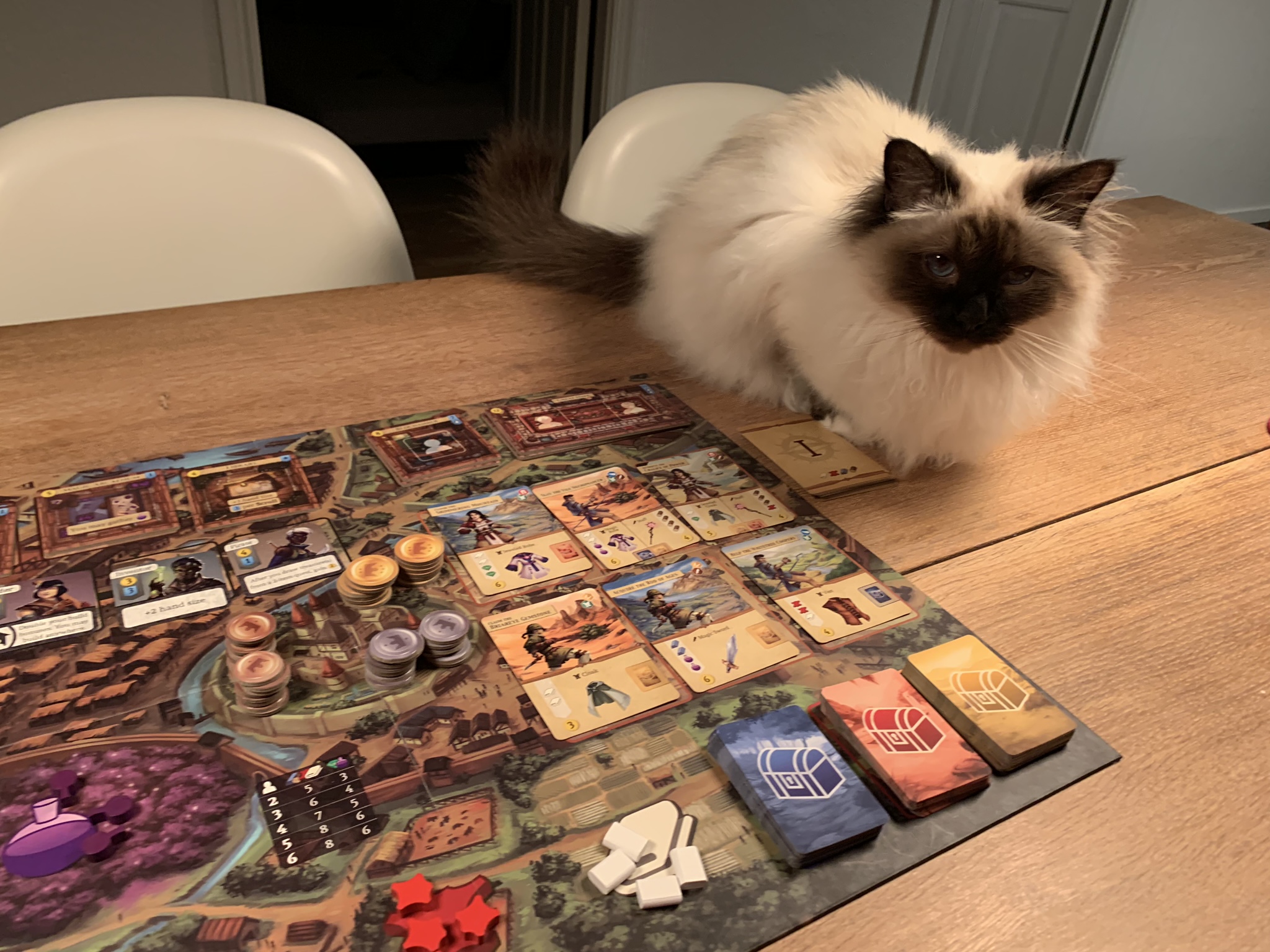 Just sitting here, not touching anything 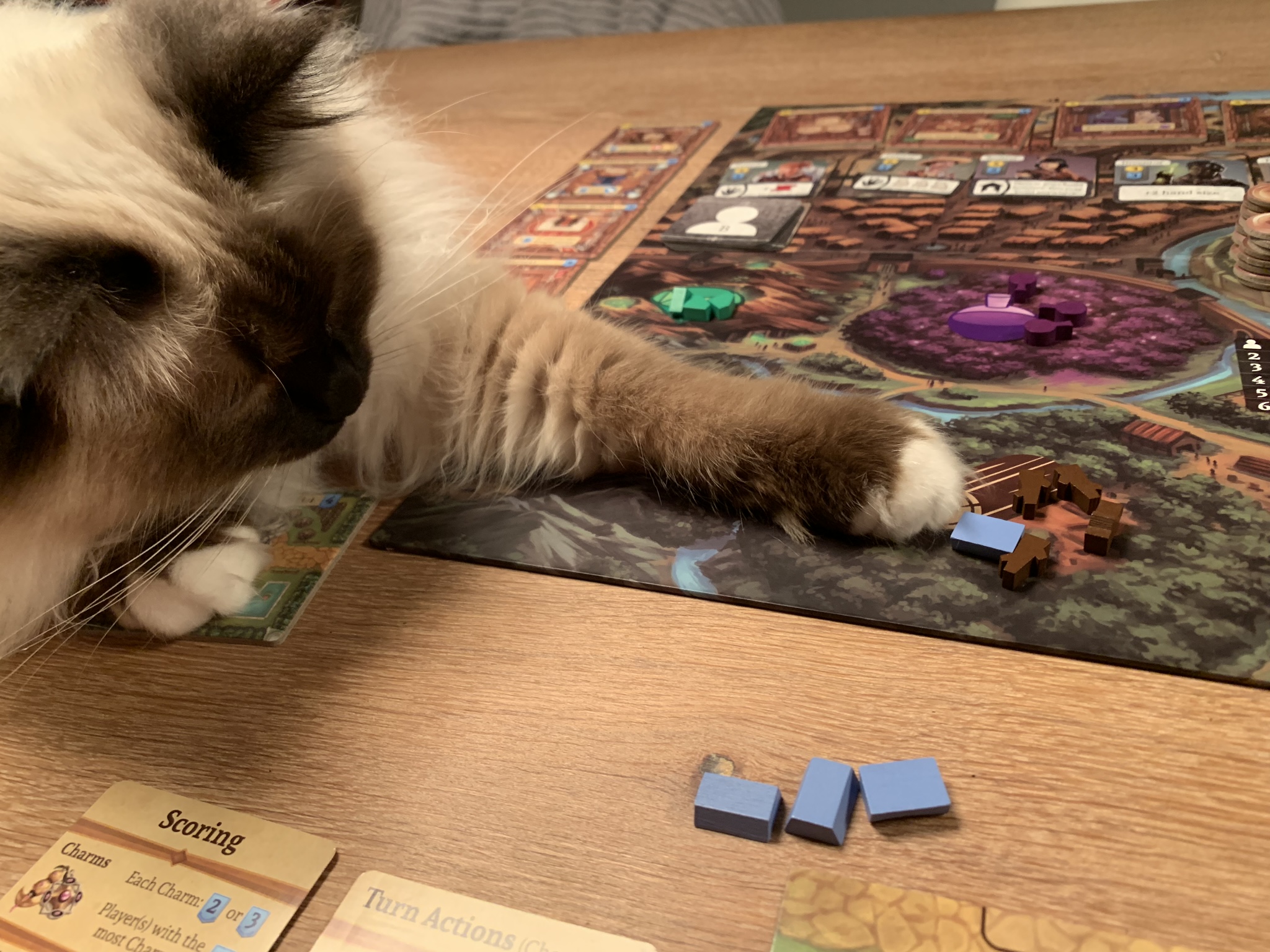 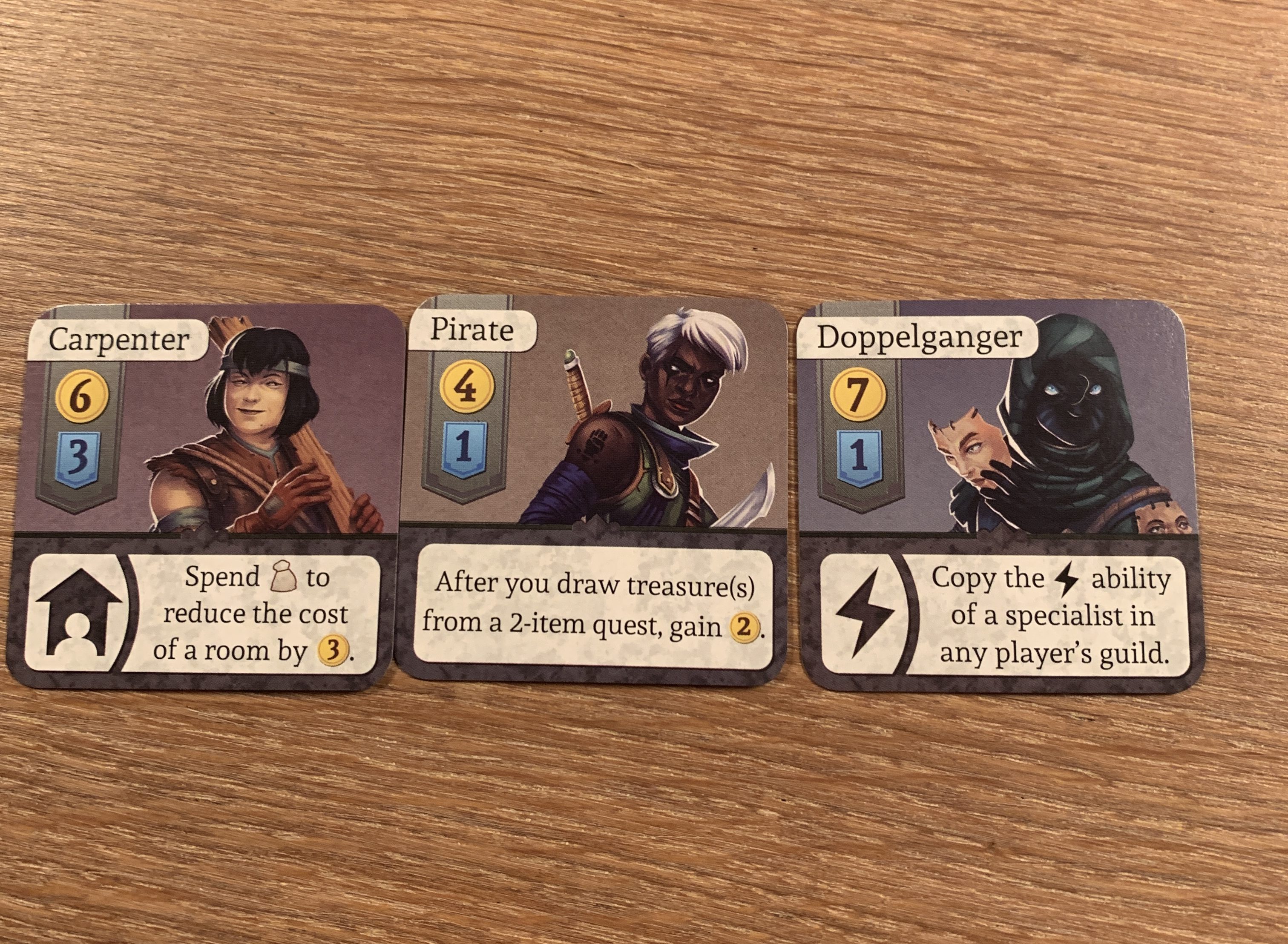 Sigil on a 2 item quest 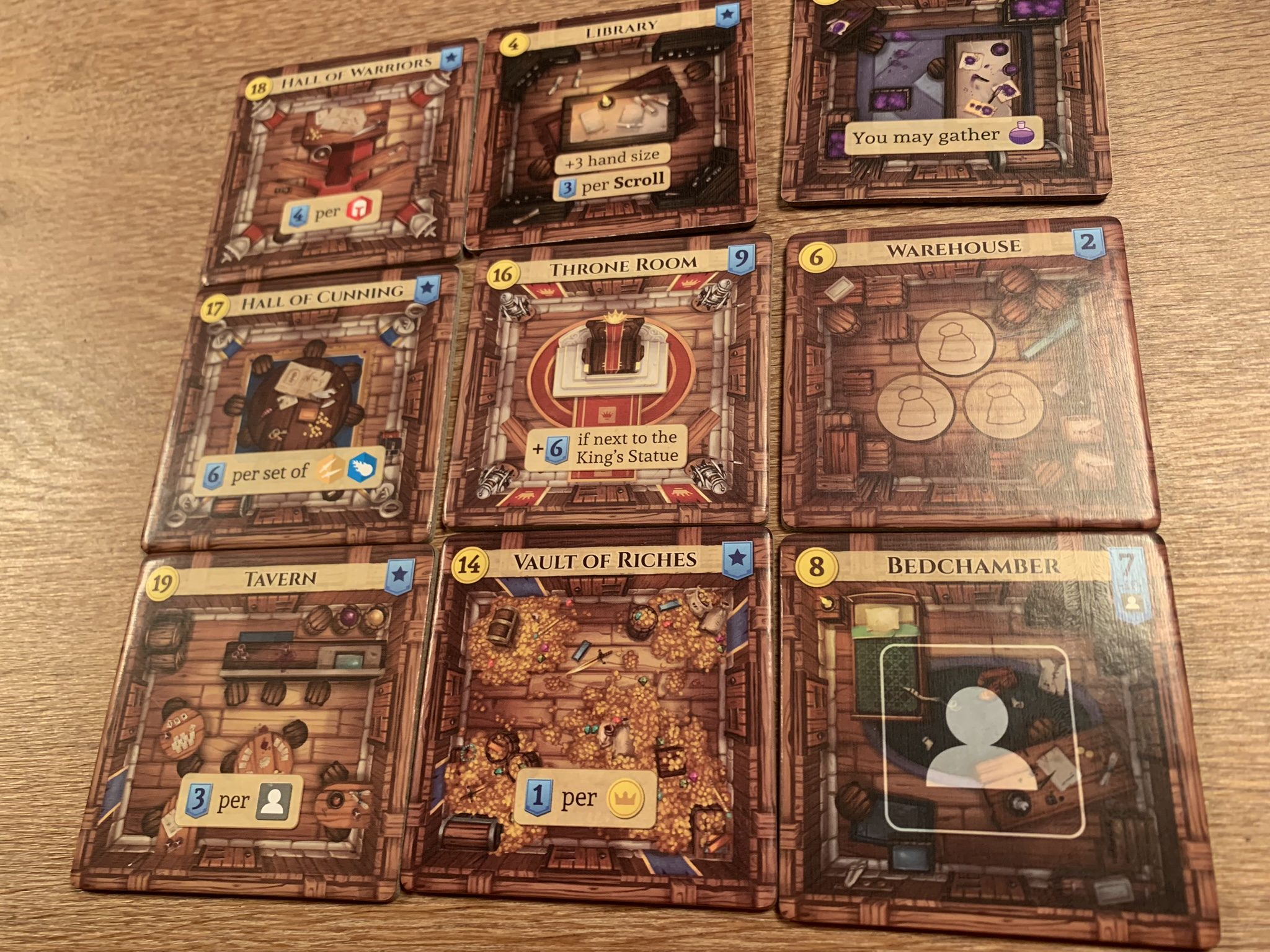 Some buildings to build - The Vault of Riches seem very powerful Treasure cards, each color focuses extra on one kind of treasure 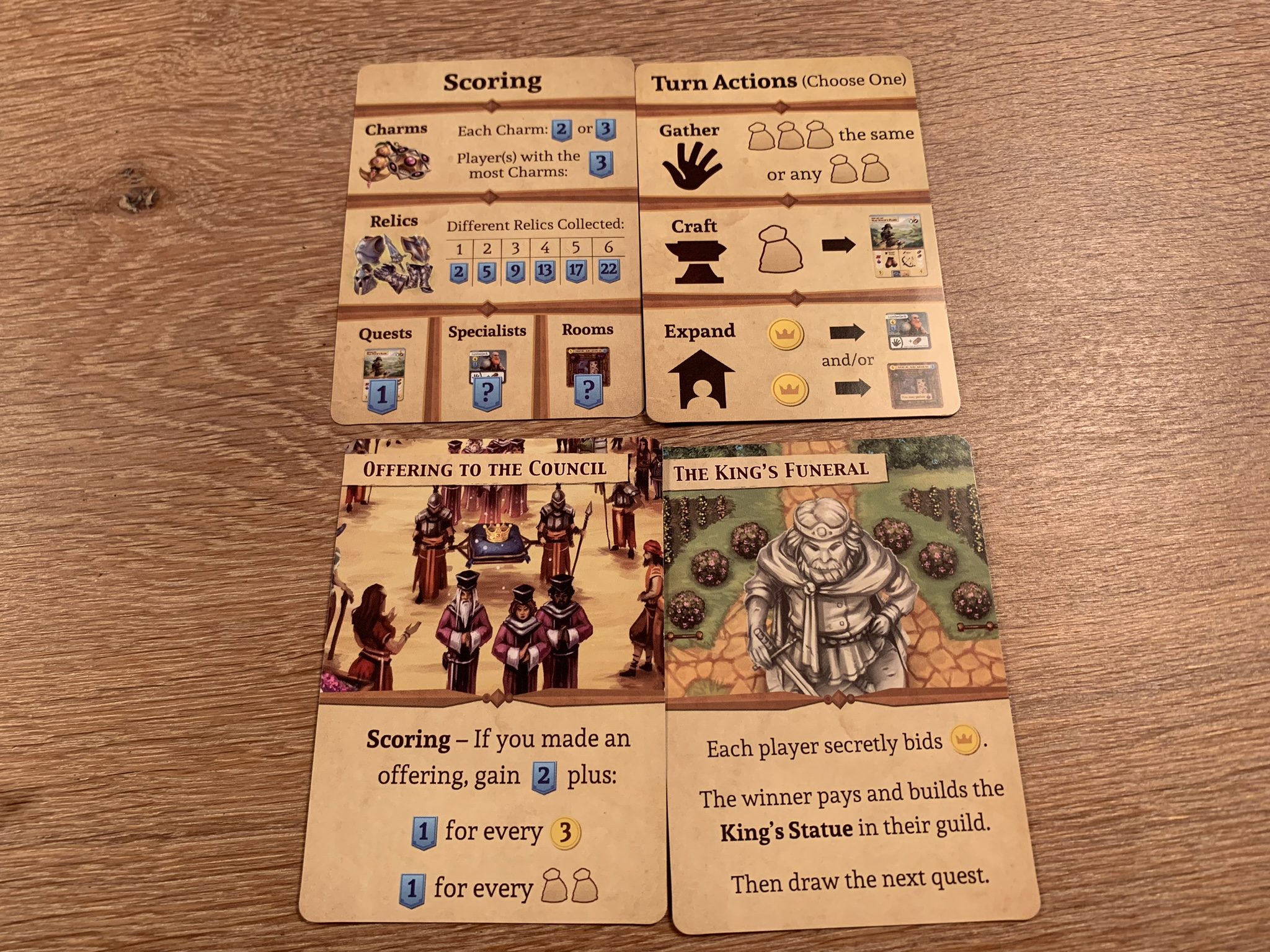 Quest cards, with the top ones being a 2 item quest Reference cards and the special 2 cards, midway and end of game Uh I love tokens and cards. So much to mess with. I do wish there were some dice involved or something to make some noise with, but taking control of the whole board with just sitting on it and pushing cards and tokens is one of my favorite things to do. I like that I can be the center of attention and make everyone look at me. I know there is still the individual player boards which I can’t mess with all at the same time, but as my human also plays solo, it’s good enough.

The box is a little on the shallow end, but I can still fit in there, if it’s just short rests.

The cards are thin, and even though I like to make it difficult for my human to play and fully enjoy the game and I don’t want to ruin the game; I want to play again.

Cardboard Stacker
Just be aware that they list it as 2-5 player, when it in fact is a 1-6 player.