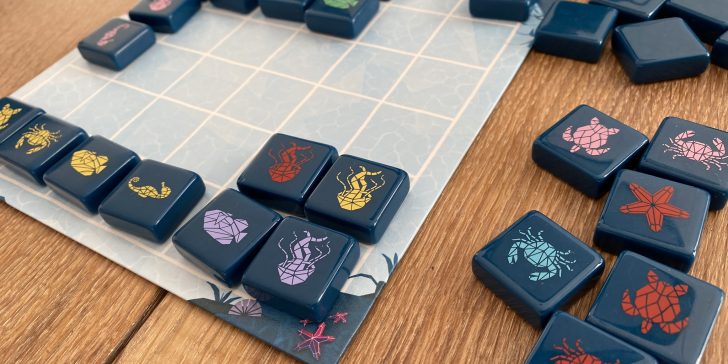 Ever wanted to rearrange sea creatures – well you can in Aqualin, because, why not?

In Aqualin, which is a 2 player only game, you are either focusing on colors or creatures. Your job is to arrange either the colors together or the creatures. The rules are simple.

On your turn you have an optional action of moving one of the previously placed tiles (of course the first 2 turns it doesn’t make sense), then you pick one of the 6 face up tiles and place it on the board. Your turn ends with flipping one of the face down tiles to the other side.

What you want to do is annoy your opponent the most you can but still trying to group together the tiles to fill your objective. Usually it consists of breaking up one of your opponent’s group of tiles and just sliding in your new tile to make it score for you.

It will in some cases be a “tug of war” and moving pieces a bit back and forth until one player abandons that group or tile to focus on the larger groups they have.

The game ends when all tiles have been placed and you will score all colors (player 1) and all creatures (player 2) separately. In many cases you will share some tiles that will become part of scoring for each player.

I like that the game looks so simple, but still has some depths in it. Mostly I like the game after half of the tiles have been placed, so ideally if it could be seeded with a few tiles it would make it even better, especially since moving the tiles doesn’t really make a difference in the beginning.

I just want to point out that this game can give some players AP (Analysis Paralysis) and I didn’t really think of that to begin with, but there are always so many options – and you just have to learn that you can’t group everything together – you have to let some of the tiles go and focus on other groups.

Boyfriend didn’t like it and I can see why not, as it could just seem like moving tiles back and forth, and sometimes hoping the other player doesn’t see that one perfect piece they should move. And replay might not be that highest for this one.

When both players have played a few times, you should expect there to be a tight score – I had some end with just 1 point difference.

I would still recommend this game as a lighter game, if you don’t expect to get something really extraordinary, but it feels relaxing with a silently battling of creatures.

I wouldn’t say there is a huge amount of strategy and complexity in this game, but there surely is something to think about, because even though you are just moving a tile and placing a tile, it requires some thought as to which tile to move, in which direction and how far – also keeping in mind how many of each tiles are left. And then which tiles to place where. Obviously you want to keep your opponent at bay and always focus on grouping your tiles – but at some point you have to abandon a specific group of tiles and focus on the best scoring ones – there surely is a battle till the end.

I might house rule this, also to speed up setup, but the first (any maybe second) move for each player is kind of pointless, and always the same, so why not just take some randomly and place as a setup. This could also be a fun way to make the game different, using some different setups at random.

I would say replay is fine, but it wouldn’t be my most played game, but come out once in a while. The replay comes into affect that only 6 tiles are visible every time you need to pick a tile to place and trying to adapt to what is already placed and the constant movement of the pieces. But there isn’t much variability. I would say if you had more tiles and only saw some of them, you wouldn’t necessary know which tiles to come up and therefore plan differently (not waiting until for example for the last sea horse comes up).

This is a strictly 2 player game, and the score will therefore be 1 star, but I won’t hold it against the game in the overall review, as the game doesn’t claim to be played by more.

The rules are very straightforward, it’s just a small leaflet with a few pages. You either focus on scoring the animals or the colors and your opponent does the opposite. You have the option of moving a tile and the place a tile, easy as that – we had no questions and could dive right into playing.

There is no official solo variant and while I think there could be made some solo variants, it would require either playing the best you can two-handed or some extra maintenance with an AI or dummy player, but I would be willing to try. Again I won’t hold it against the game.

Actually the first game I played of this I played remotely. The setup is fast and it doesn’t take up much space, and best of all, there is no hidden information, only thing I had to do was of course move the tiles. And the components are easy to see, even on the screen. It worked really well and we have played a few games like this.

The game is very portable; all you have is a square board and a handful of tiles, which could easily be transported, even for a plane ride and playing on the plane as well. Playing this on the beach in the sand could be fun, with just drawing the lines in sand as your board – that is if you are not too fuzzy about your game, which I tend to be 🙂

The tiles are gorgeous and with nice streamlined art, simple and relaxing; nice chunky tiles and as you know them from Azul and the like. My only complain is the colors, blue and purple are a bit harder to distinguish especially playing remotely through a camera, but it can work.

The game board could have a bit more clearer lines, especially when we played remotely lines almost disappeared (because of the light as well) – it’s not so important mid game. But I know what they were going for – for it to look like the ocean. The board is not too thin, but it’s still very light – meaning the board swirls around every time you want to move a piece, so either you hold on to it or place it on a different surface. When you have put some pieces on it they help weigh the board down. And those are the components, a board and a bunch of tiles. 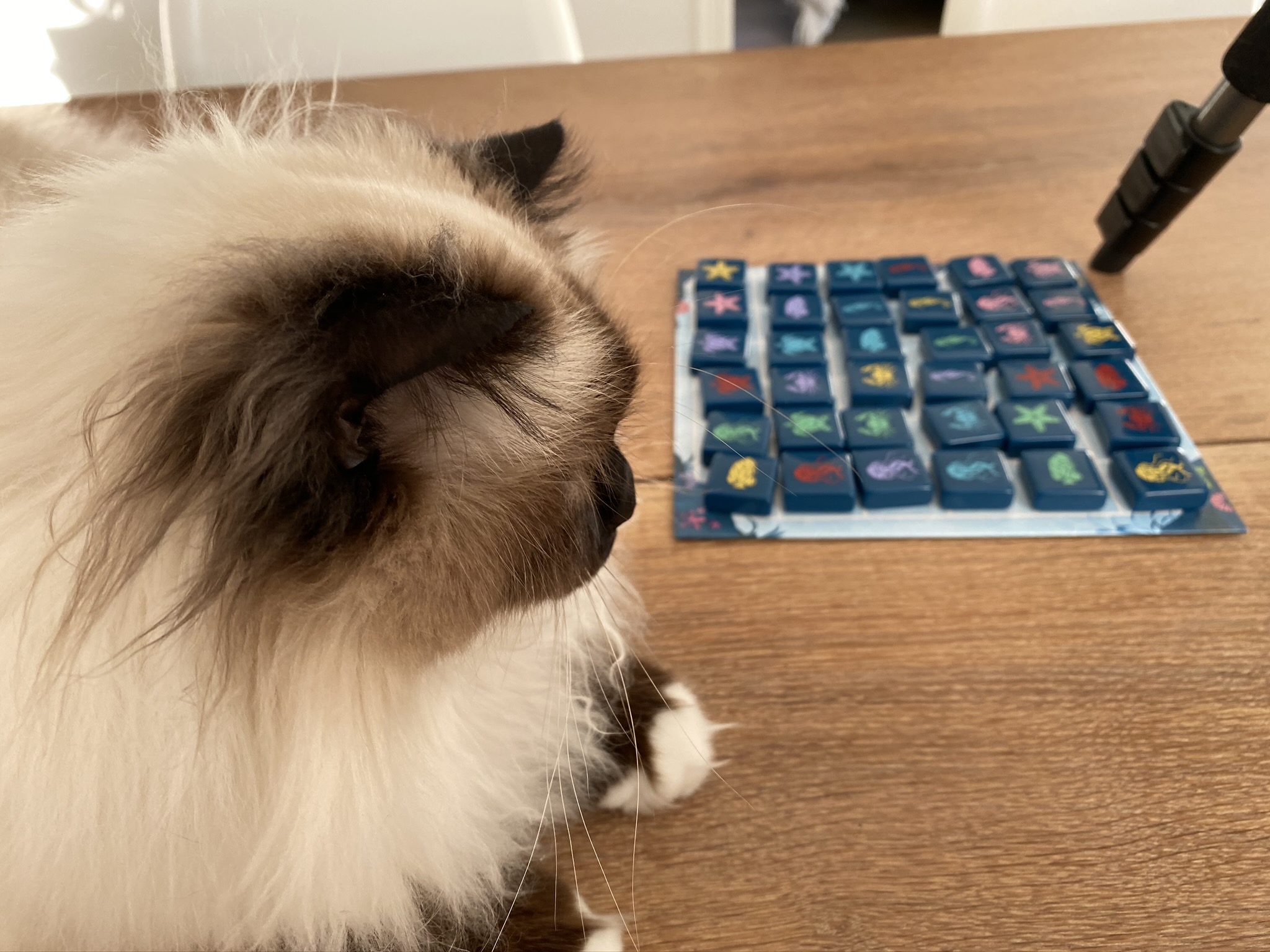 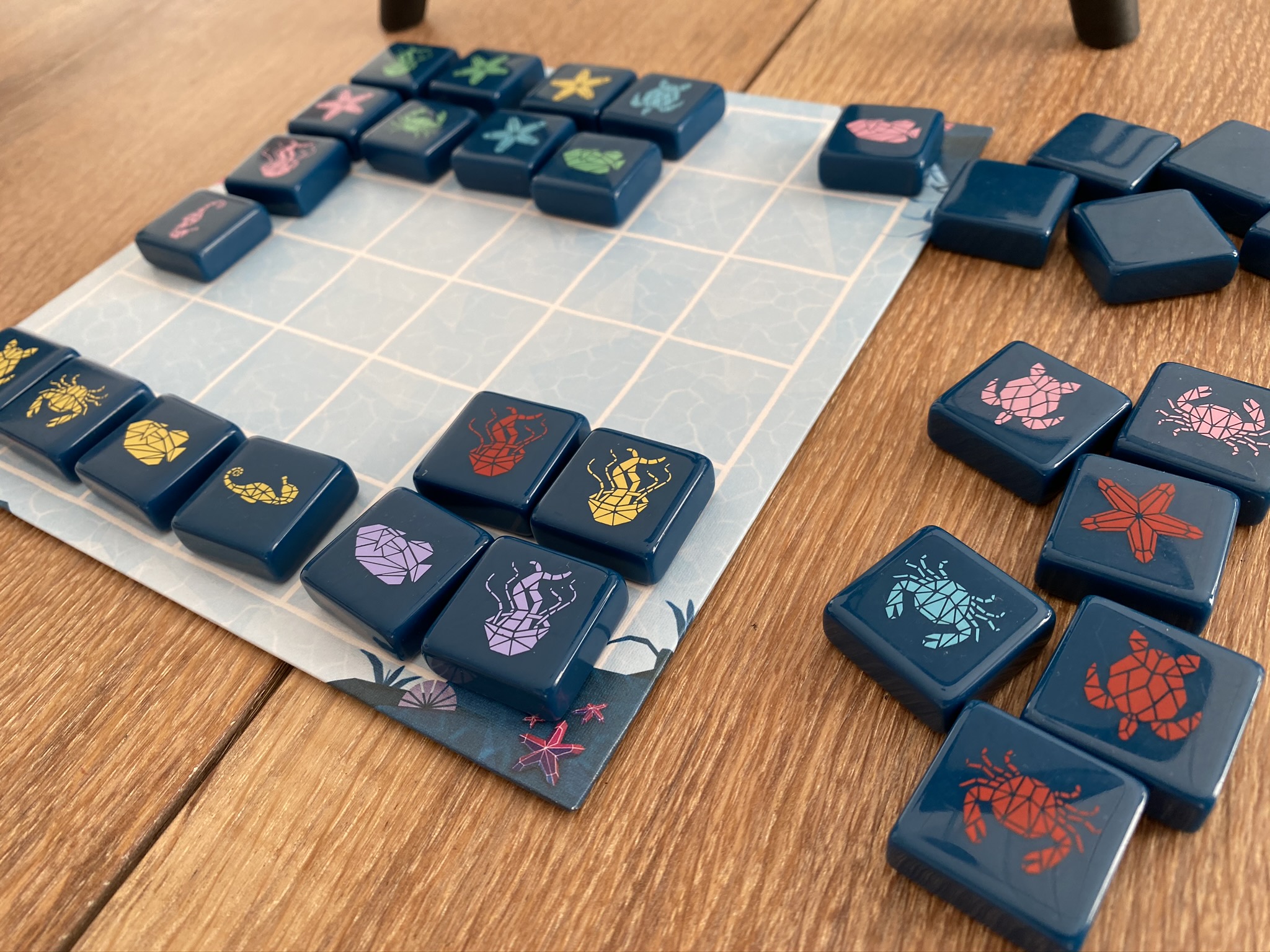 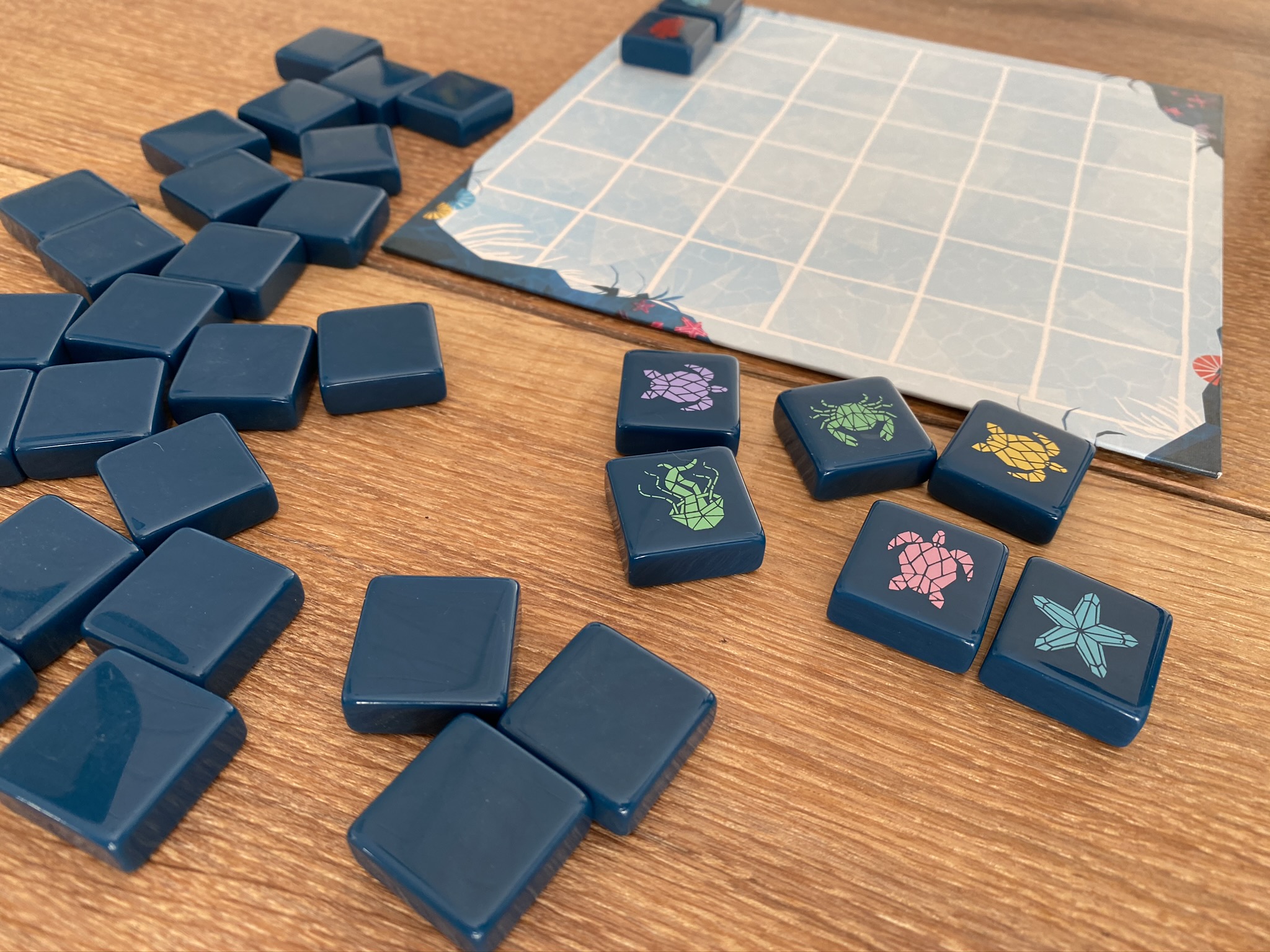 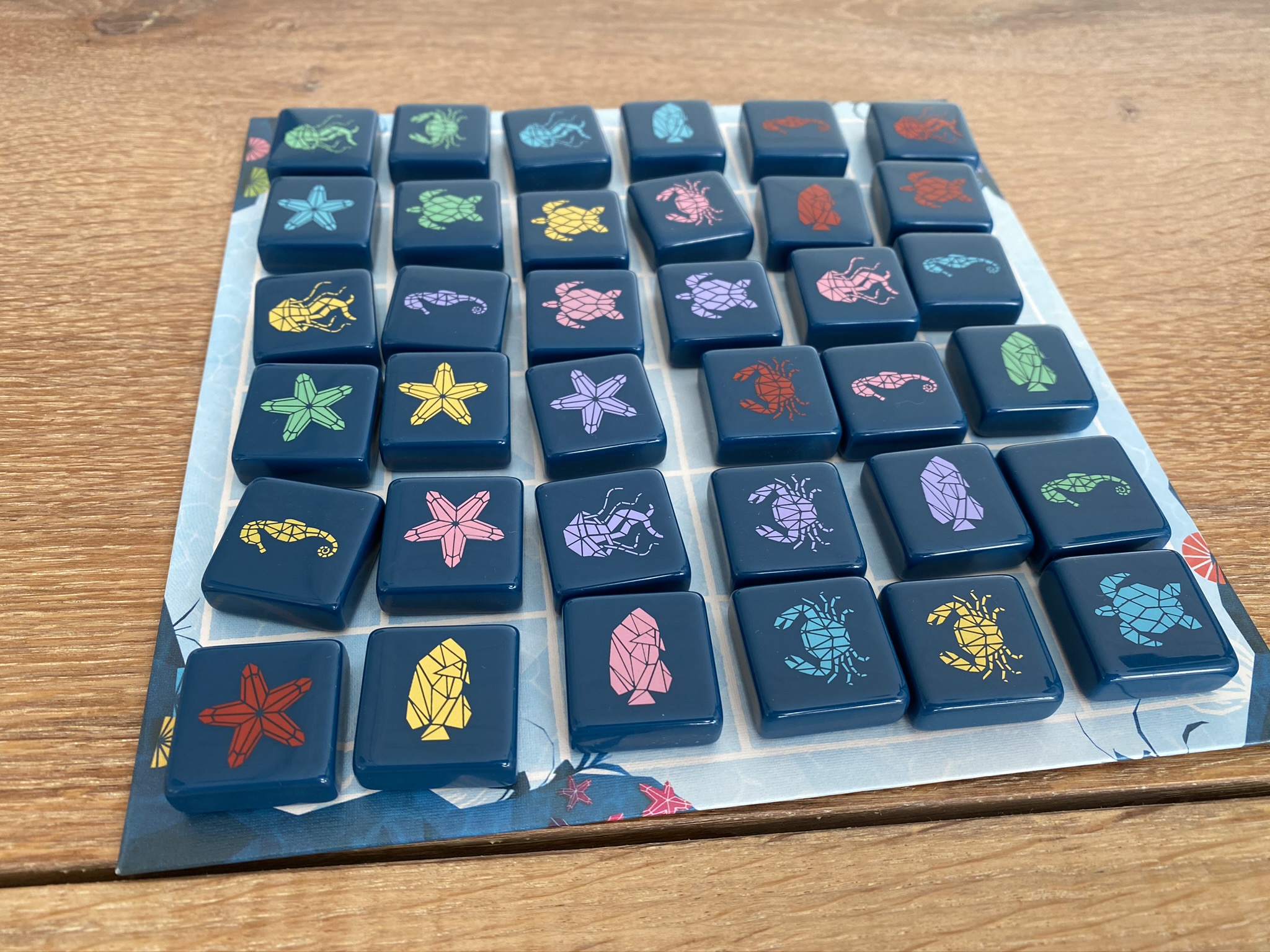 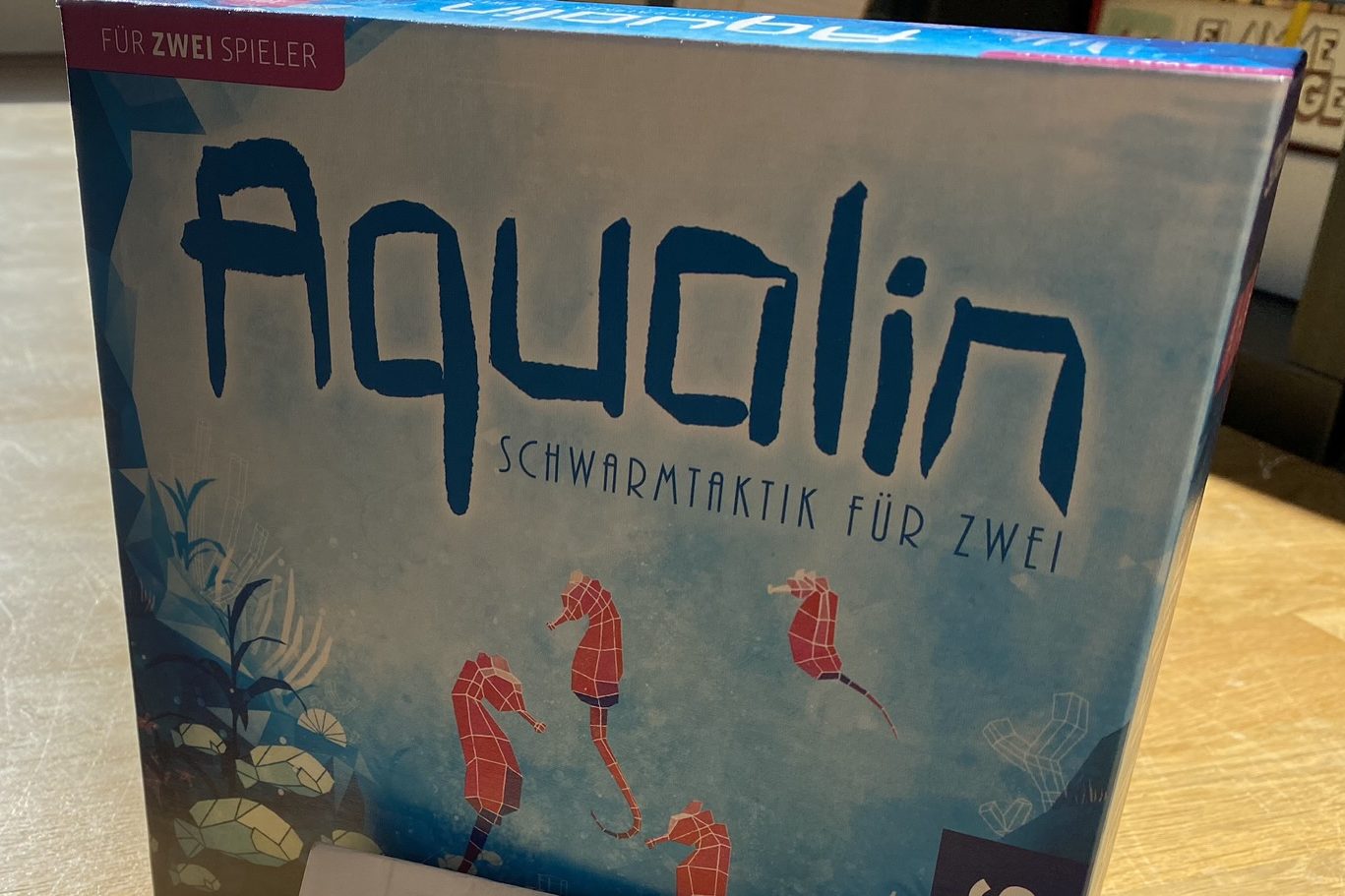 What can I say, the box is too thin and small – I can lay there, but that is just to show off. There are not many components to play with, and they are a bit too big to really push anything. Now once they come onto the board, which is a bit slippery I can just slap the board to make it all spin and shift. I will just say that this game is not my first pick and I will only initiate playing with this if I’m really bored or my human seems to be in a mood to easy annoy her.