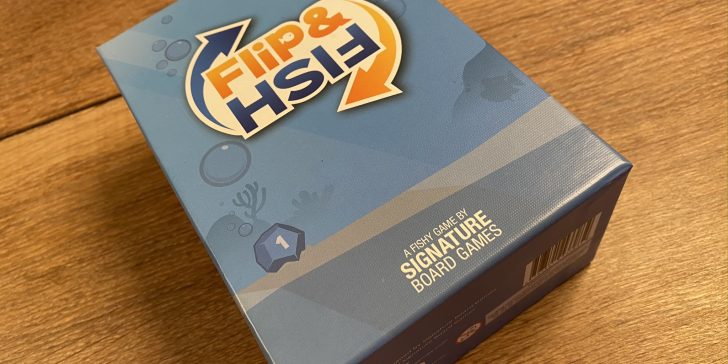 Catching fish in your living room has never been more convenient, but it’s still not easy and requires practice to get those special trophy fish everyone is talking about.

In Fish & Flip 2-4 players will race to get the best fish first and setup is easy.

In the center of the table, with equal distance to all players put out 5 face down fish cards (you did remember to shuffle the deck right?). Give each player a jetty card which also happens to be a ruler and a player aid and give the first player a D12 die. Setup the shopping deck with 3 face up cards – this shop will only be available after the first trophy fish has been caught.

Each player takes a turn flicking/rolling the D12 on or off their jetty in the way they see fit as long as it makes a full turn. We experienced that flicking a D12 is not as easy and requires some practice or dumping the die on the jetty making it roll instead could be a way to go.

Your goal is to try and hit the fish cards in the middle, as long as they are face down, it doesn’t really matter which one (unless you saw the cards with an equipment card).

After this, you can now use the ruler part of the jetty to measure the distance from the D12 to the cards, if any are within range, the closest fish card is flipped. Now check the die value in the top left corner, if this is lower or equal to your die roll you caught the fish otherwise you missed. If you happen to get the die on the card itself you get to add 2 to your die roll (if the die only touches the card and not the surface). It can also happen that you roll a 1 then you instantly miss and have to lose any bait used and a previously bought equipment card and in a 3-4 player game the next player can’t fish and has to do other actions.

Using bait before fishing can be a vital way to get your value of the die up – the sum of the fish (top right corner) is added to your die roll, and if the color of one of your bait is the same as the fish you are trying to get, you can also add +2 to your die roll (mostly you are fishing blinding so it’s not easy to know). If you miss your roll, you keep your bait, but if you at least get a bite you bait is lost.

In stead of fishing you can acquire equipment cards from the shop, just take any of the face up cards or from the top of the deck. Only one card can be bought and it will be displayed in front of you face up (hand limit of 3). The cards are either one time (use and discard) or multiple use (to use again take a flip over cards action) or ongoing affect.

Note that some fish cards have actions when flipped, caught or missed – this introduces a party-like element to the game.

Flip & Fish is a small and easy going game that plays fairly fast, unless you are very unlucky or really bad at fishing it can drag out – kind of like in real life fishing 🙂

I like dexterity games, and boyfriend (who hates games) also like some, but usually the rules are much more simple – just flick or stack and see how it goes.

This game is a bit of a mixture of having to manage cards and flick, but not only do you need good flicking skills (a D12 isn’t as easy to flick I found out) but you also have the luck of the die, not to mention the different fish cards you might flip.

I know the cards were added to give it some strategic consideration, but it doesn’t balance the luck out, yet it’s also hard to win without acquiring some cards. Many people will like the party game aspect this game has added like “roll with your eyes closed” or “use you non-dominant arm” but it’s not really me, and especially not in a 2 player game. This makes it not fall in my (and our) typically dexterity category, but this doesn’t mean it’s bad, just different.

But since the game is quick to setup and you just don’t put too much into it, it can be a fun experience as a warm up game or filler – I think the people you play with matter in this case – so you all can enjoy the silliness this game has.

The game is very simple, and I would think you could play with kids even younger than the recommended 10 years, especially if you play without the special ability cards, just to get their “flicking skills” increased. There is a very small part of the game where the strategic part comes into play – “do I bait my line with extra great bait before trying to fish or just risk it with my basic bait?”. You might also want to think about acquiring some cards instead of just fishing, especially since your fish card limit is 5 and you need 3 (or 2 in 3-4 player game) of these cards to be the special trophy fish in order to win. These equipment cards give you some special abilities to help increase your changes of being successful in your fishing or messing if your opponents.

Apart from this it’s mostly a luck based card game, and without investing in cards to help you, you have to be very lucky to win – that’s how it is with dice. Of course practice makes perfect in order to just get the die to land on or near the fish you want to catch.

There is an element of party game in this, as many of the fish has some special abilities when flipped or missed, which you could play without or keep in if you like to “flick with your eyes closed, flick with your non-dominant hand, etc.” – I think this part works better with more than 2 players, a personally not my favorite kind of game – but there is a time and place for everything.

I’m a bit unsure about the replayability as only the randomness of the cards differs, and many of the cards are the same, at least the fish. But the game plays fast and could be a good start of your game night, a small filler or a party warm up. If you don’t take the game too serious and just have fun with it the replayability is fine for a game or 2.

The game plays alright at 2 players, but I feel the game shines with more players, as it’s not just back and forth – with attack cards you always have to attack the same person. And if you’re both unlucky or untrained in fishing, you might just be stuck for a few rounds – until someone finally flips a fish (and maybe even catch it)

With more players both the equipment cards in the store and the fish cards would be quicker refreshed and just have the same cards in the fishing area for several rounds.

The game play is fairly easy, but there are actually more rules then you would expect for such a quick game. It’s not hard to learn, but there are just a few situations to be aware off; like when using bait to also check the color of the bait or when landing on a card to get extra value on your die. You can quickly get going with just playing as you go, and later getting all the small rules in place. We just had to check up on the fish ability of “missed”, but got it quickly sorted out, and just when doing this review I actually noticed that using bait can give you even more added value to the die roll if the color match the fish.

You have to carefully read each fish cards as some applies to just the active player and some for all players – but it helps the cards explain it and you don’t have to have the rule book ready.

There is no solo mode, although practice makes perfect, so practicing your flicking skills is always a good idea. The low rating won’t affect the overall rating, as it was never promised to have a solo mode.

I never like to admit that a game can’t be played remotely, but I honestly can’t see a good way for this to work remotely as all dexterity games are almost impossible remotely.

The game is very portable, it’s “just” a deck of cards and a die – the box is bigger than the content so just bringing it in a smaller container or bag makes it even more portable.  I wouldn’t play in the wind, but otherwise playing outside shouldn’t be a problem, maybe it could even be fun playing in the sand to really get in the spirit of fishing.

The icons and the text on the cards are well made, and the artwork focusing on the cute and simple lines – I just wish that each fish was a bit more different – for each color only small difference in the eyes are made, even though they behave a bit different. The die is a simple but good quality die, but I do wish there was more than 1 especially when playing more than 2 players, as passing the die back and forth seems to take more time than the actually game play.

The card quality is decent, but on the thinner side and I could worry they would get very easily worn. I like the multi use of the jetty as the take off spot for the die but also as a ruler for seeing if you caught a fish – the back side is also a rules reference aid. The box is a really great quality and has room for many more cards. The box could have been smaller with this small about of content, but good not to have to squish everything in. Only small complain is the jetty cards and rule book are too big to be in the compartments of the insert but too small to fully fit on top. 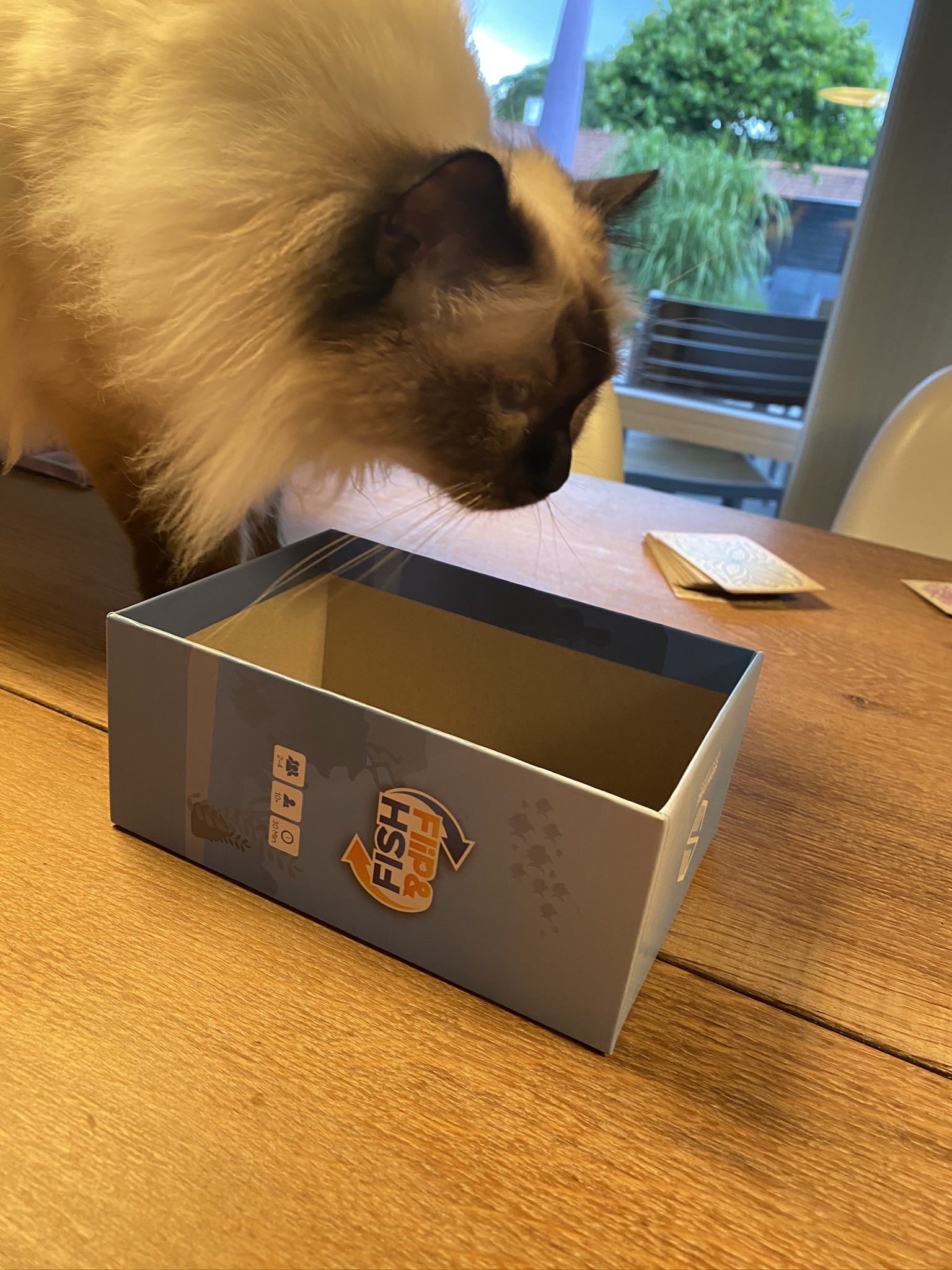 Helge inspecting the box - do I fit? 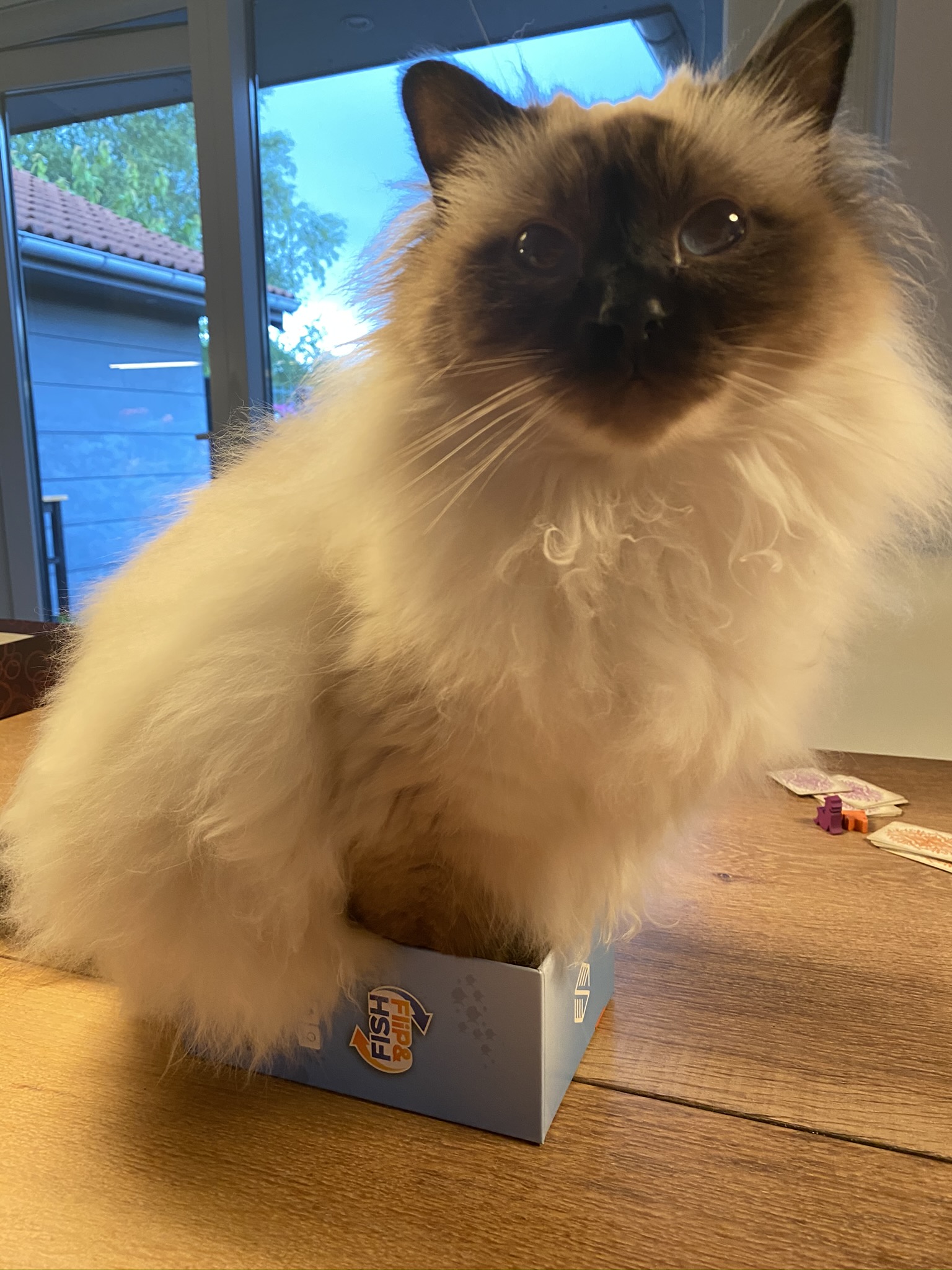 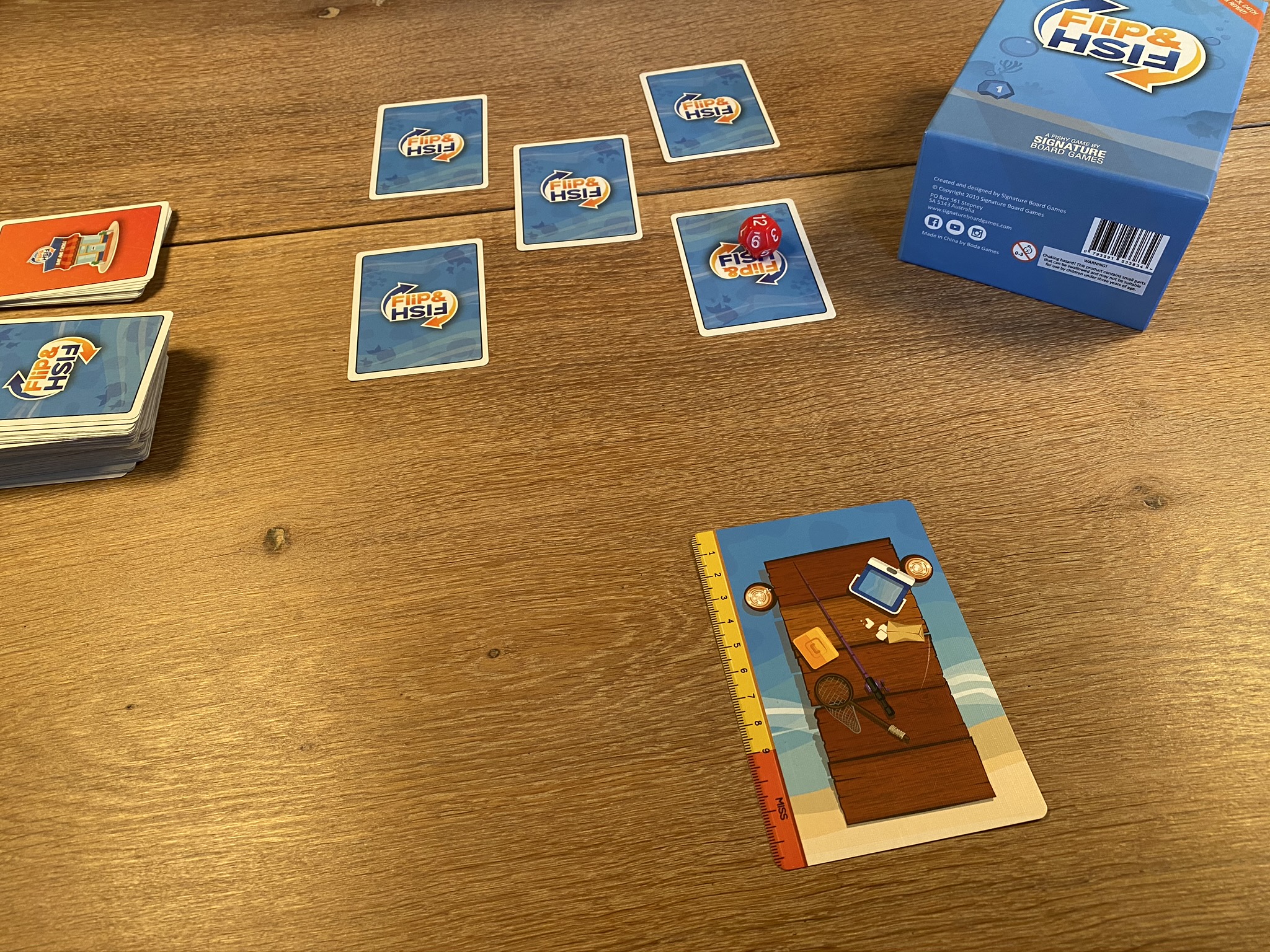 Setup of game, independent of number of players. 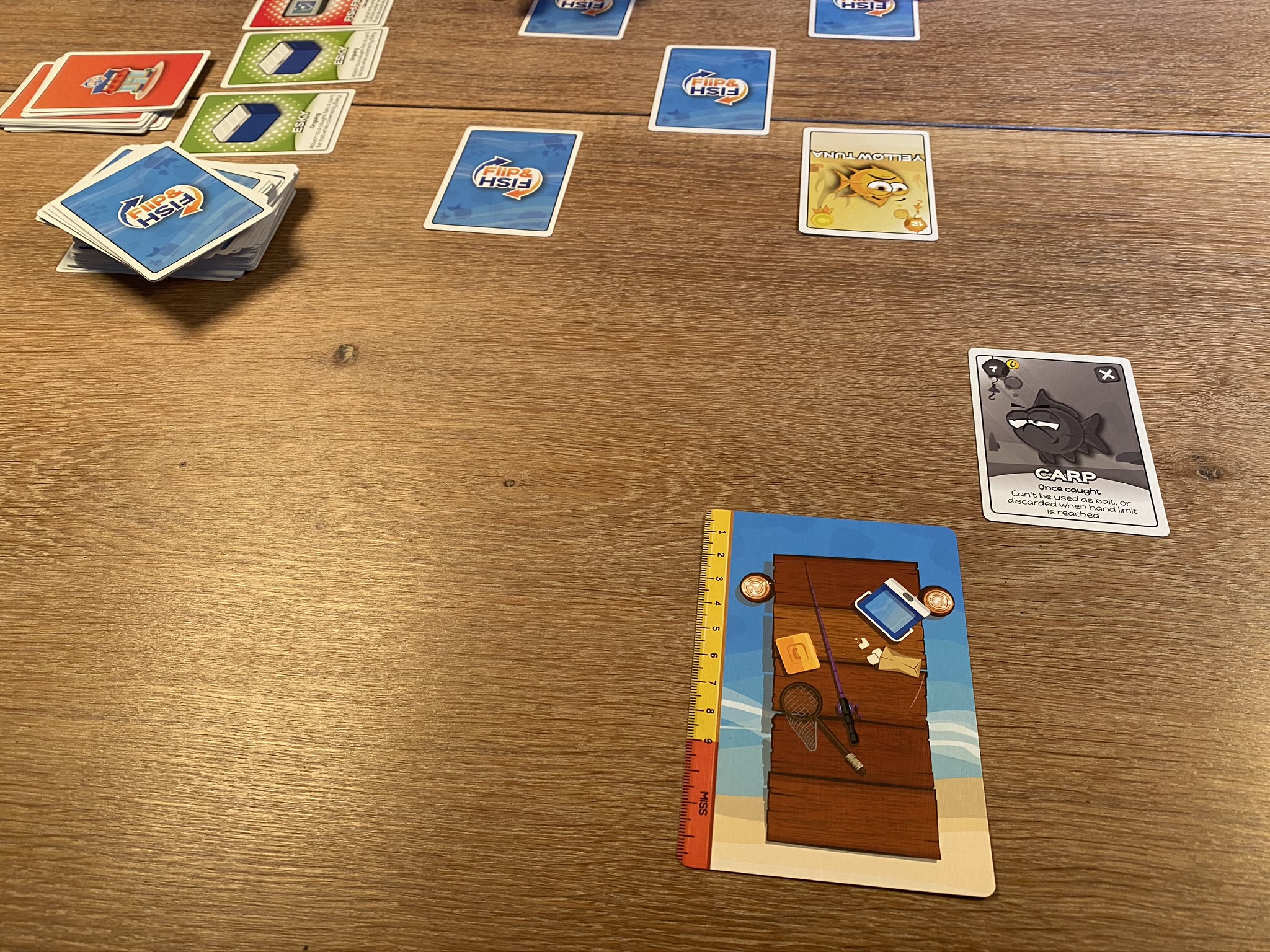 Oh no I caught a carp 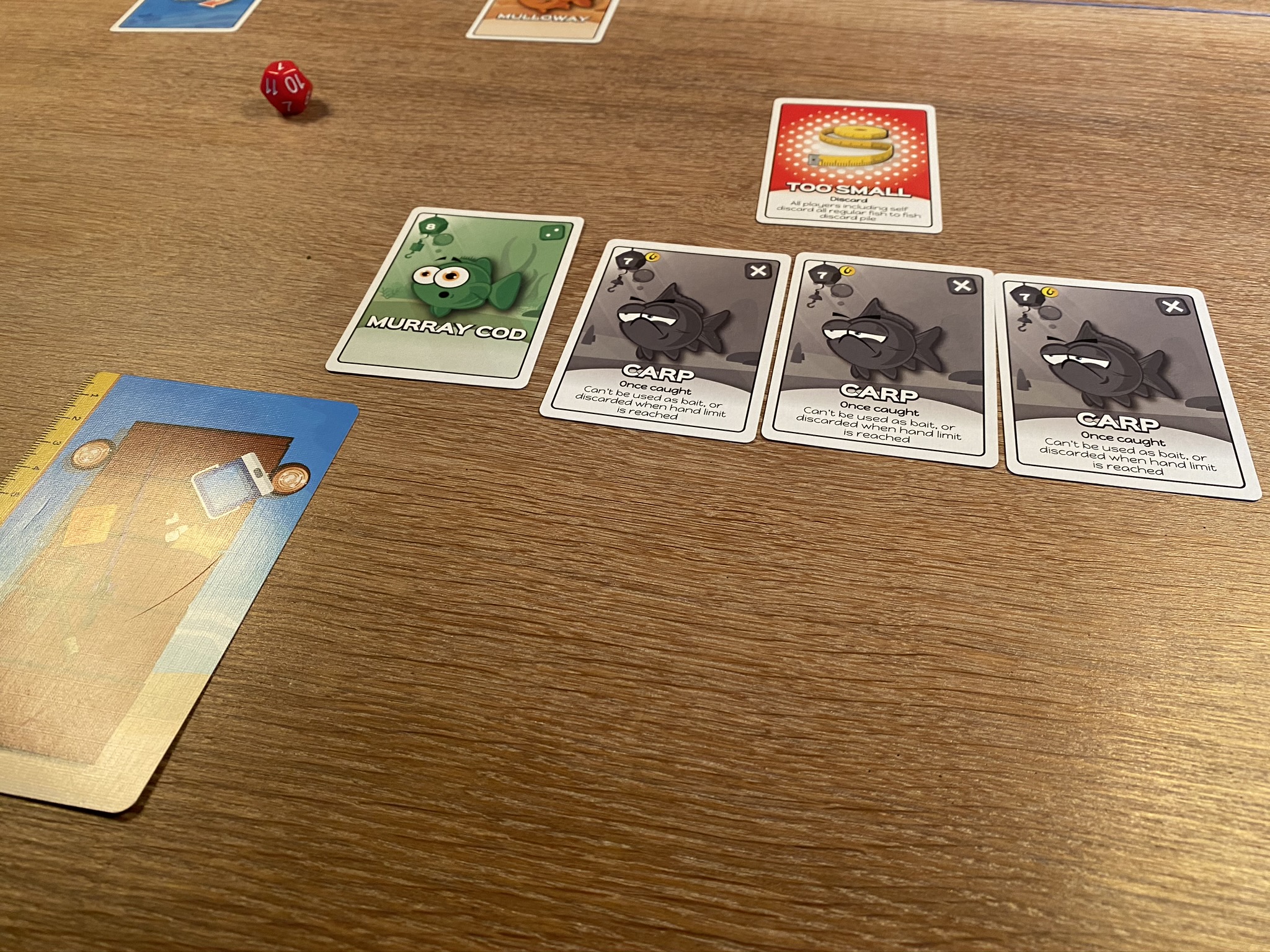 So unlucky - 3 nasty carps clogging up my hand 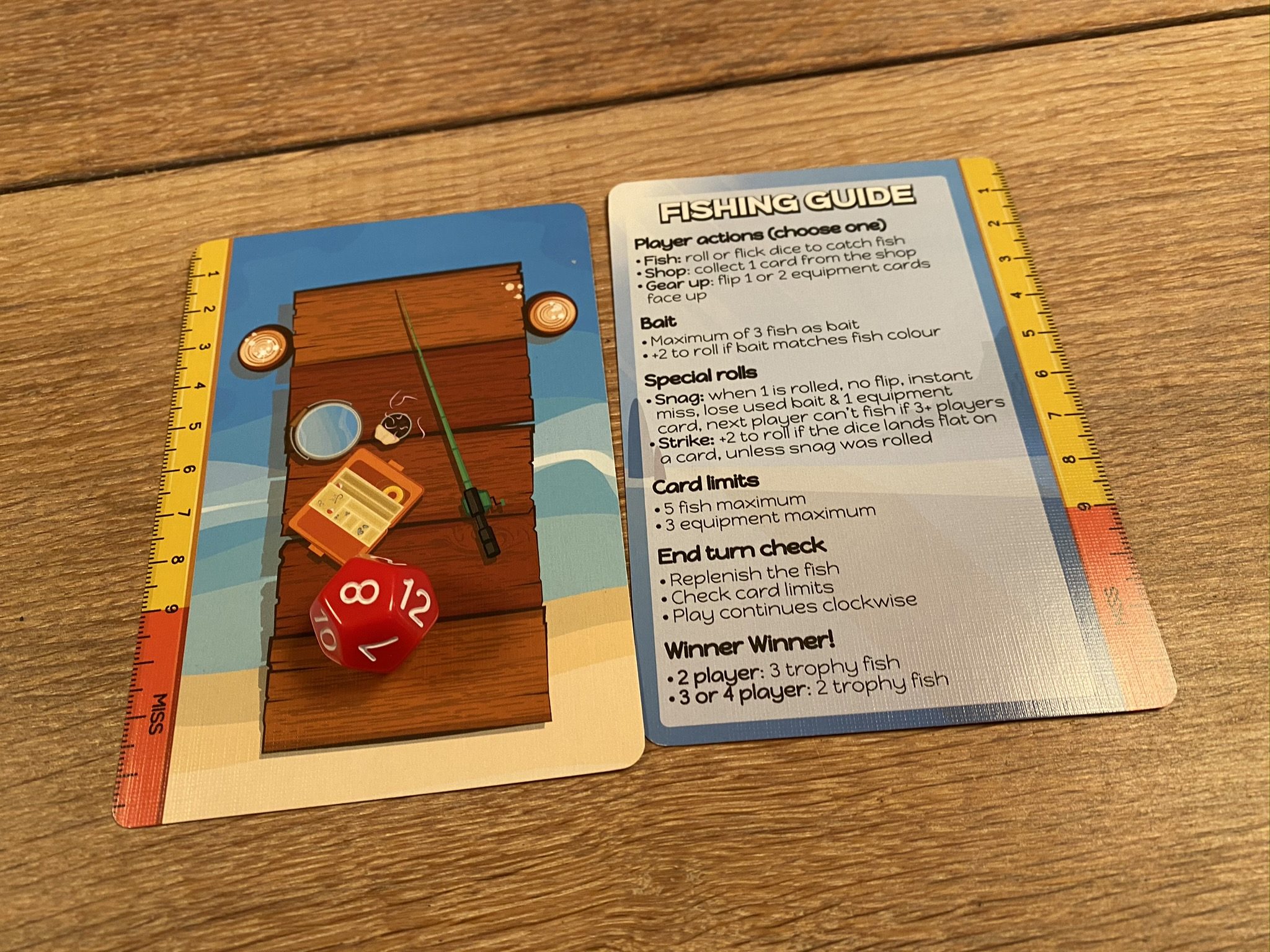 Jetty to roll your die, ruler and player aid 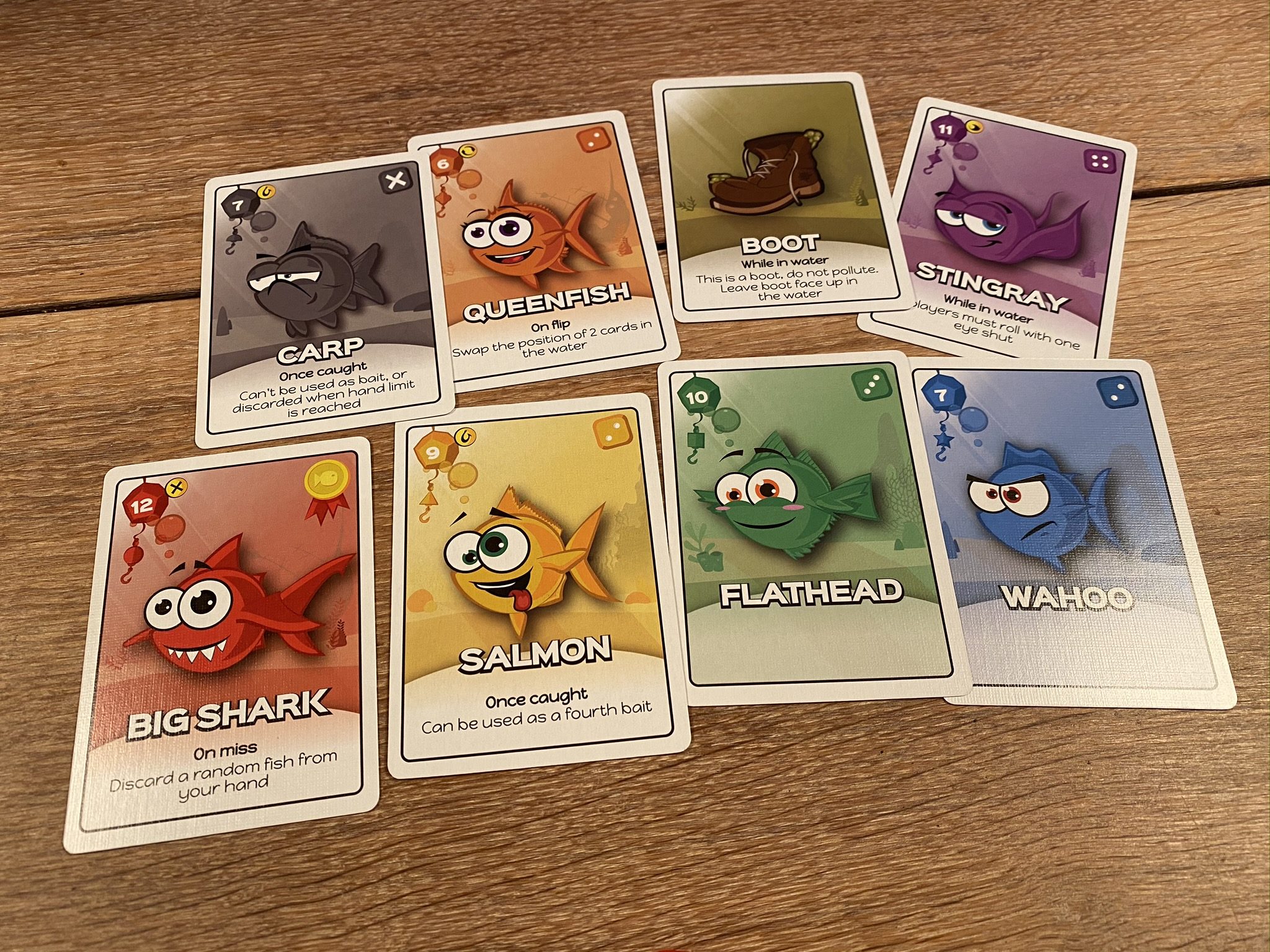 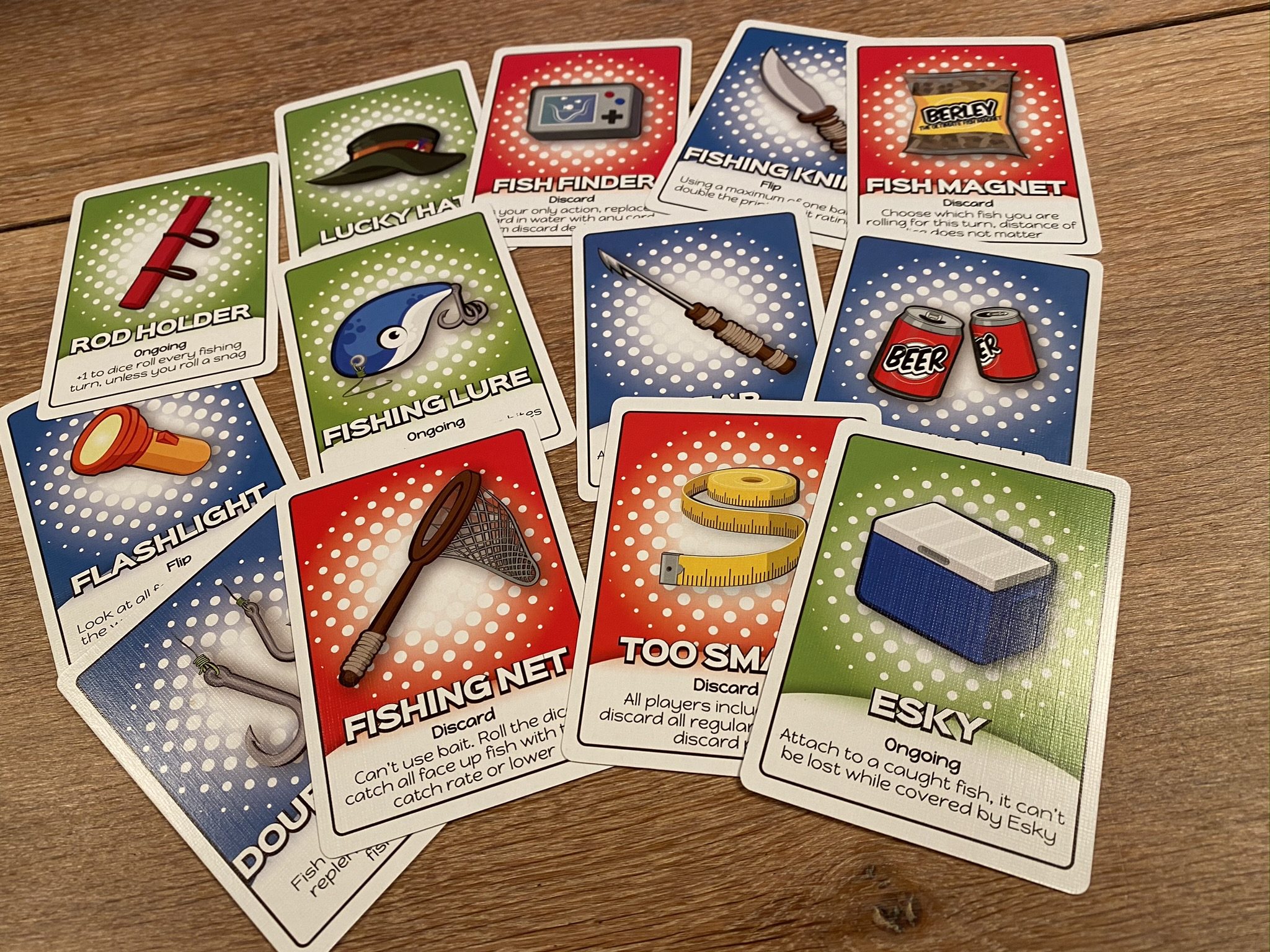 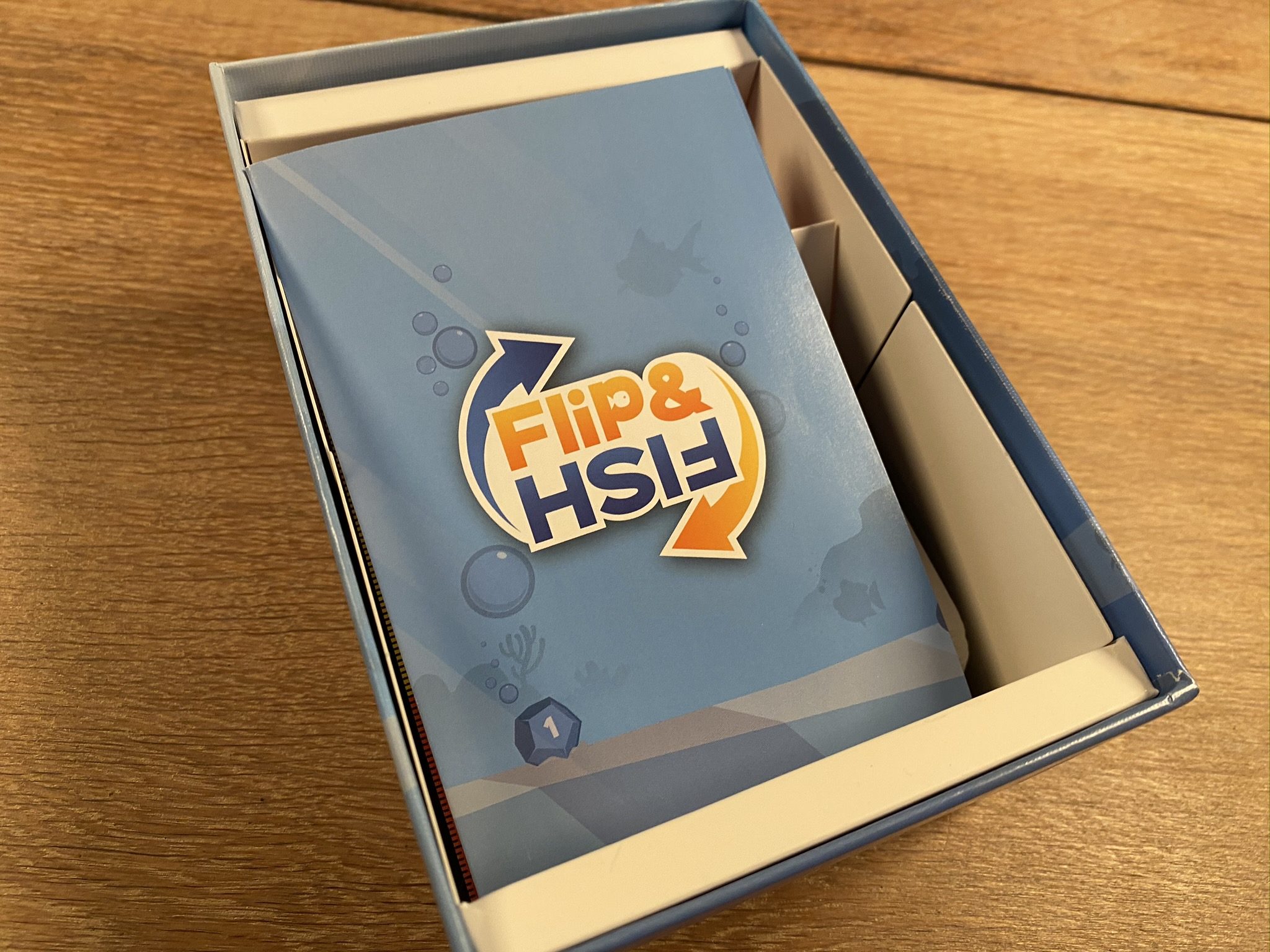 Inside the box, rule book and player aids fits, but not perfectly 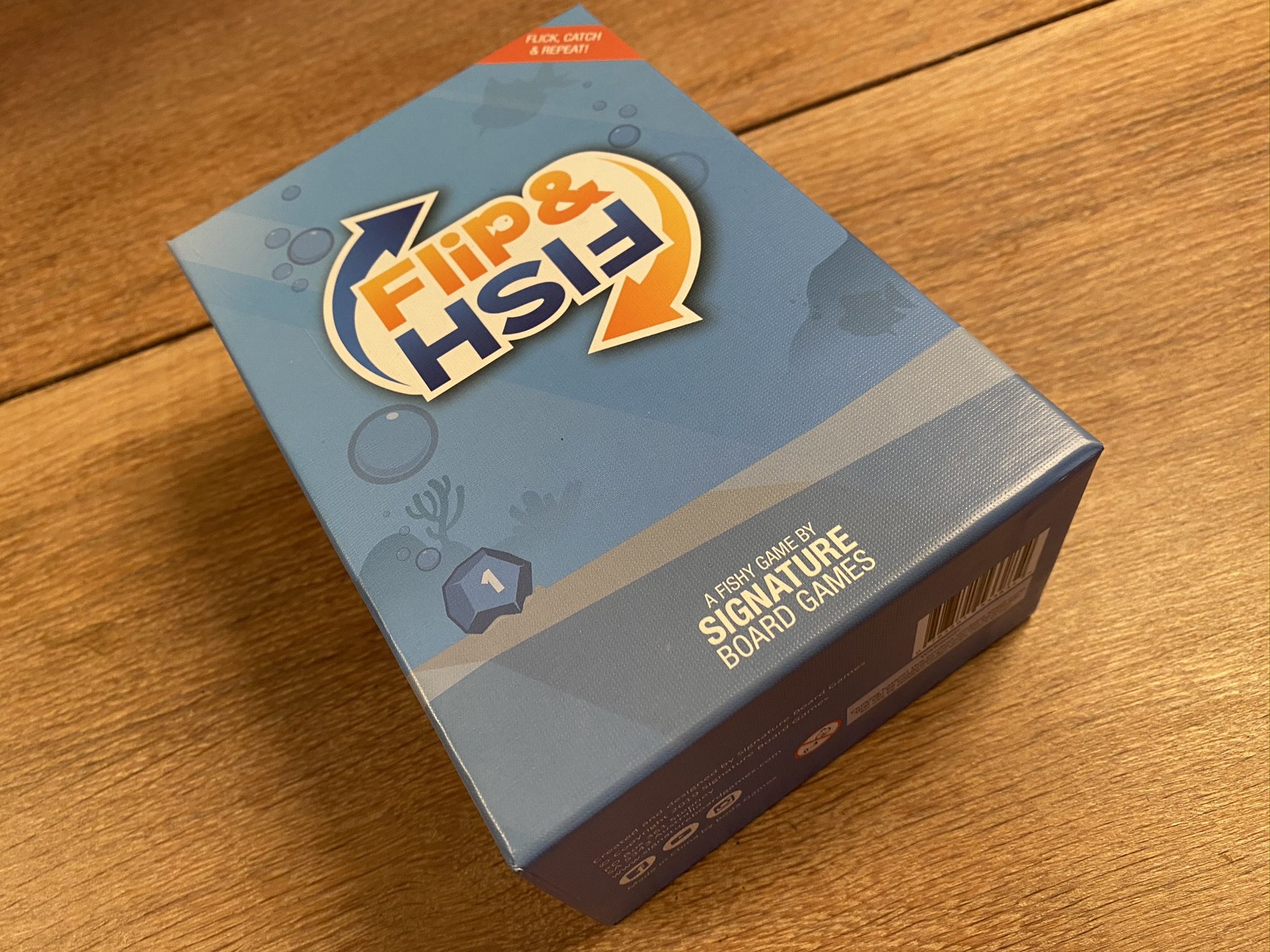 I’ll never admit it, but the box is too small for me. I do however need to try out a box and see how I can use this – this is purely a sitting box. It’s sturdy and it matches my eyes, I’ll give it that.

Not a lot of components, but cards, which need to be on the table during play are always a good thing, and easy to disrupt – and dice are good, but there could have been a few more to play with.