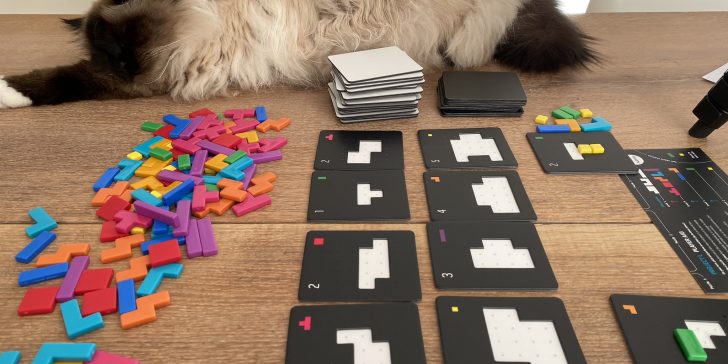 Don’t let the beautiful pieces fool you, your brain will have to work a little harder when completing puzzle, competing against others.

Whether playing solo or multiplayer the game plays out the same with only minor changes for solo play. Setup is fast and easy, just spread out all the pieces (separated or just in a huge mixed pile). Shuffle the black and white puzzles separately and remove a number of black puzzles according to player count.

Make a stack of white and a stack of black puzzles and reveal face up 4 from each stack. The game ends when the black stack runs out and 1 more round is played. You also get a special action in the end to try and fill your puzzles, but for every piece you place, you get one penalty point.

The game is played over several rounds, where each player has 4 actions, they can all be the same or different, but you can never do more then 1 Master Action per turn and I see why – it’s very powerful.

In order to score points, you have to fill your puzzles – most give you points, but all give you a new playing piece and you even get all your pieces back every time you fill a puzzle, so your personal supply of pieces grow throughout the game.

The 5 different actions you can take are:

So trying to build up to the Master Action to fill on as many puzzles as possible seems to be key to the game.

I played this at Essen 2019, where is was a prototype, but still very nice components already – we just played a quick little game.  I lost but I quickly got the hang of the game and how interesting it plays and I like tile laying and the extra twist in this made me curious and wanting to check it out further  (it was shipping to Kickstarter backers)- I was excited to be able to play and review this before their reprint and expansion on Kickstarter. Especially the solo mode I was eager to try out.

Having played it again I can see why this could become a hit – it’s not just another Tetris style board game; you actually have to think and plan ahead. I played this with my board game hating boyfriend and he gave it the big rate from boyfriend “it’s ok” – which might seem low, but as he claims to hate board games, and only likes a selected few, this is quite a good statement :D.

At a first glance you might just think it looks like a simple Tetris style game, but there is much more complexity then that. It’s very easy to learn but offers a little brain burn, because planning to use that special Master Action is crucial. I would say if you can’t use the Master Action on every turn, you are probably not optimizing your moves enough. The Master Action let’s you put a piece on all your puzzles/tiles instead of the standard action of just placing 1 piece on one puzzle.

Project L has quite a good replay value as you never use all the puzzles every time, and which puzzles comes out at which time is random. Of course you will learn how to best play to optimize your moves. There are some suggested variants in the game, which I have not yet played, but I appreciate the possibility to play differently.

The deluxe KS version, which I was not given to review also has a few expansions, which I therefore did not try.

Adds 5-6 players and larger pieces and bigger puzzles to complete.

A new expansion is coming to Kickstarter.

The game scales really well, but unfortunately I did not get the chance to play more than 2 players, but the thing that would change is more refresh of the puzzles, you can buy, which makes you want to grab the piece you want quickly as there is a very good change of it being gone, when it’s your turn again.

I liked the solo mode, but did not play it enough. You can plan a bit ahead, as you actions determine which piece the dummy player will take and if you can make use of those situations where it won’t get a piece, it might be a good idea – but what do I know, I have not won yet 😀

Very clear rules, simple instructions and nice examples. Only the solo rules I had some doubts about how it worked in the beginning – nice way of making a dummy player.

My only real confusion was that the rulebook already mention the expansions, but they are not included in the retail version. I know they are wanting to change this, but had I had the deluxe it seems great that I would only need to fiddle with one rule book.

I like that it doesn’t require too many changes to the original game play, and I can quickly get to playing. The changes involve a different setup – a 3 x 3 grid with a timer over each column with using the level 1 piece. According to a few rules the dummy player will acquire some of these or remove them from the game, and this is also how the game ends. In most turns it will get a puzzle and it will be treated as a fulfilled puzzle.

I played this remotely a few times as a 2 player game, playing more than 3 would require a large setup of cameras. The card management is luckily not hidden and is just played to the table, this helps tremendous when playing remotely, but it does require some space the more players you are. The game is turn based which is essential for playing remotely. I will definitely play this again.

Keep the box at home and just find another smaller container and this game will become quite portable – only issues could be table space where you are going to play it, but if this is no issue I suggest you give it a try.

Absolutely stunning from the first look to the last look. It feels very exclusive – the black cover kept simple with just a large L. The box is nice and thick and closes perfectly. And the goodness doesn’t stop there – a nice and simple insert, which fits everything and a simple and clear rulebook, which does describe the expansions event hough they are only included in the deluxe version.

The black & white “tiles” are nice and thick and has a really nice feel to it, especially on the back – feels good in the hand, too bad it mostly just has to stay on the table. The indention in the tiles perfectly accommodates the nice coloured and thick pieces and it’s a joy to play with.

The only flimsy part are the player aids (which also describes the expansion even though this is the retail version), but luckily it doesn’t ruin the experience and “just has to stay on the table during play” and not needed once you get familiar with the game.

The game even comes with a nice black bag simply to store the coloured pieces, but you have to make a choice if you want to still keep the coloured pieces separated so it’s easy to grab the piece you need or have it just in a big pile, which looks beautiful, but you have to search for that right piece during the game – I usually find 1 example of all pieces to put on display.

The bag isn’t used in game – maybe some variant could be made? 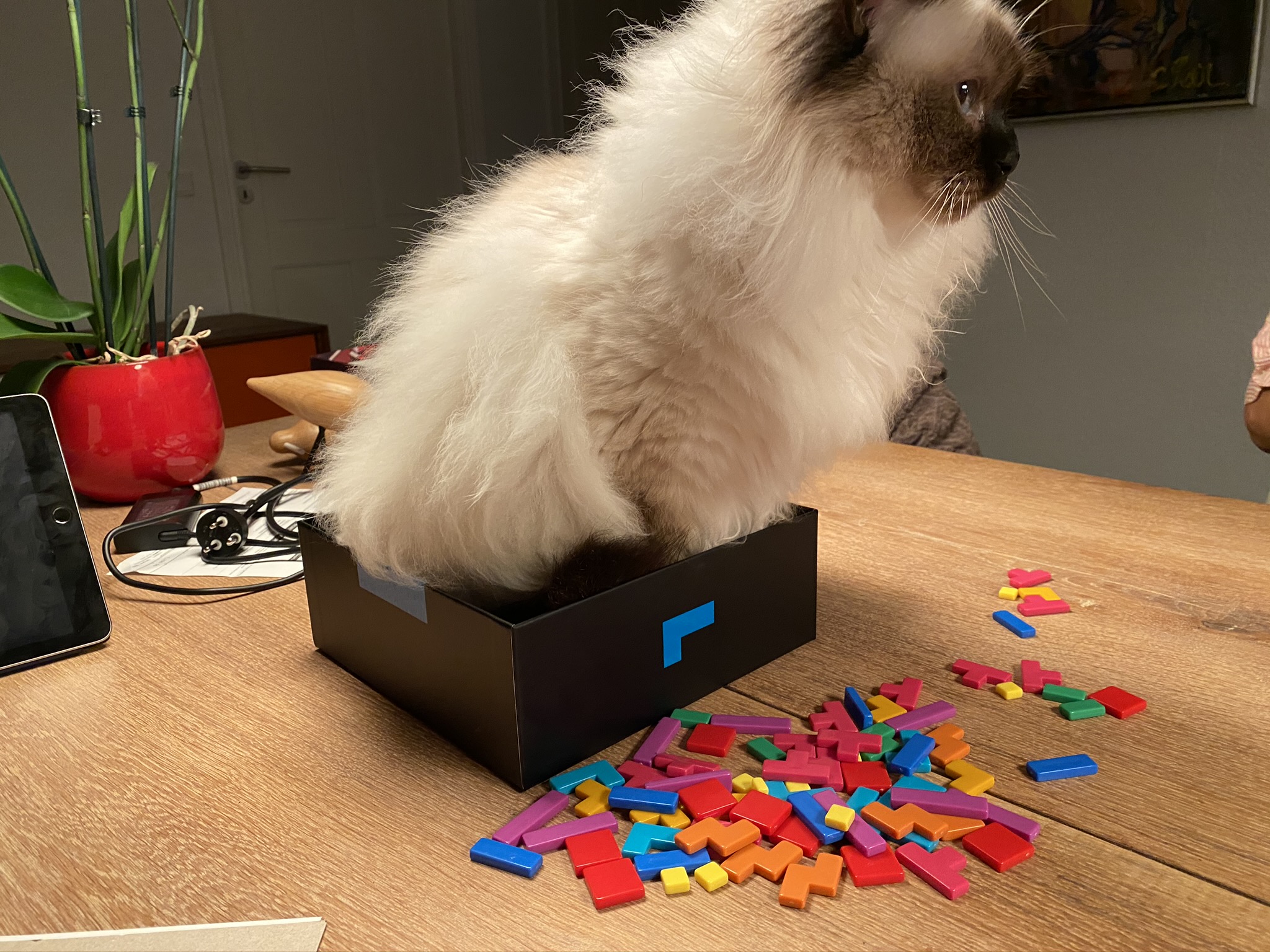 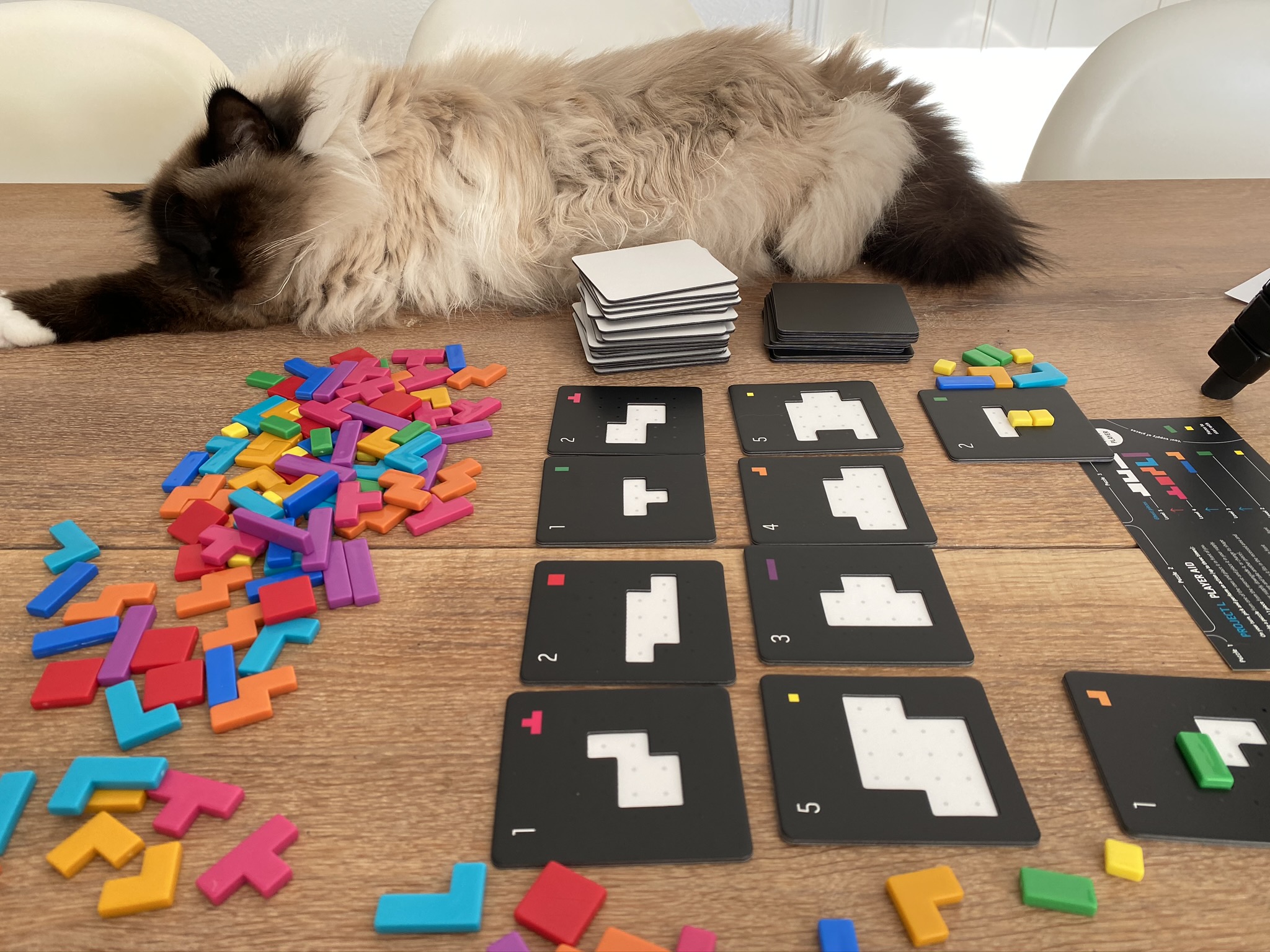 Birger usually doesn't come up, when we are playing, but I was playing remotely and he just came up to relax 🙂 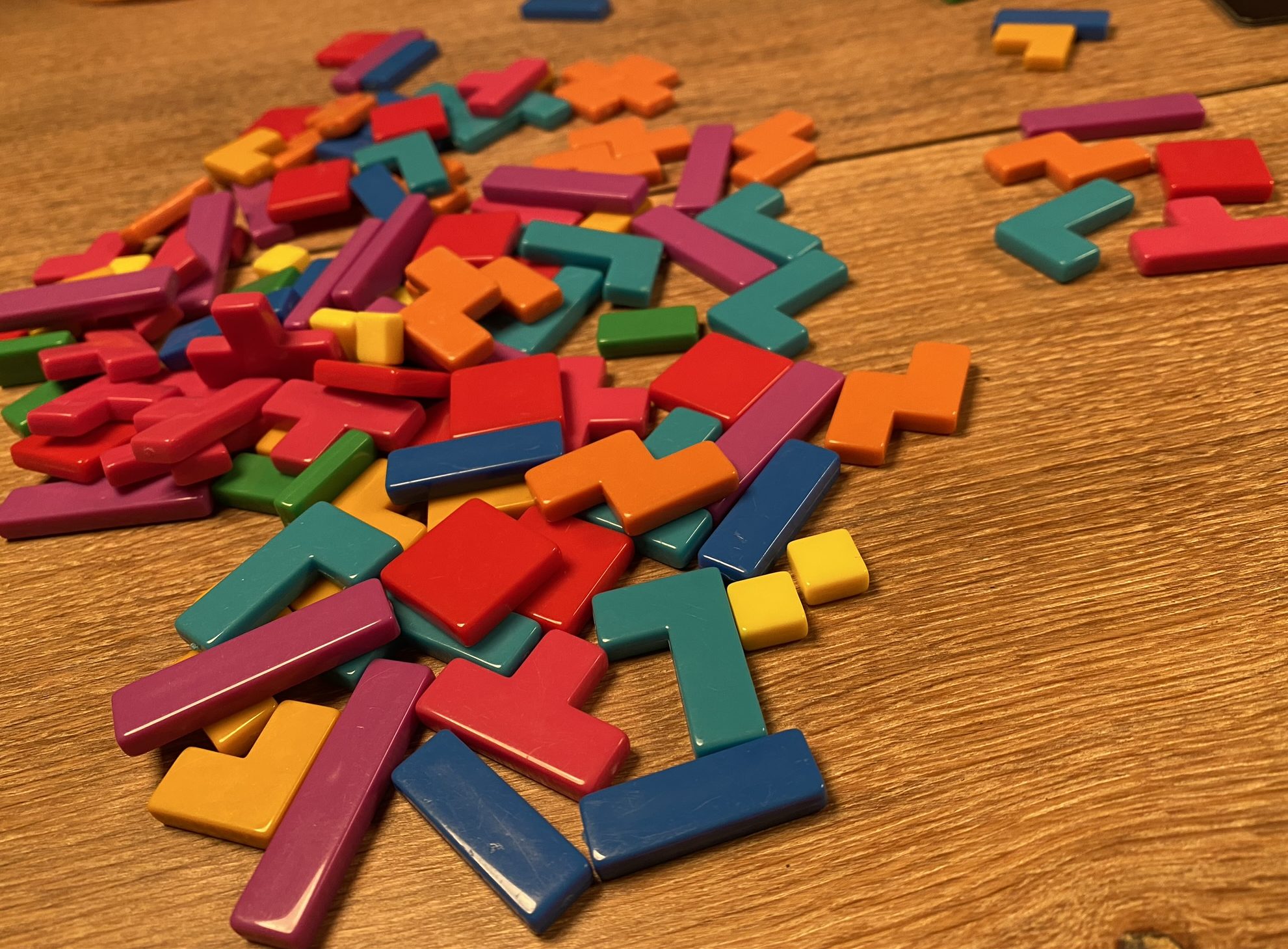 All the lovely acrylic pieces 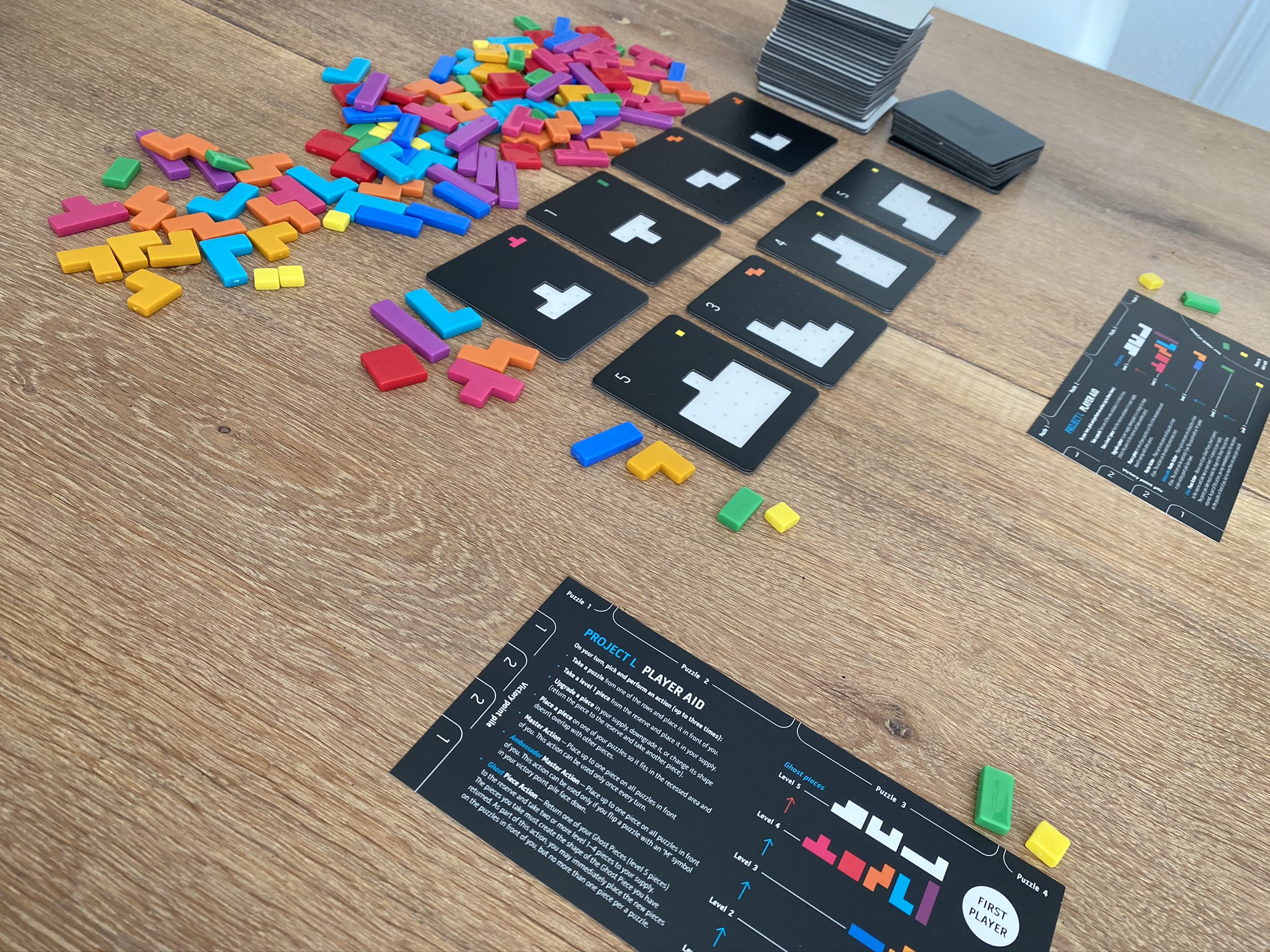 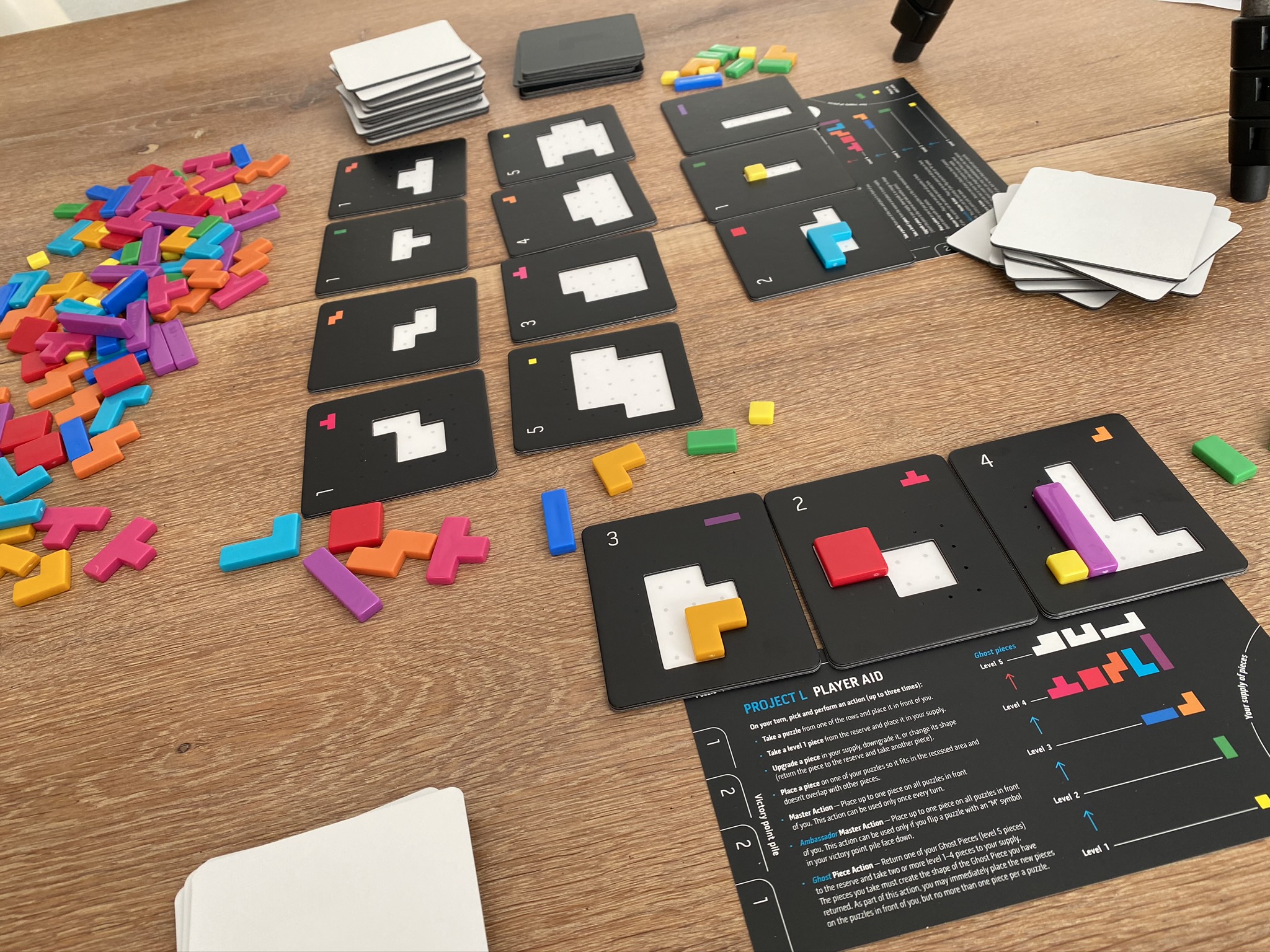 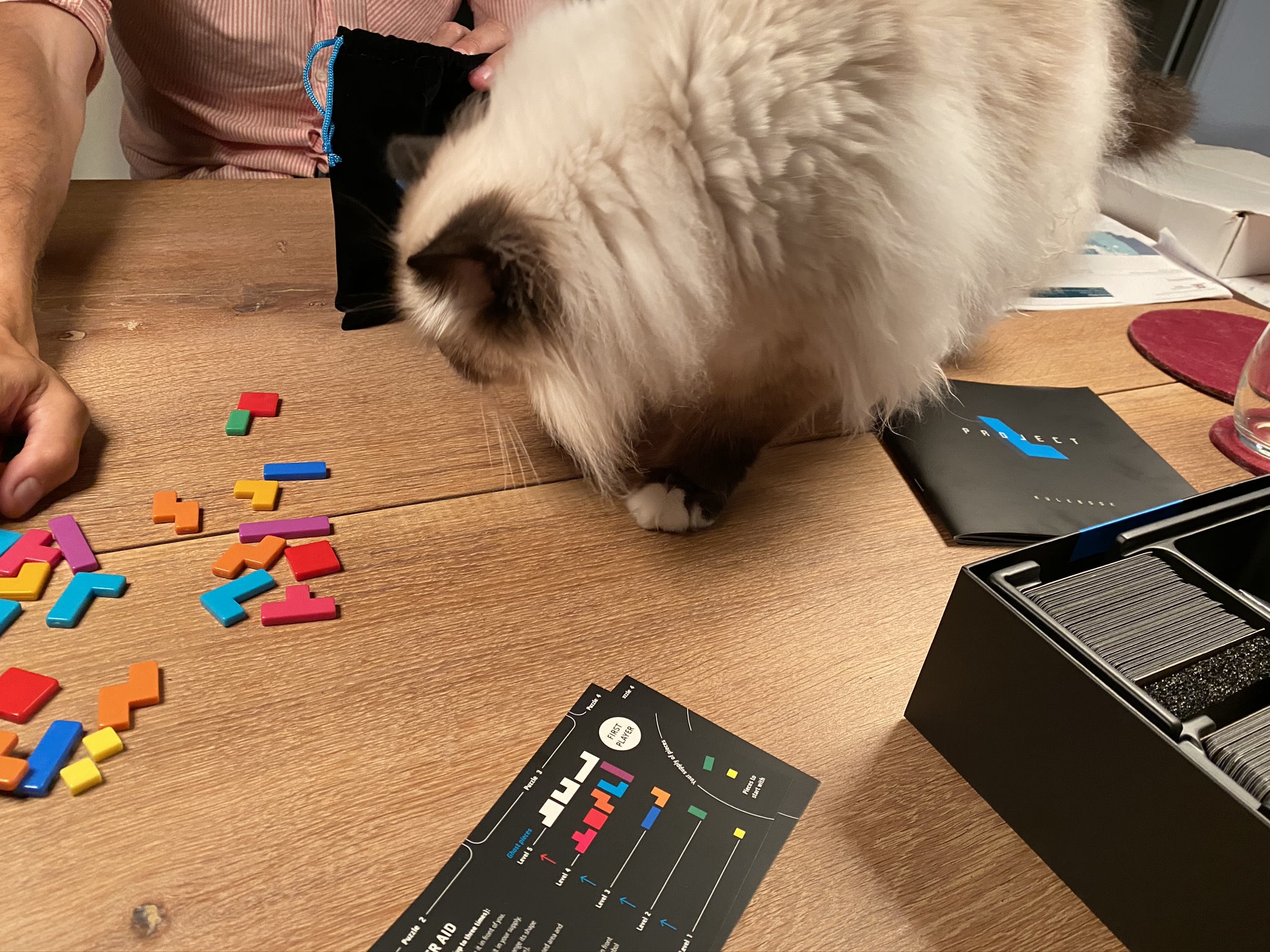 Component testing in the making 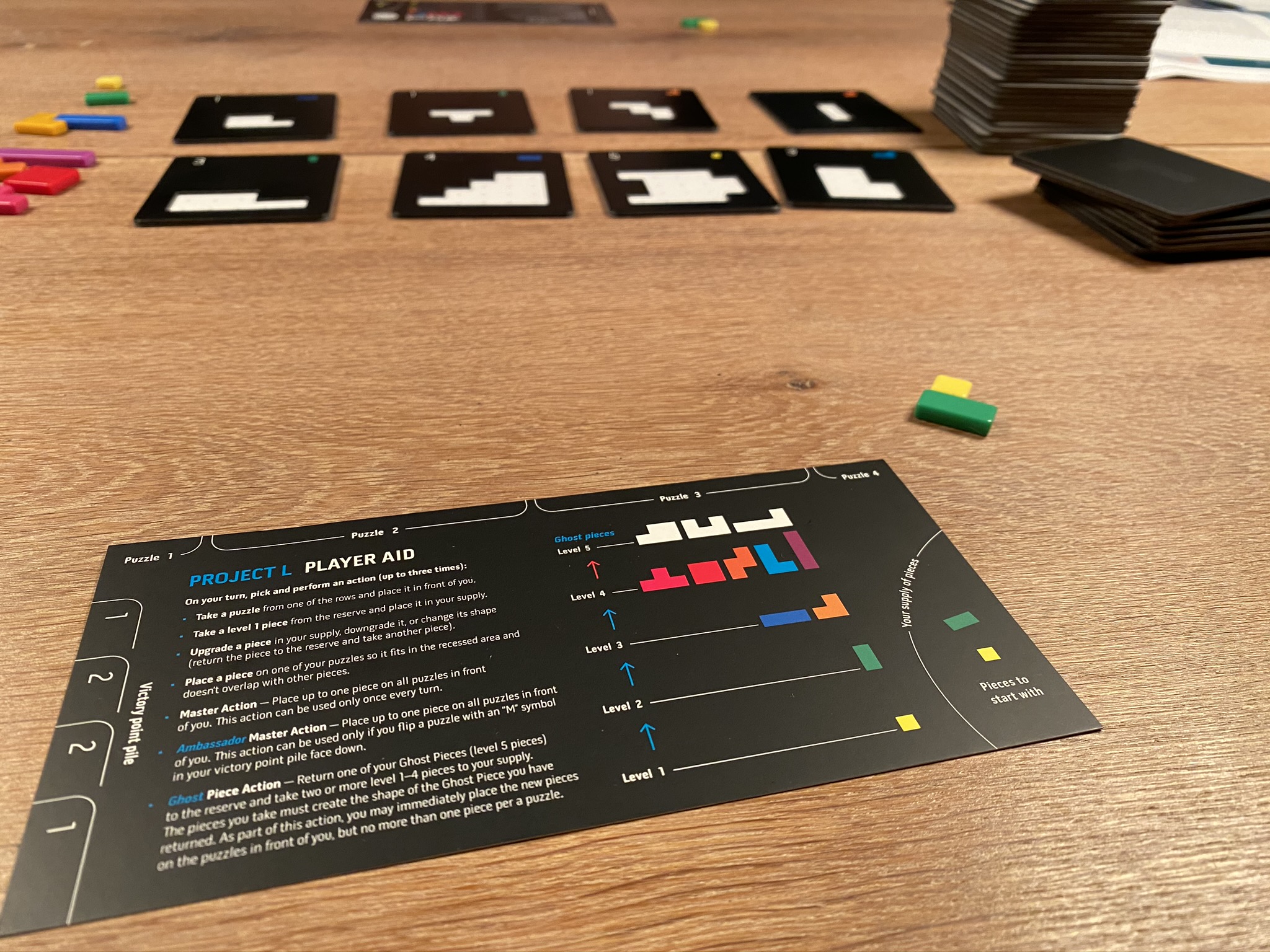 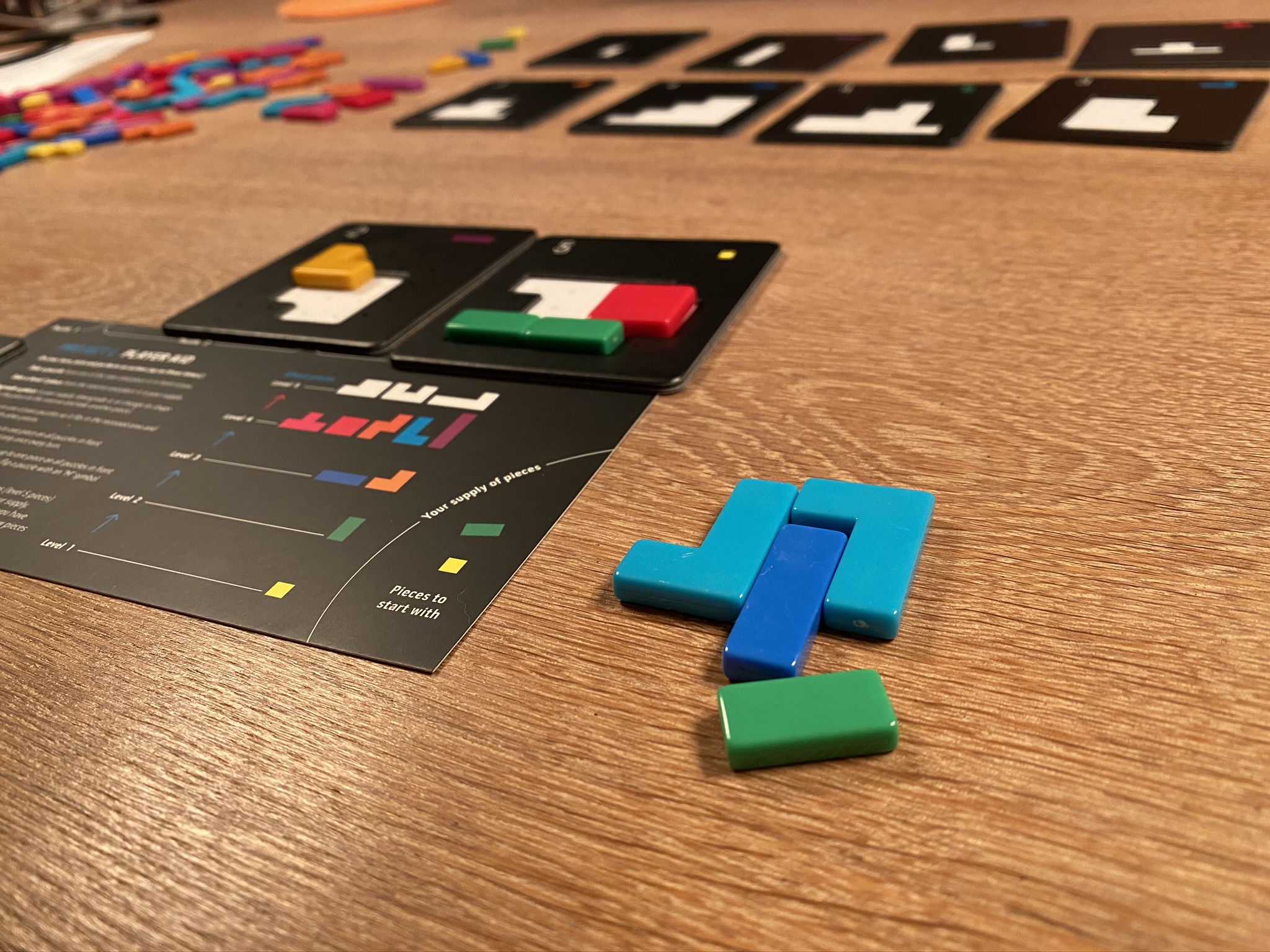 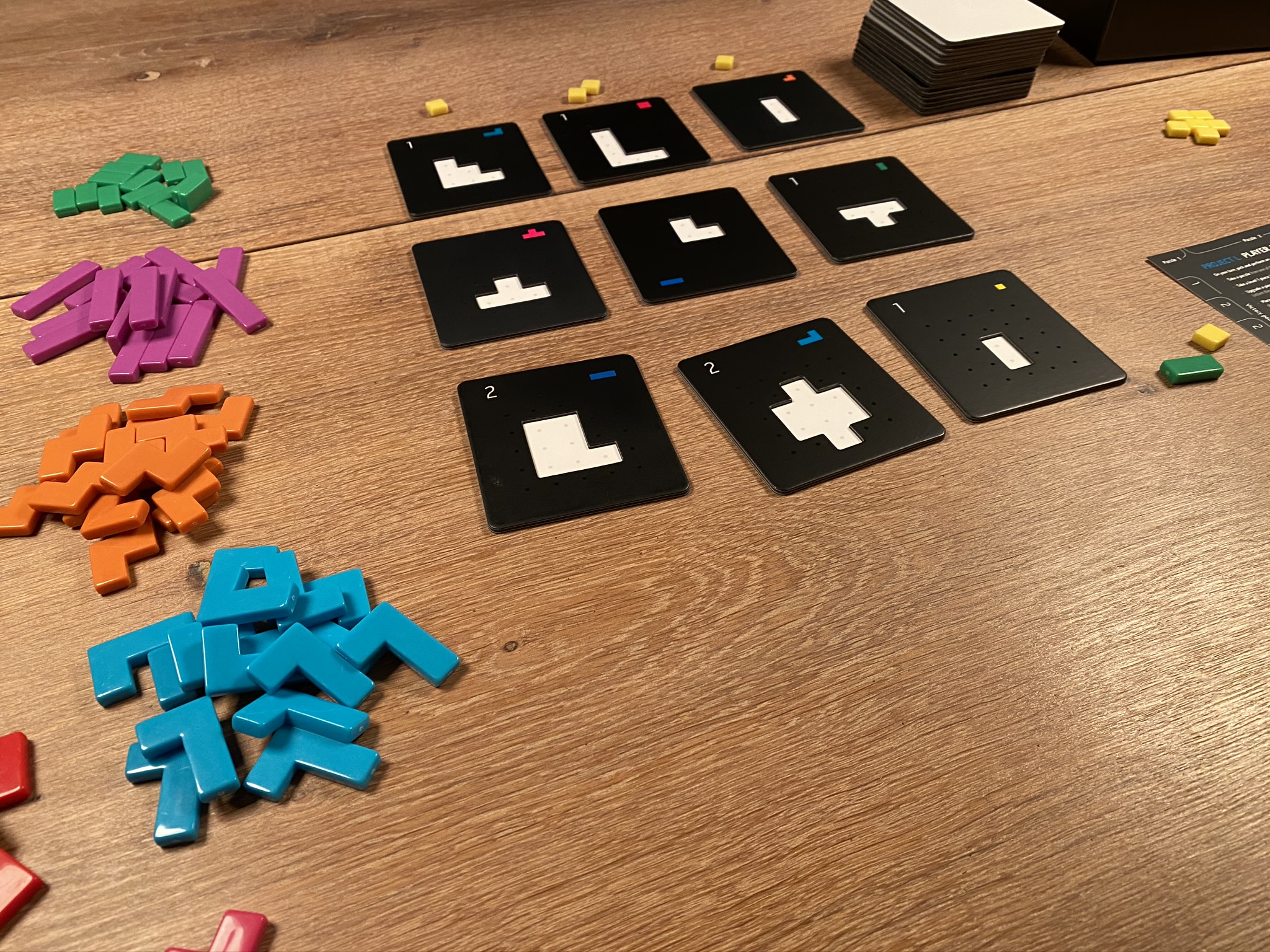 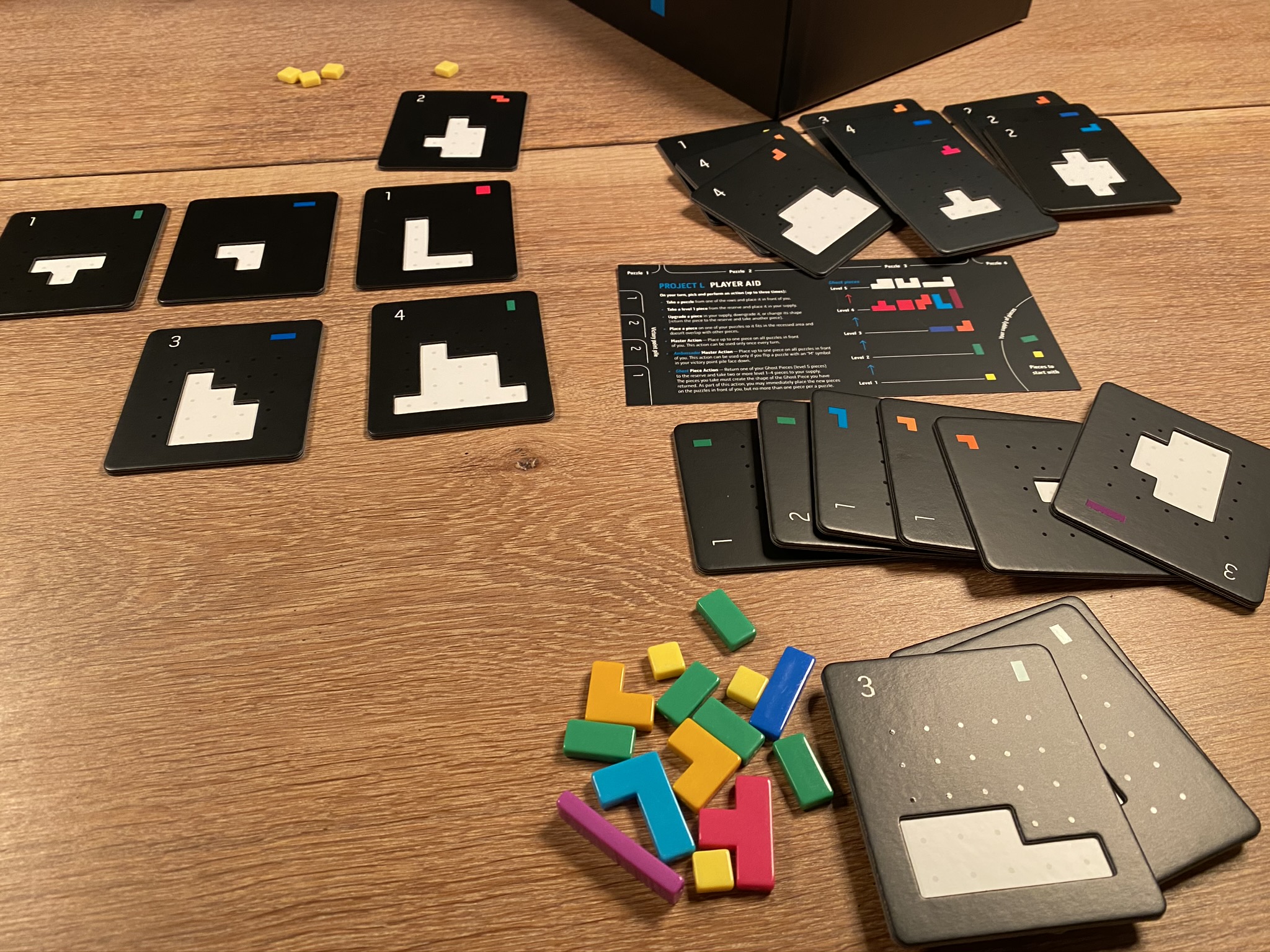 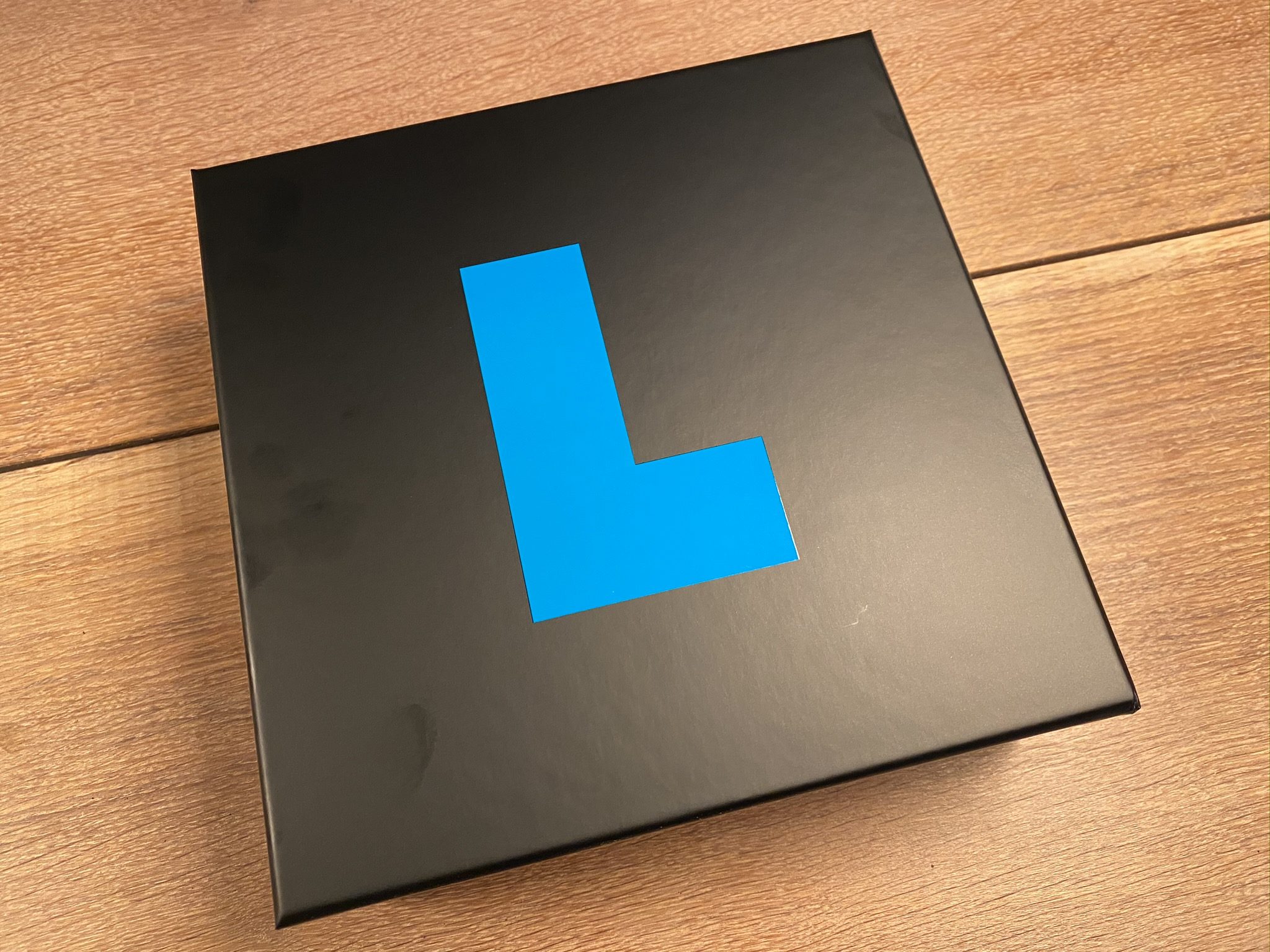 I Birger usually don’t feel drawn to board games like my brother Helge, but these where just too beautiful to not look closer at – hence me looking very dreamy. Helge on the other hand usually has to take a closer look at the box and the components. Pieces everywhere! So much can be messed up for the humans, and the pieces will defiantly make some noise if dropped. And “how do you know this?” you ask, well, how do I indeed :). The box is nice and thick, but a bit too small and square for me. Rectangular shaped boxes are best for a longer nap.