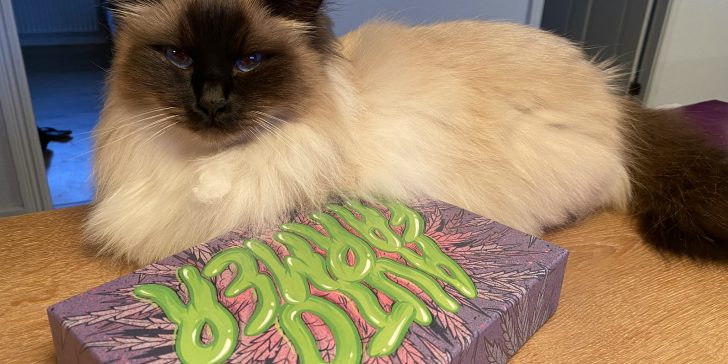 The legal way of growing cannabis – though it’s still not going to be easy as you will get raided or sabotaged.

The game is played over 3 phases (growth, blooming, harvest) and it’s suggested to play 1 game per player – so 2 rounds/games in a 2 player game. Before you can go into the phases, there is an initial seeding phase, where each player rolls 2 dice twice – the higher sum is the amount of seeds you get and the lower sum is how many of these seeds that germinate from the seeds and sprout (grow into plants). If you are lucky to have seeds left, they can be germinated during the game by special cards.

So already from the start you can be of to a bad start having to really try and protect your garden – the worst you can get is 2 seeds grown into plants and no extra for later.

Each plant has the basic potential of 40 grams and it’s your job to at least keep them this way, better yet make the garden grow or the plants better – keep those pests away. The value of these can go both up and down, but mostly down and could even die.

And we are ready for the first phase – but all phases play the same, it only dictates which cards can be played – according to their symbol, some can be played in all phases and some only in a few.

Each player completes their full turn before the next player can continue – going clockwise from the start player.

You start by drawing 3 cards, exchange 0-3 of these cards with new ones if you so desire, but then you have to stick with these. And now for the action and interaction with others part of the game – play all the eligible cards you want. Cards can protect and make your garden grow even better or you can sabotage your opponents and make life just a little worse for them, but it might backfire especially if you are the first player, the others will go after you. After you played the cards you want, you have to check for spread of diseases.

After all 3 phases players count up the scores and play another game – the winner is the one with the highest total score of all the games.

Making a game about cannabis can be a bit controversial, but as it’s just a game it’s easy to imagine it being other plants. I got drawn to this game mostly for the great artwork and interesting new theme – not that I care particular about the theme, but it’s just refreshing to see a new theme.

I really like the nice detail of how most of the cards work true to real life – like how the mites will spread and harvesting your plants before they are ready will give you a lower outcome.

It’s a quick playing game, and you get easily started as most of the information are on the cards themselves so no need to constantly check the rule book and the flow of the game is great. So even if you are really bad at it, it’s soon over. I do feel however that the game shines with more than 2 players.

What I don’t like about the game is the huge amount of luck in the initial seed phase, getting unlucky you could start with only 2 plants, while others could potentially start with 12. I think there should be some minimum of seeds greater than 2, as having just 2 plants would be you have a very hard chance of winning, unless you are very lucky with your cards (in a game with more than 2 players it might be a bit easier to not get targeted every time).

The game doesn’t specify it, but I suggest that the start player for each game rotates so all players get to start.

The rules are very well written and easy to get going, don’t get me wrong, there are still many special cards, you need to handle, but most are clearly written on the cards themselves and very rarely would you need to look for further explanation in the rules.

When you first start the game your initial thought might be that it’s easy, but time runs out quickly and you have to evaluate your moves – do you focus on growing your plants or do you try to sabotage your opponents.

The game isn’t too complex and this makes the game flow really well and fast-paced. I would say this is light-weighted as there doesn’t seem to be any though decisions to be made (maybe only who to play a card on and when).

There is some luck involved especially in the beginning where you seed and plant your garden – it’s based on 2 dice rolls and dictates how many seeds you get and how many have already grown into plants.

There is not same number of each cards, most have 8 and some only a few copies, but the deck consists almost 50-50 of bad and good cards.

Each card can only be played in the phases that are listed as symbol on it – not every card can be played in all phases. This also gives it a little bit of strategic edge to the game, as you might want to keep some cards for later rather than playing all in the beginning, but as you only get 3 new cards each phase, you have to manage your cards wisely.

I think the replay is fairly OK – your initial setup of cannabis plants varies from game to game and also the randomness of the cards. It seems there are almost too many of each card as sometimes you just get a hand of the same cards, and although you can redraw once, you only have 3 cards – but this redraw rule is crucial.

It would be great with even more diversity in the cards, I’m not sure what they should do, but it’s always fun to get new cards as you mostly see the same cards. Some cards were so rare we didn’t see them in the game (playing 2 games for a 2 player game). Maybe 8 of most of the cards are a little too much when playing 2 players.

I did not try this expansion yet, but it seems promising as it contains different plants than just the basic plants and can change a little of the bad luck with the initial setup. Plants are either more valuable, feminized (cannot be attacked with male), auto-flowering (or auto harvested after blooming phase), long-flowering (cannot be harvested early) and disease-resistant plants.

I’ve only played it 2 players, and it works, but it can feel a bit samey and you are always the target. With many games like this I feel it shines with more players – there is the other strategic element of which opponent to sabotage and maybe you can even make small alliances whereas in a 2 player game there are no choice (well to attack or not).

I do like the fact that the game length varies according to the number of players – 1 round (with 3 phases) per player is played.

The rule book is very clearly written and illustrated and nice examples. There is an index with the cards included, but it doesn’t offer much more information than the cards themselves, but I guess it’s nice to have one place to look up the possible cards in the game. This of course makes the rule book seem longer.

The rules are simple and makes the game flow quickly and it’s quick to get started.

The game doesn’t come with a solo mode, and I can understand why, it would have to be a smart AI in order to really feel like you are being challenged, but I would definitely try it if someone made one.

As there is quite some card management involved (it’s a card game :)) it’s always tricky doing this remotely, but keeping it 2 player it’s certainly possible and I have played other games remotely that where similar.

As it’s a card game, it’s by definition very portable. All cards are the same size and could be easily traveled with. I have not measured the size, but it seems like a very standard size, so a more portable container should be able to hold these.

The box itself it rather big, but it also contains a small expansion, some point card tokens and 2 dice.

I know the artwork might not be for everyone, but I really like it, it feels unique for me and though some of the drawings can look scary, they are funny, very detailed and well drawn. Like with the mites, I can just imagine that this is what they look like in my real garden – and that I want to do everything I can so try and fight these pesky monsters (it seems easier than in real life).

Although this is a prototype (it was published in Czech Republic and now going to Kickstarter for an English version) with different card stocks the quality is really nice – thicker cards would make it even better.

The point card tokens are a bit more rough in it, and the sharp edges ruin the smoothness of the rest of the cards, but it’s usable and might change in the new campaign. 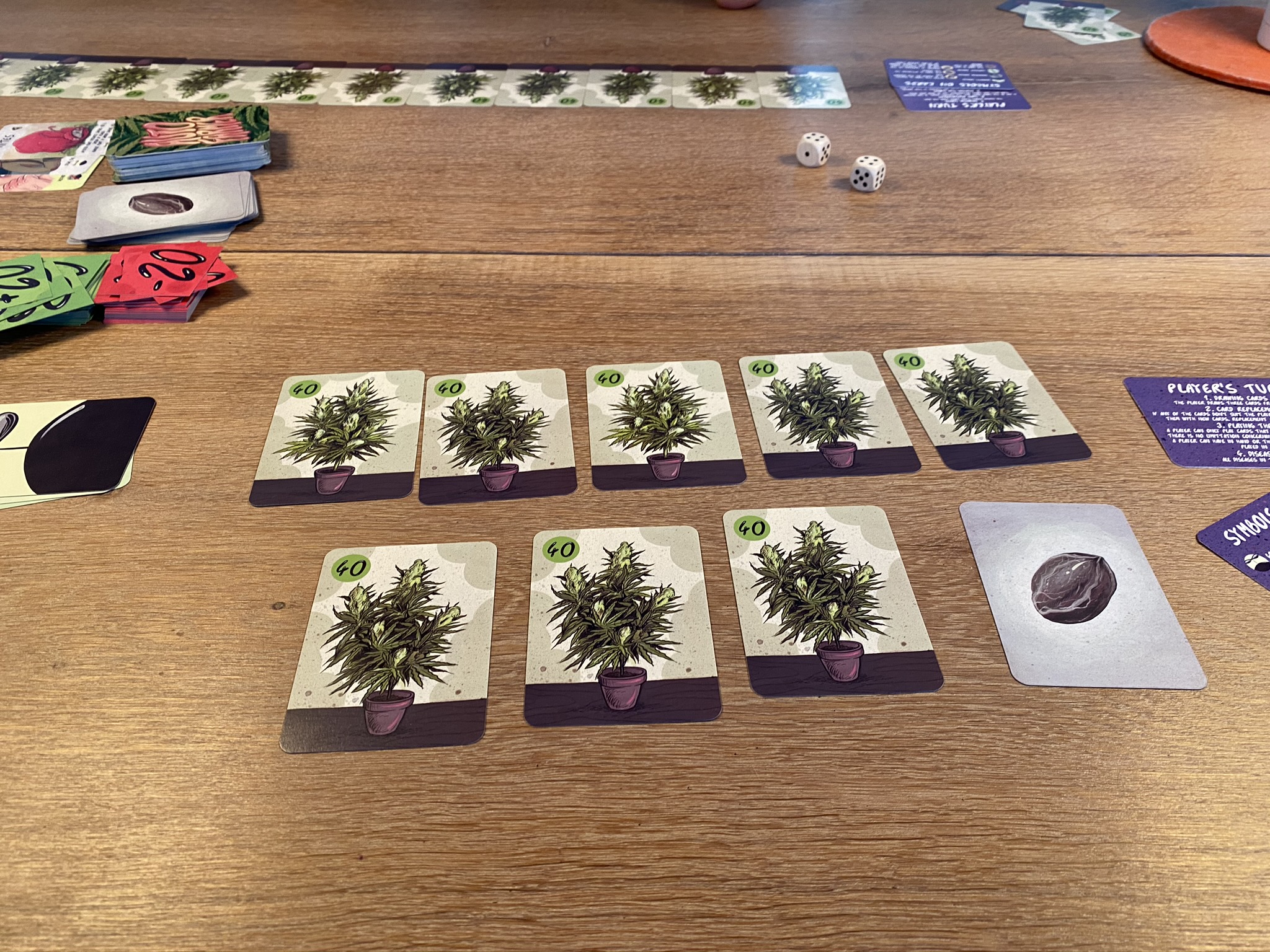 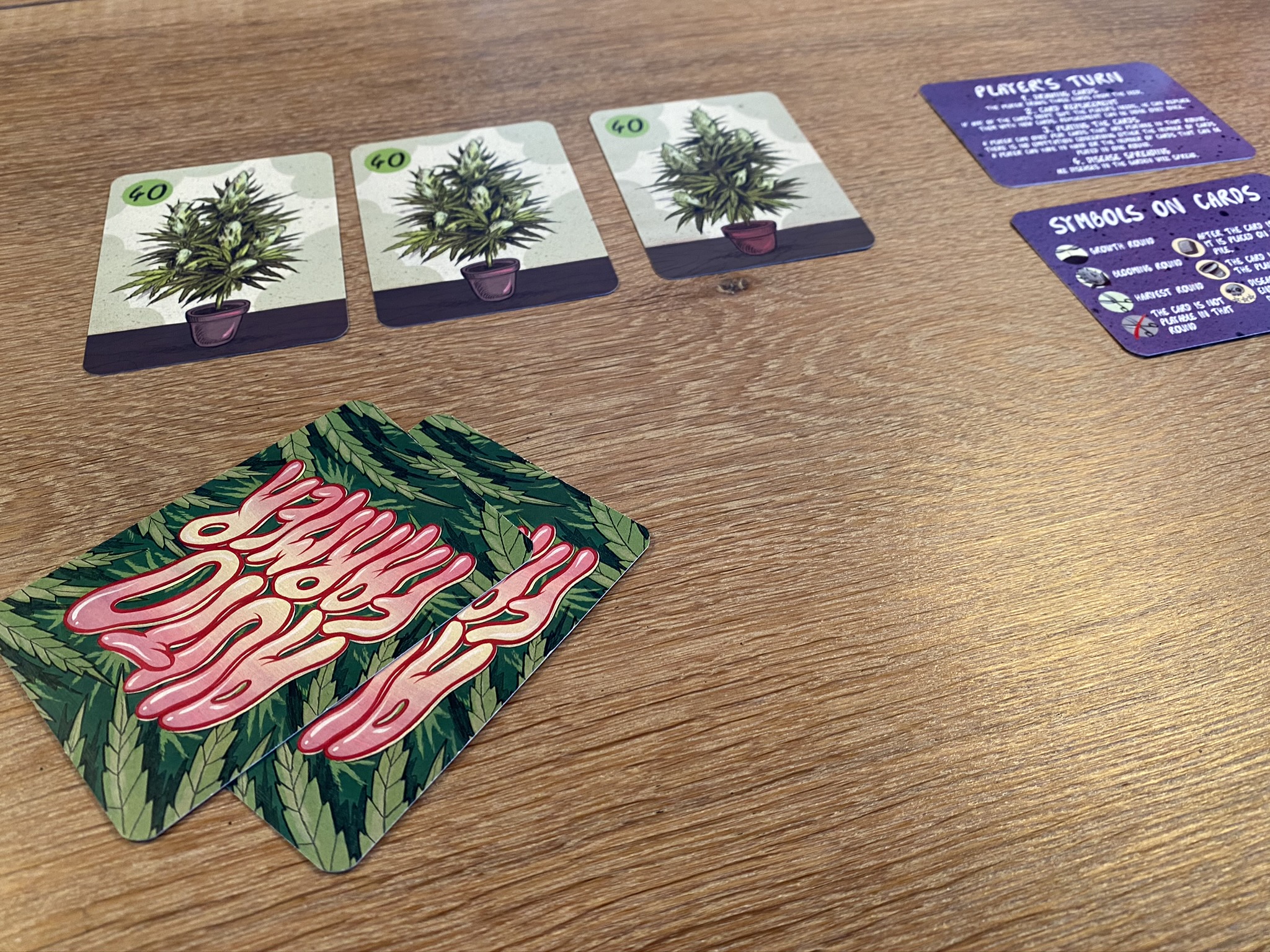 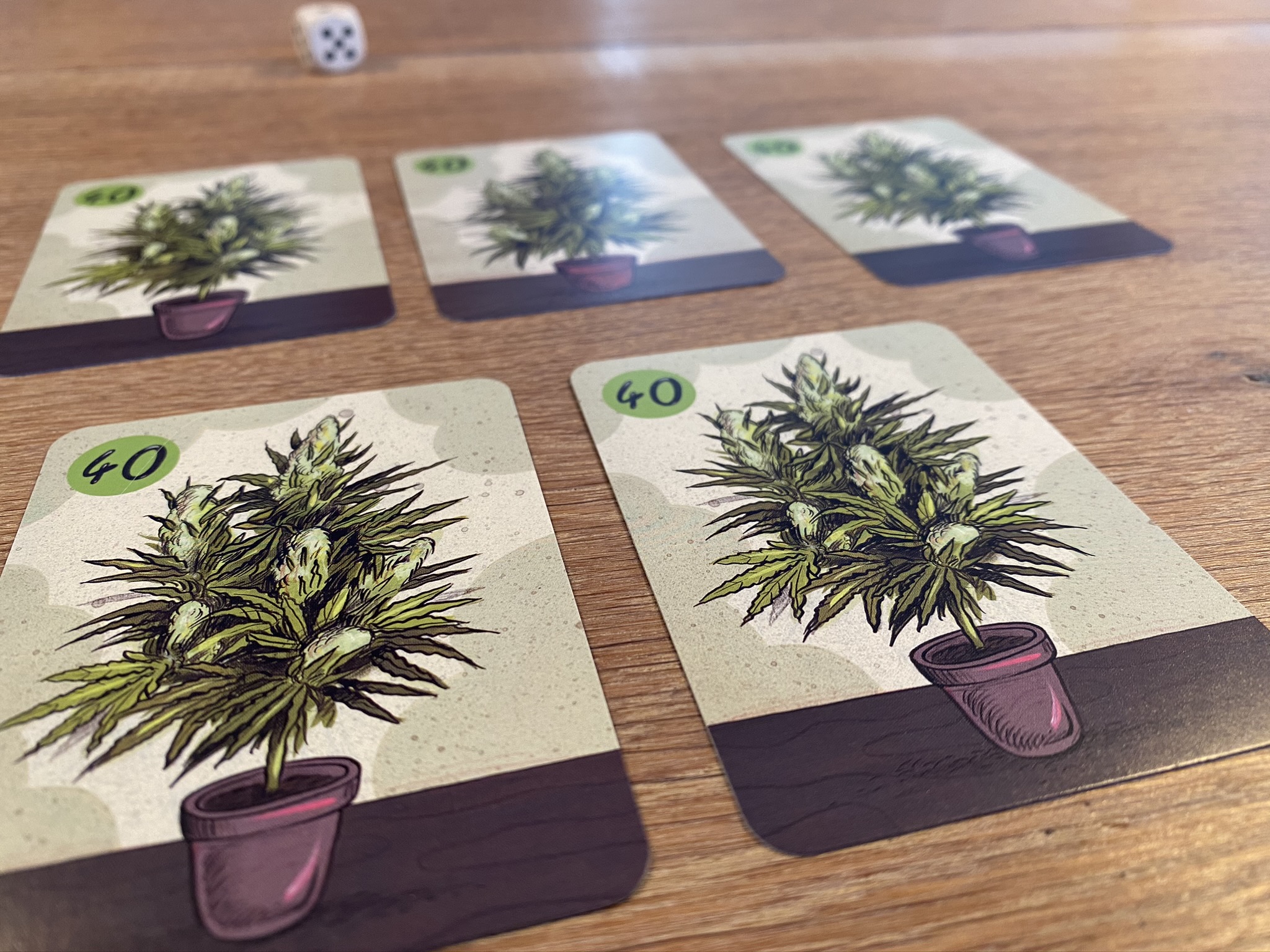 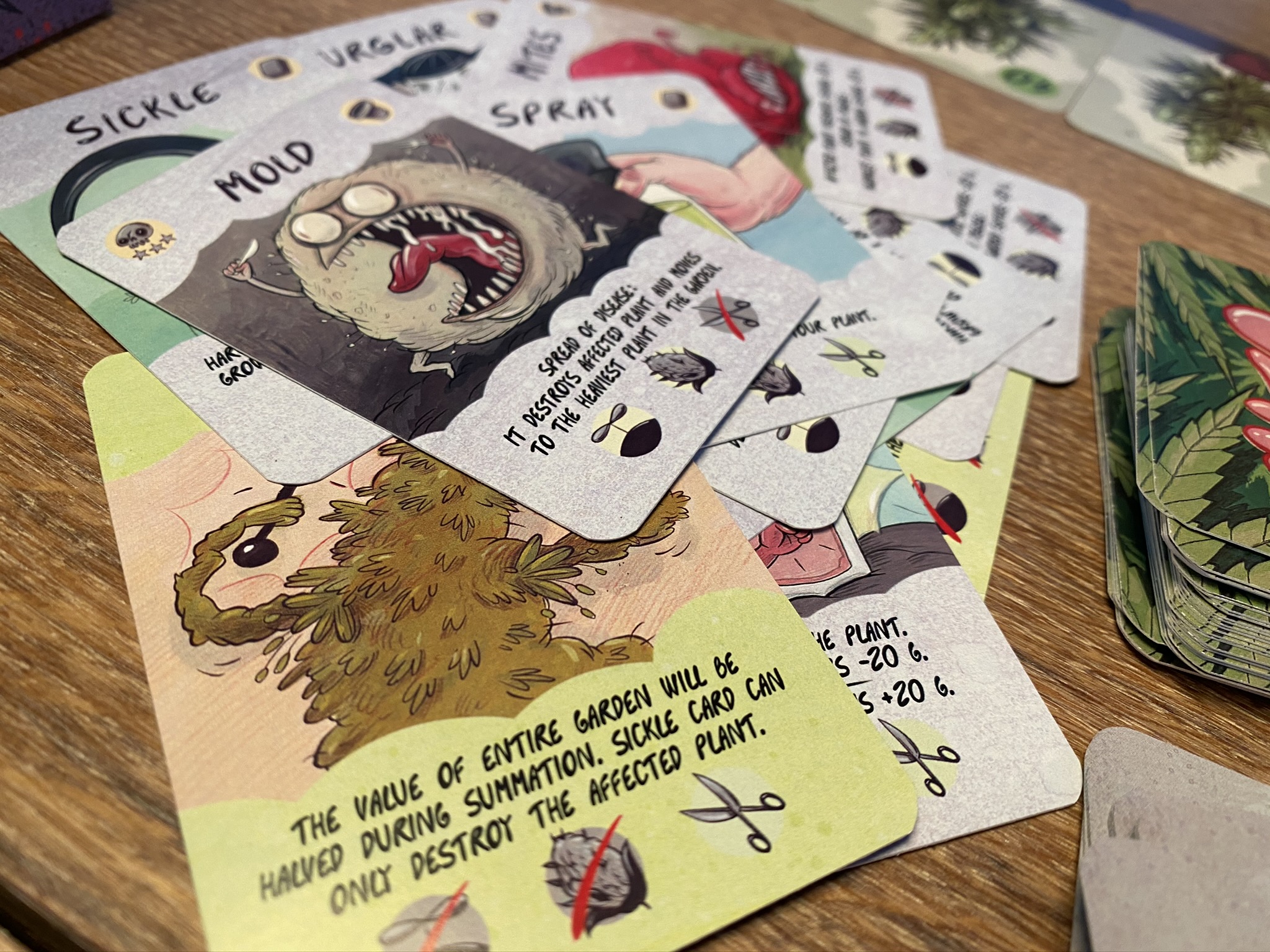 Look at those cards - you don't want to get a mold 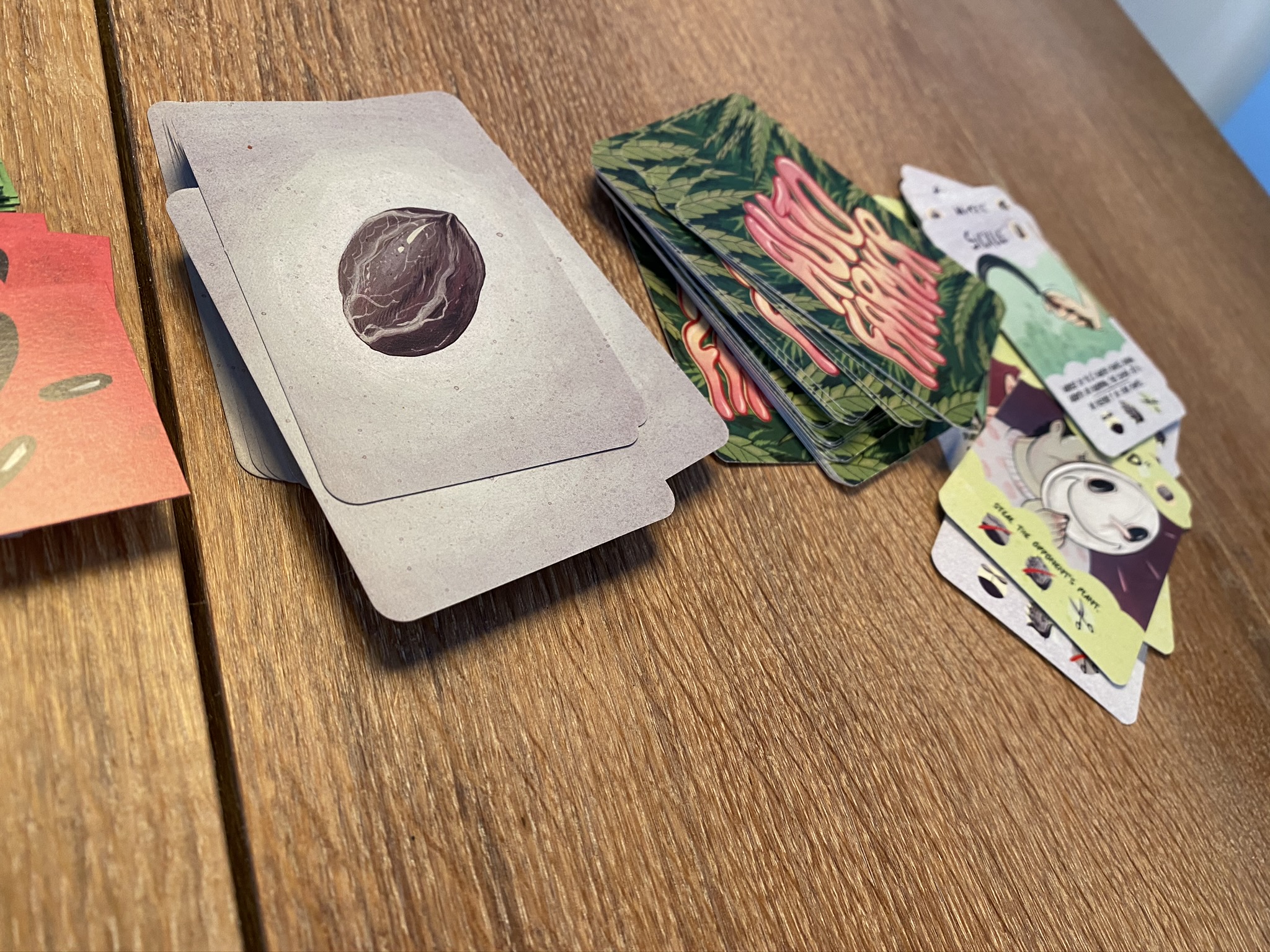 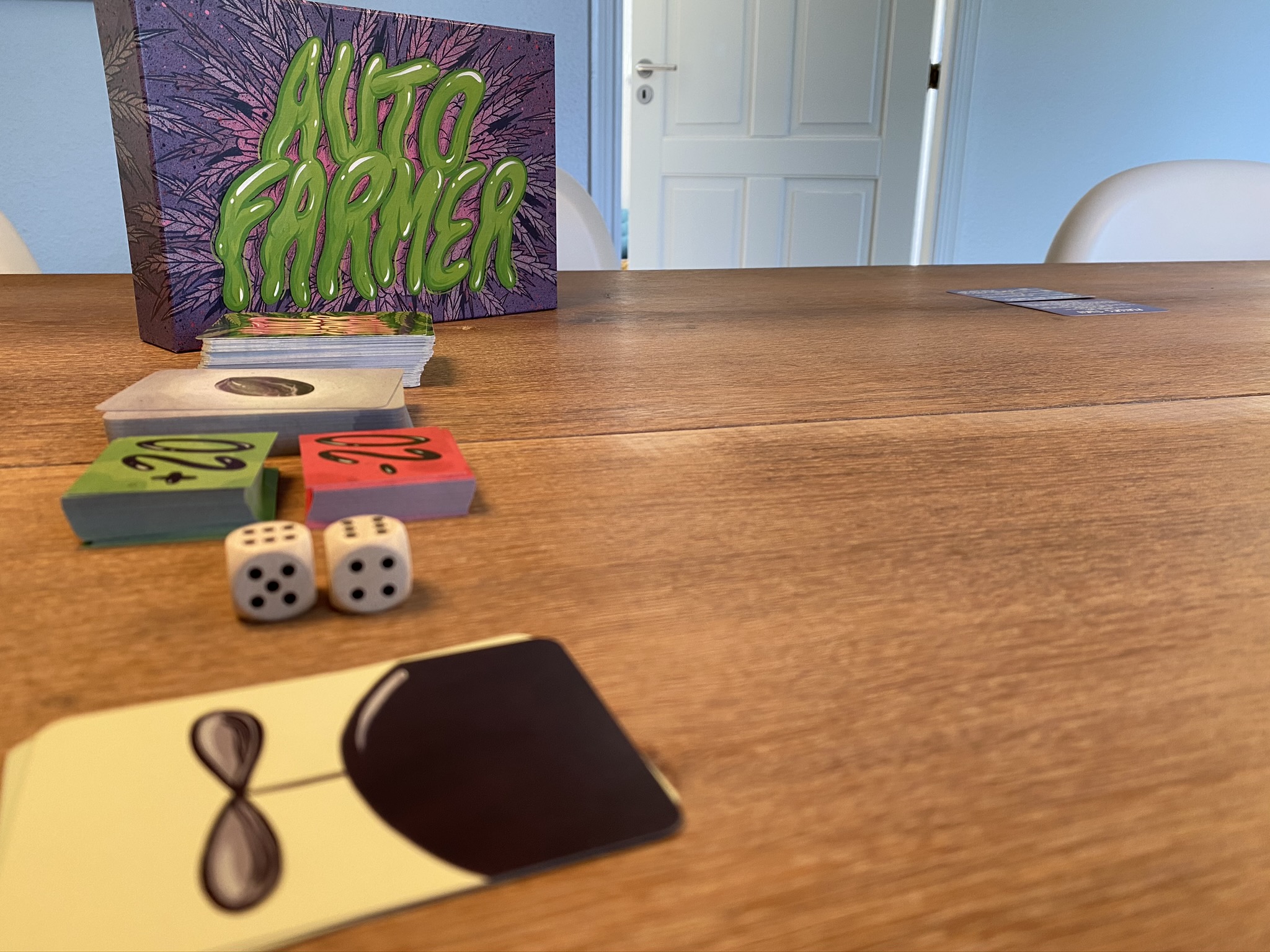 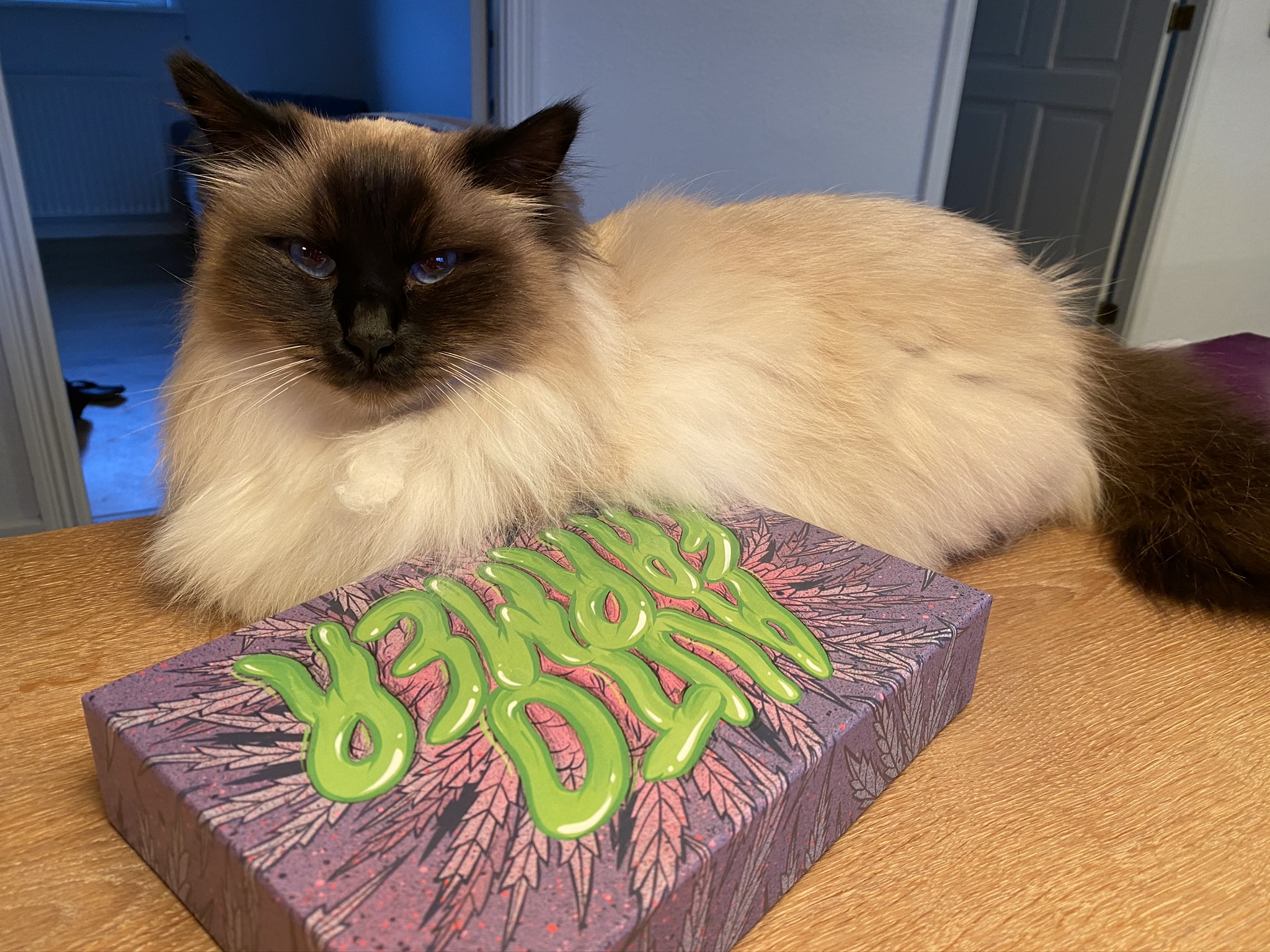 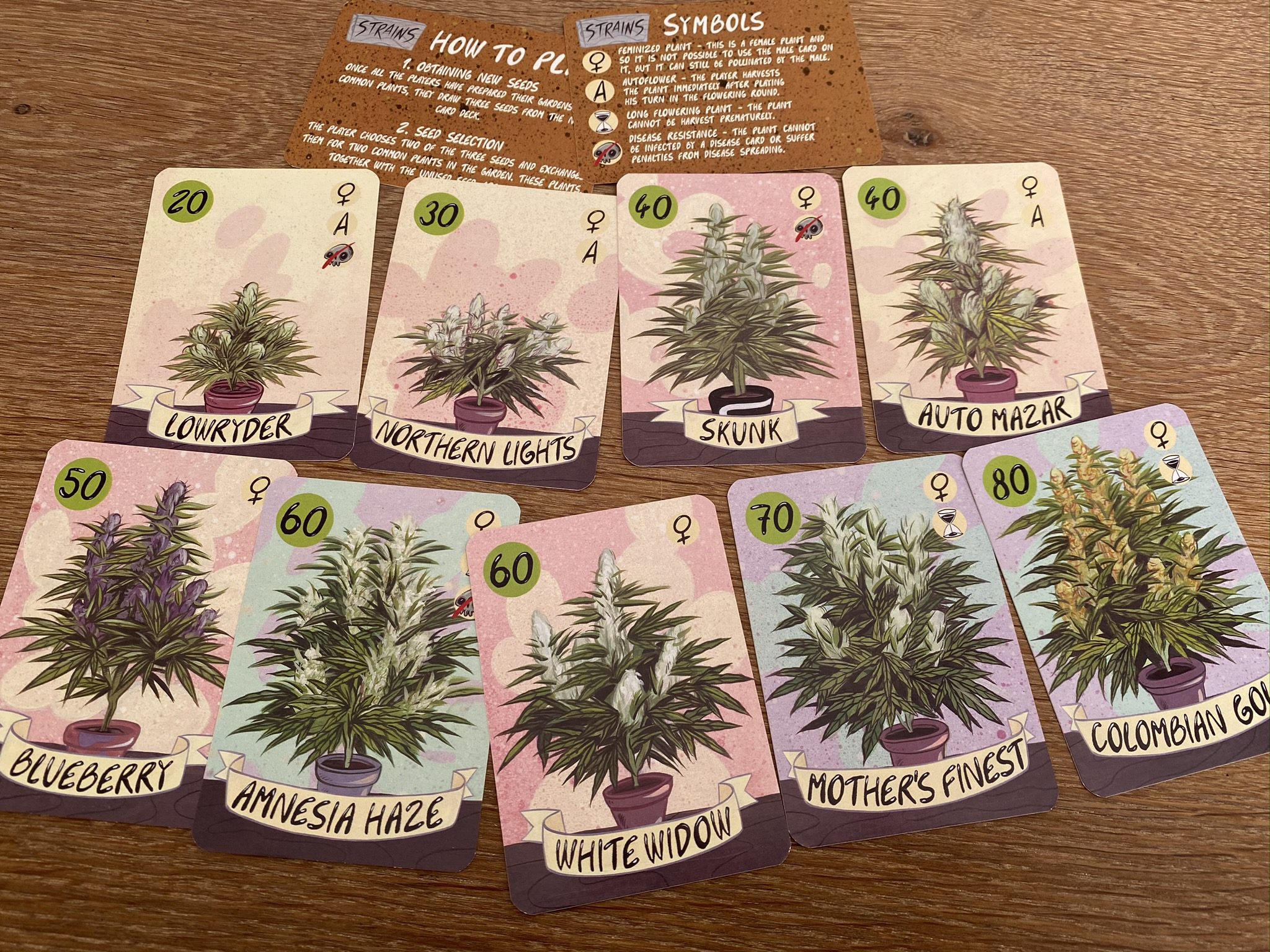 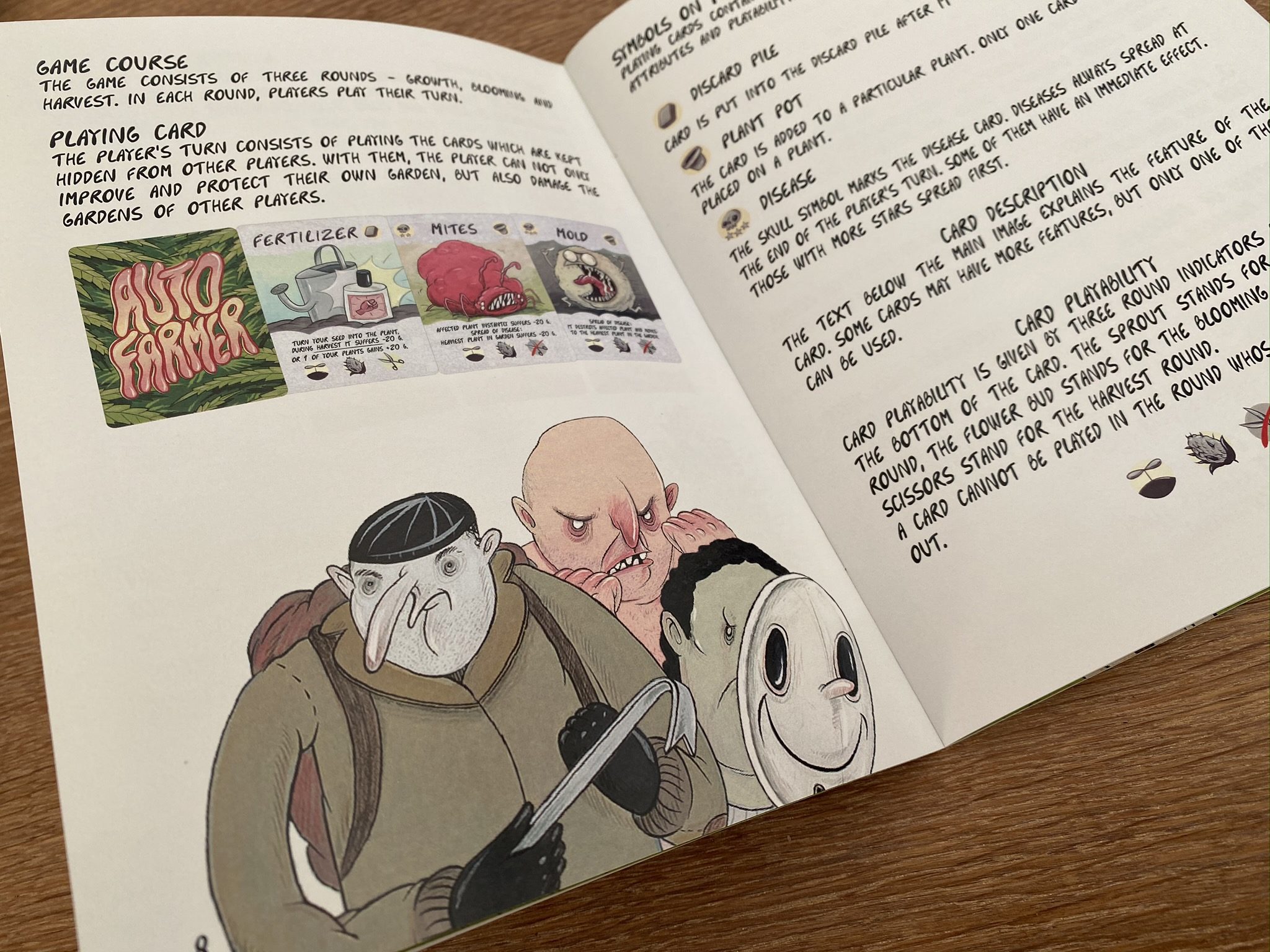 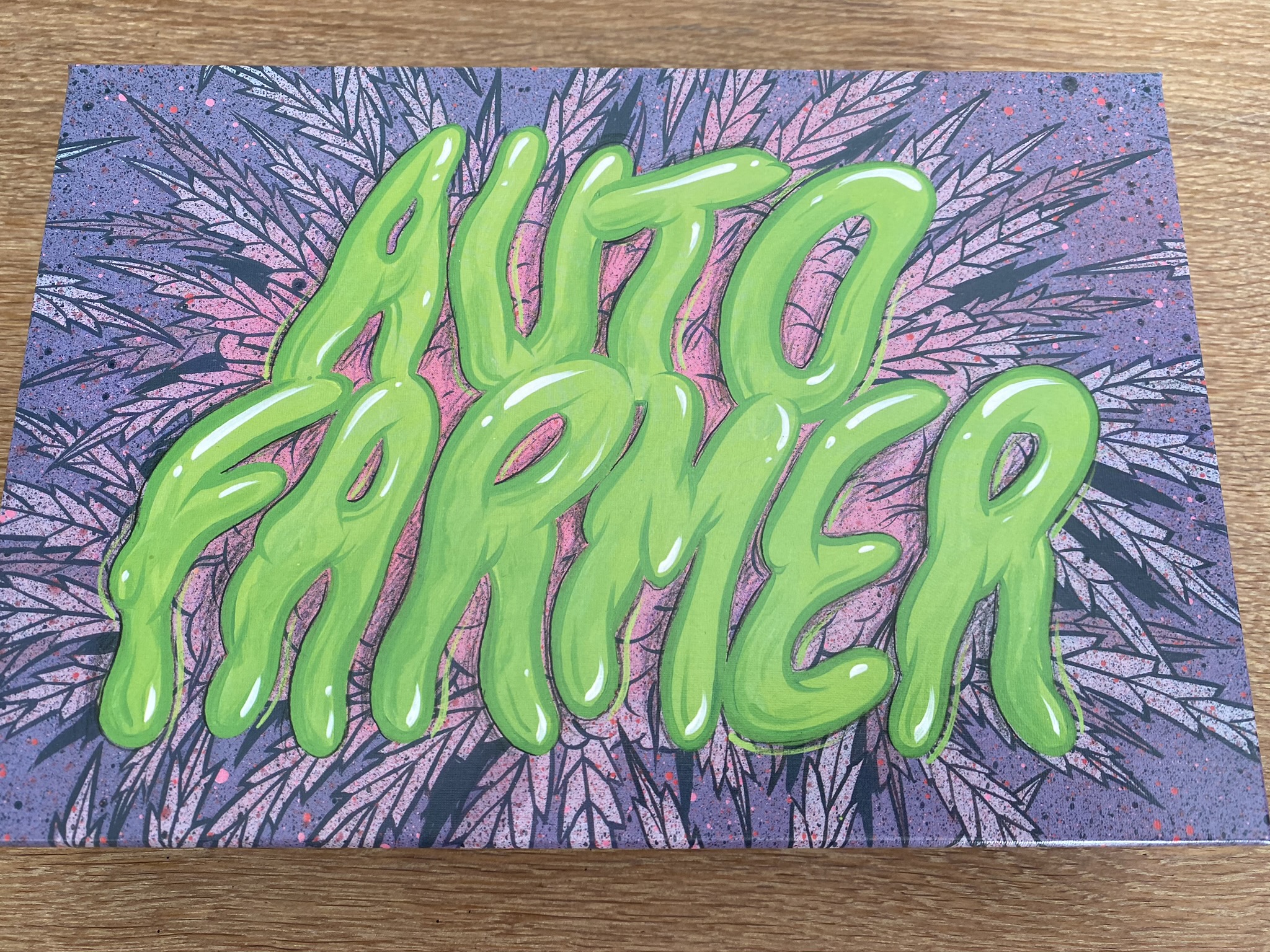 Usually I (Birger) doesn’t take so much interest in board games as my brother Helge, but this box intrigued me, and I think it matches my fur and eyes quite nicely, so a big paw up from me. Helge  will be more involved in the rest of review and I’ll go back to something else.

As it’s a card game, it doesn’t have that many different components, but as many of the cards stay on the table during play, there is always the “accidentally” flick of a tail that will make the humans start all over. If this doesn’t work I’ll have to use my paws on the cards.

There are dice involved but unfortunately it’s only used once in the start of the game, so the humans wouldn’t care less if I played with them.

The box as Birger said is quite nice, not the thickest quality but definitely not just paper thin. It also has a good size (bigger than most card games, yes I know many card games comes in an insanely big box for just a set of cards), but mostly for at short stay and just to prove I can fit in it.