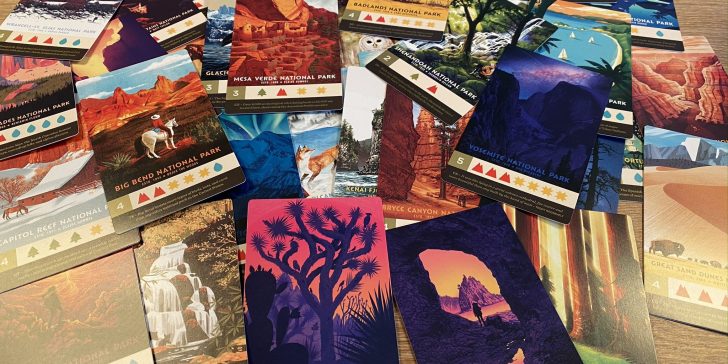 That quiet feeling of hiking in nature far away from the bustling noise of the city is what you can get back when playing PARKS. But it’s not all peace and quiet, it’s a cutthroat path to be the first and best hiker.

Each player sets out as teams of 2 hikers on the trail, which gets longer each season; adding a new adventure/sight to encounter. Equipped with only a camp fire, a canteen and maybe your park license or a camera, you have a long hike ahead of you, lasting all 4 seasons.

Each season a new weather event occurs, adding new tokens to the trail (either it’s raining or the sun is shining) and some special effects during that season, like getting extra tokens og being able to visit parks cheaper.

You can walk as fast as you like and as slow as you like. However, you need some resources in order to visit a park (buying a card), but the last hiker alone on the hike has to immediately complete their hike and only take the park actions on the trail end.

I was actually very sceptical after I had received it from Kickstarter, well it looks good graphic wise, but seemed a little too simple, and playing solo didn’t convince me (also it was my first game). After a long period I decided to try it multiplayer and instantly fell in love. I introduced it to my boyfriend, as we both used to do a lot of hiking together, and really enjoy nature, and he really liked it and wanted to play again later the same day, this has never happened before. I have since played it solo again, and enjoy it a bit more, although it still is best multiplayer.
This might be the new favorite game to play with the boyfriend and I, because it doesn’t take too long and simple game play, but harder to win.

Don’t judge a book by it’s cover really comes to mind here. It looks like a simple game but it has so much more depth than you think – it’s not just pretty pictures. The strategy comes in the form of how quickly you want to end your hike (and thereby forcing your opponents to move a bit faster) and which spots/tiles to go on, collecting resources and possibly activating other actions. I like the fact that if you can’t perform and action (only a few spots this matter for) you are not allowed to go there and just block. When that special tile with the “additional park action” comes out things go crazy to exploit this as much as possible and together with the “copy a tile with a hiker” it’s and explosive combo, especially if it comes in the first season.

Do you reserve a park to be sure no one will take it from you before you can afford to visit it, or do you take your changes?

Should you spend your park action to buy some gear to help you either visit/buy the parks cheaper or help you be more flexible with the resources you get or the actions you can take. You could also be lucky to get one of the rare canteens that lets you either turn a resource into a wild resource or reserve a park (outside of the end tail park action).

And when should you use you nice camp fire to take an action, where someone is already standing; it seems to be wise to use before one of your hikers reach the end of the trail, as you get to restore the camp fire when this happens. This seems to be more used with more players though.

There seems to be a good amount of replay value here. There are so many different cards and a huge stack of gear cards, some season cards, canteen cards and year cards to last for quite a few games, so you still feel you are playing a different game. What helps also is the randomizing of the tiles for the hike and the different season’s weather and the event, but these tiles are maybe the first thing that would feel a bit like the same hike. Some new tiles would make it even more amazing. I know they are working on a new expansion, so this will be interesting.

This will be released in 2020 (kickstarter again) and should feature new Park Cards with rewards, new Year Cards and Bonus Scoring opportunities, and a new way to experience the trail with a new Camping mechanic. I’m intrigued and looking forward to getting more information about this.

The game can be played from 1 to 5 players and works really well on all player counts, with the solo mode being the weakest but still enjoyable. It’s much more intense playing 2 players, and you don’t want to rush to end your hike with both of your hikers, with the other player still having both of theirs, as they can just do all the actions they want after you finished, of course only until one of their hiker also reach the end.

Playing 4-5 players the trail starts with one extra spot – the trail is a bit longer, but it’s still tight, and you are more prone to use your camp fire when playing more than 3 players as many spots will quickly be blocked otherwise. Reserving parks is also more critical with more players. I like it with player counts 2-5.

The rules are very simple and nicely illustrated with examples for the multiplayer game. For the solo there were a few more rules, which I need to check when playing – I will get used to it soon. We got started pretty quickly with playing and it’s easy to teach and people quickly understands what to do, even non-gamers. Some of the actions/steps seems logical, which makes it quicker to grasp.

Setup takes a bit longer than wanted, but once you have played it a few times, it goes smoothly and the insert and trays help make setup faster.

Some special event cards are used in regards to the solo play; it’s not a complete AI, and only acts when it has collected 3 of either sun or water. It’s a nice way to try and simulate other hikers, and it has some mean events, if you let them get too many weather tokens. For me it seems a bit too easy to win, if you just try to get the weather tokens before the AI. It’s a good way to learn the game, but as they don’t do any of the actions on the tiles or pick up other resources from the actions, it seems a bit too easy; maybe this could be modified.

I think it should be possible, only problem I could see are the light colors of the hikers, which could make it a bit harder to distinguish. It would require some table space, but not too much. The year cards are hidden information, but could be shown once and written down by the players.  I would really like to try this remotely as the board doesn’t change much regarding space with 5 players than with other player counts.

The game is quite compact, small box with great content. Without the box the content wouldn’t take up much space, so I would recommend it for even traveling by flight, of course not playing on the plane but for later. There is an option to buy a play mat, which might make it even more travel friendly; no risk of edges being bend.

The images are stunning and everything is really well done, good quality, and it’s until now the game from kickstarter with the best quality all around. It’s so zen like that everything has a place in the nice insert, which comes with game. And the 2 trays for tokens can be used during game play, which helps with setup and clean up.

Even the inside has nice graphics – I don’t usually see that in the games I buy, nice touch.

The tokens are great, thick wooden pieces and you get nice, big park cards. The only problem I have with these are they always bend a little, they should be thick enough not to do this, so it’s a bit sad, but it doesn’t ruin the experience. 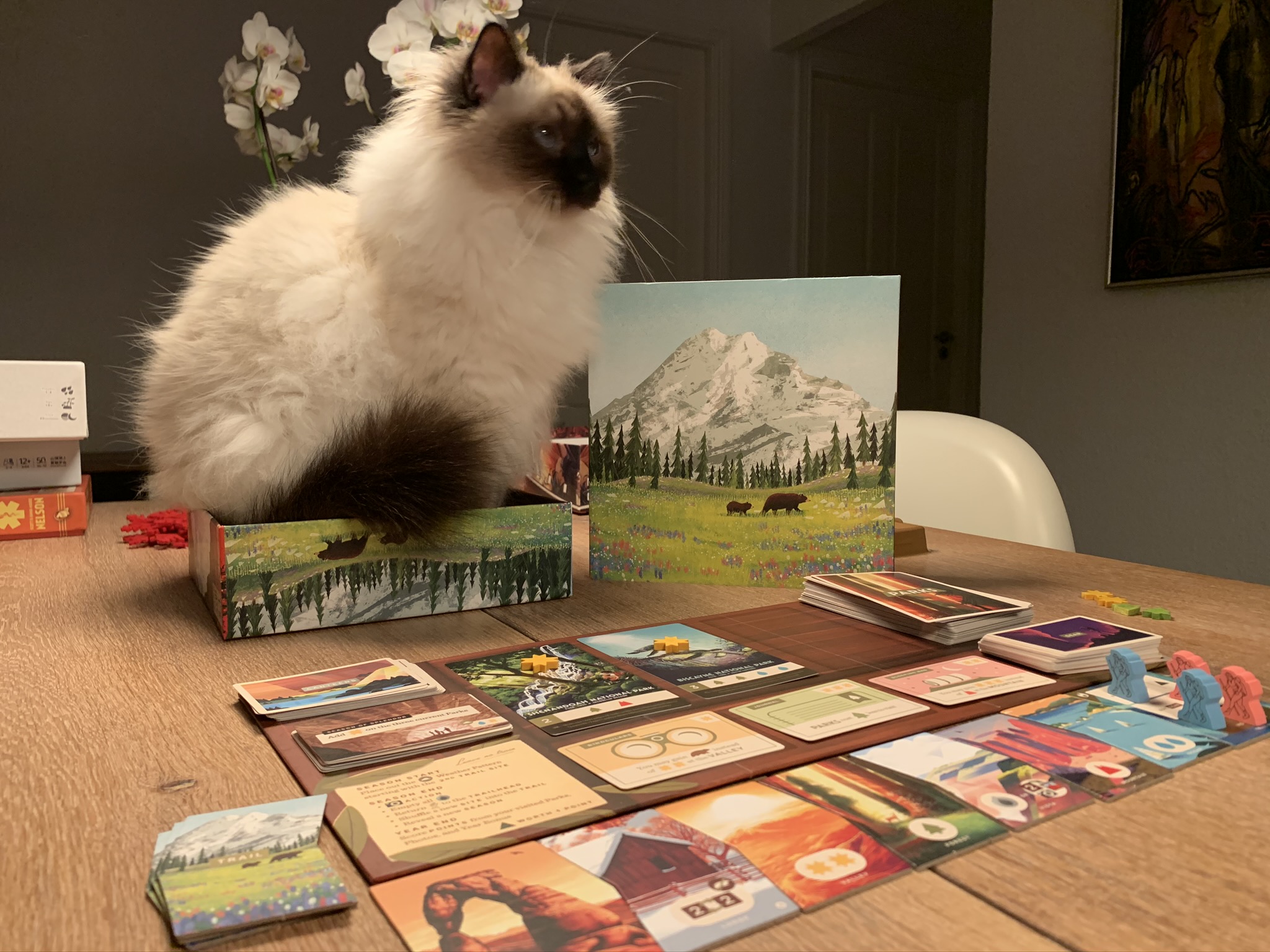 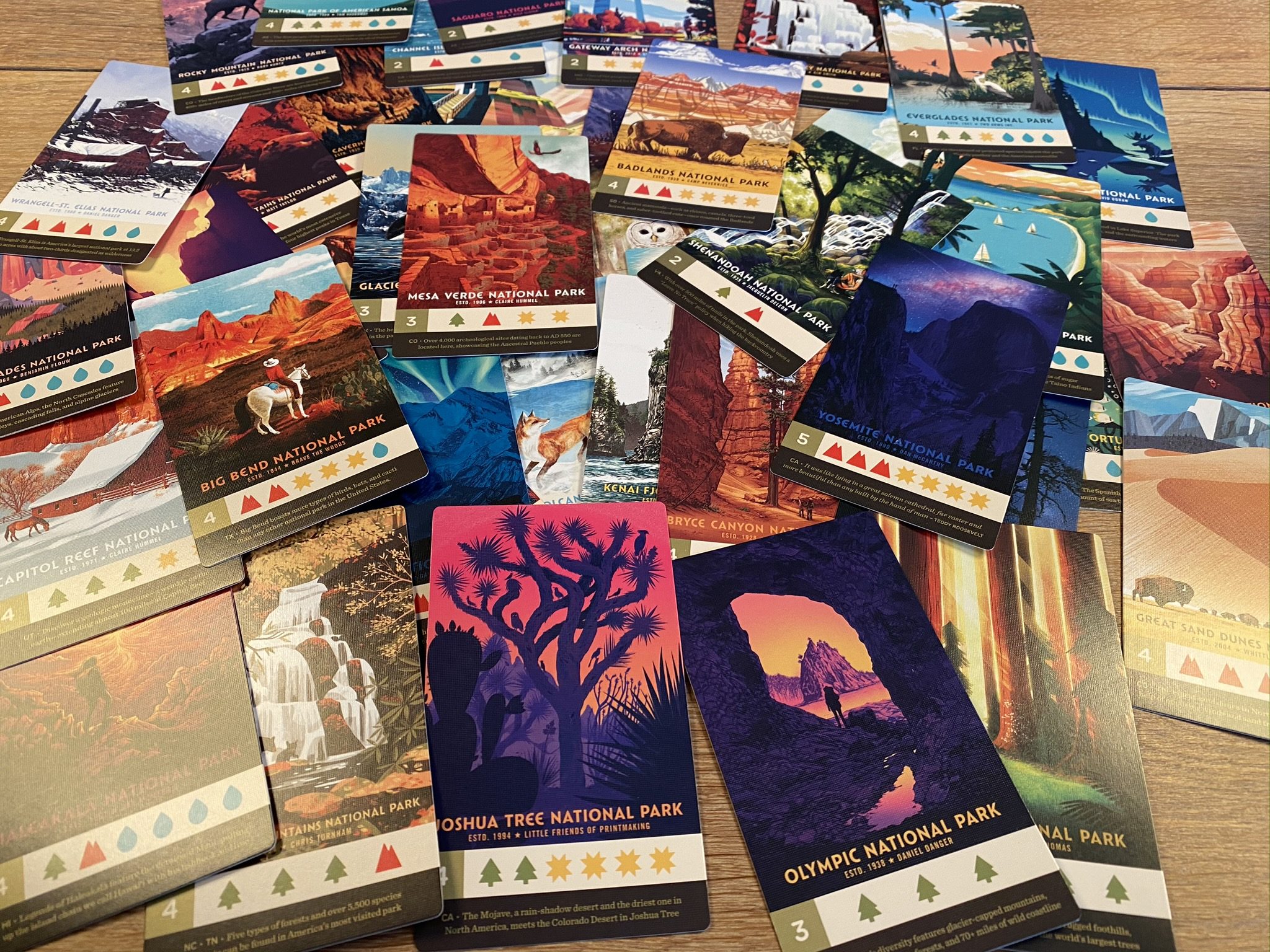 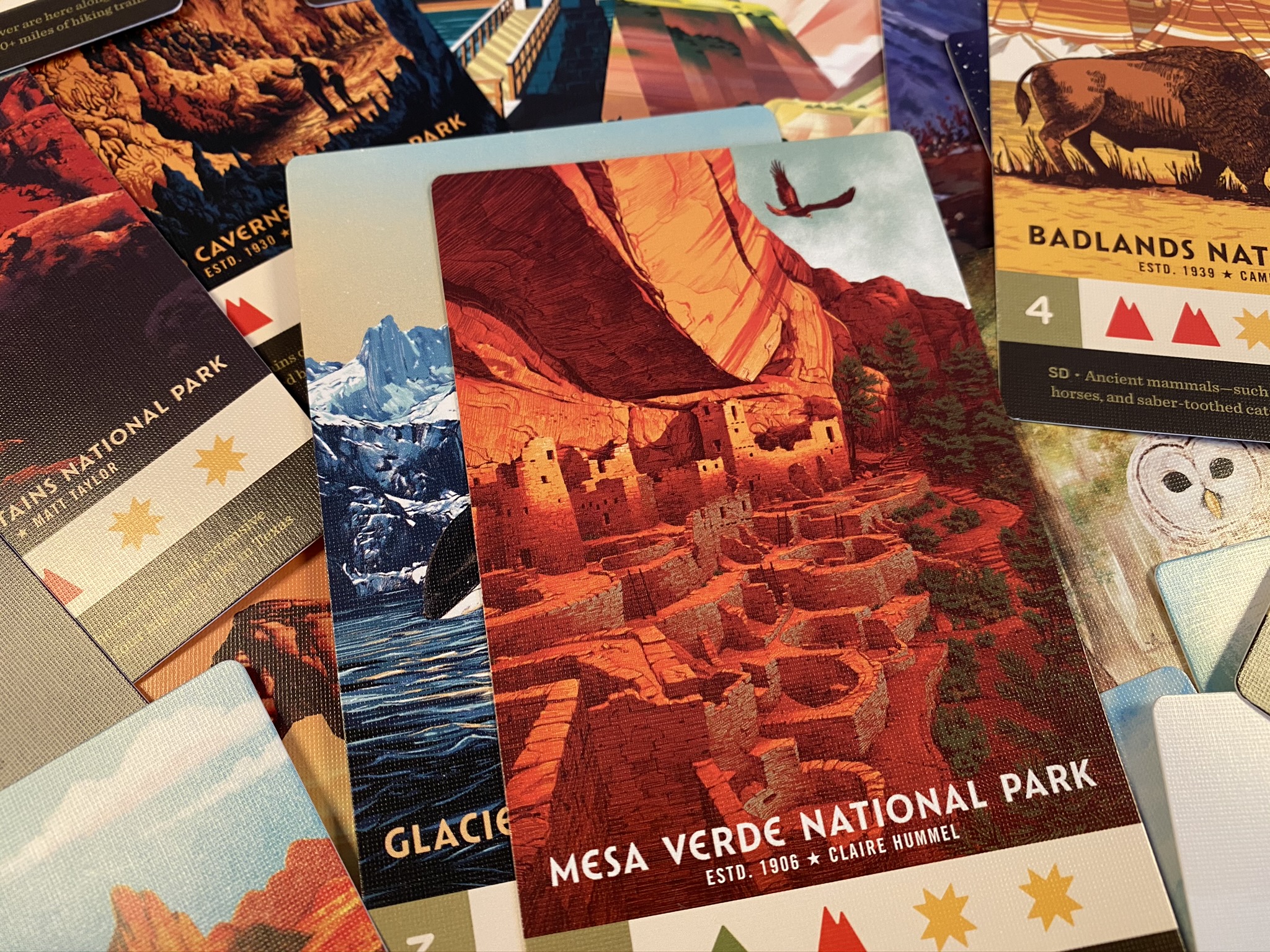 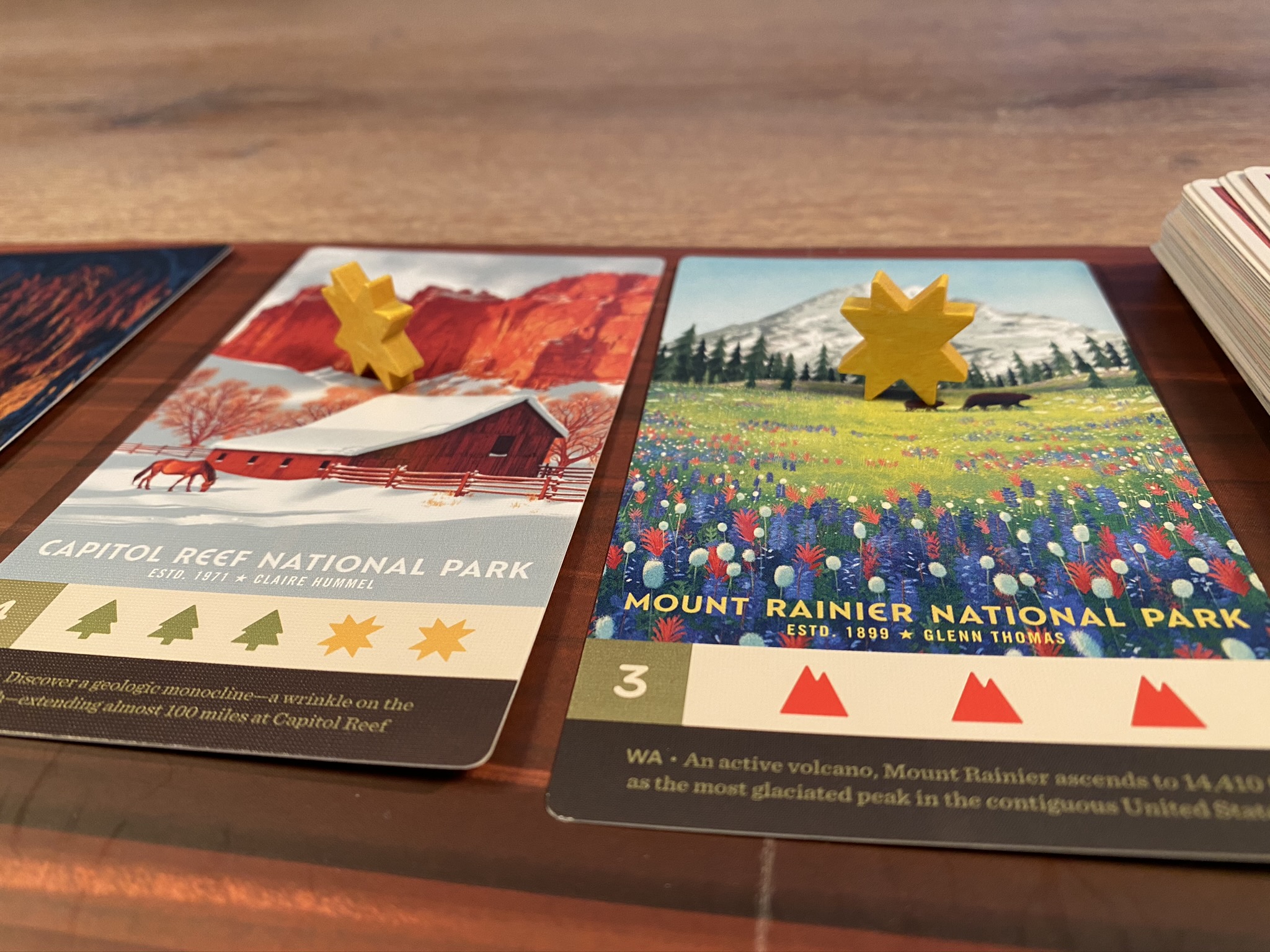 A few park cards with weather token from special season 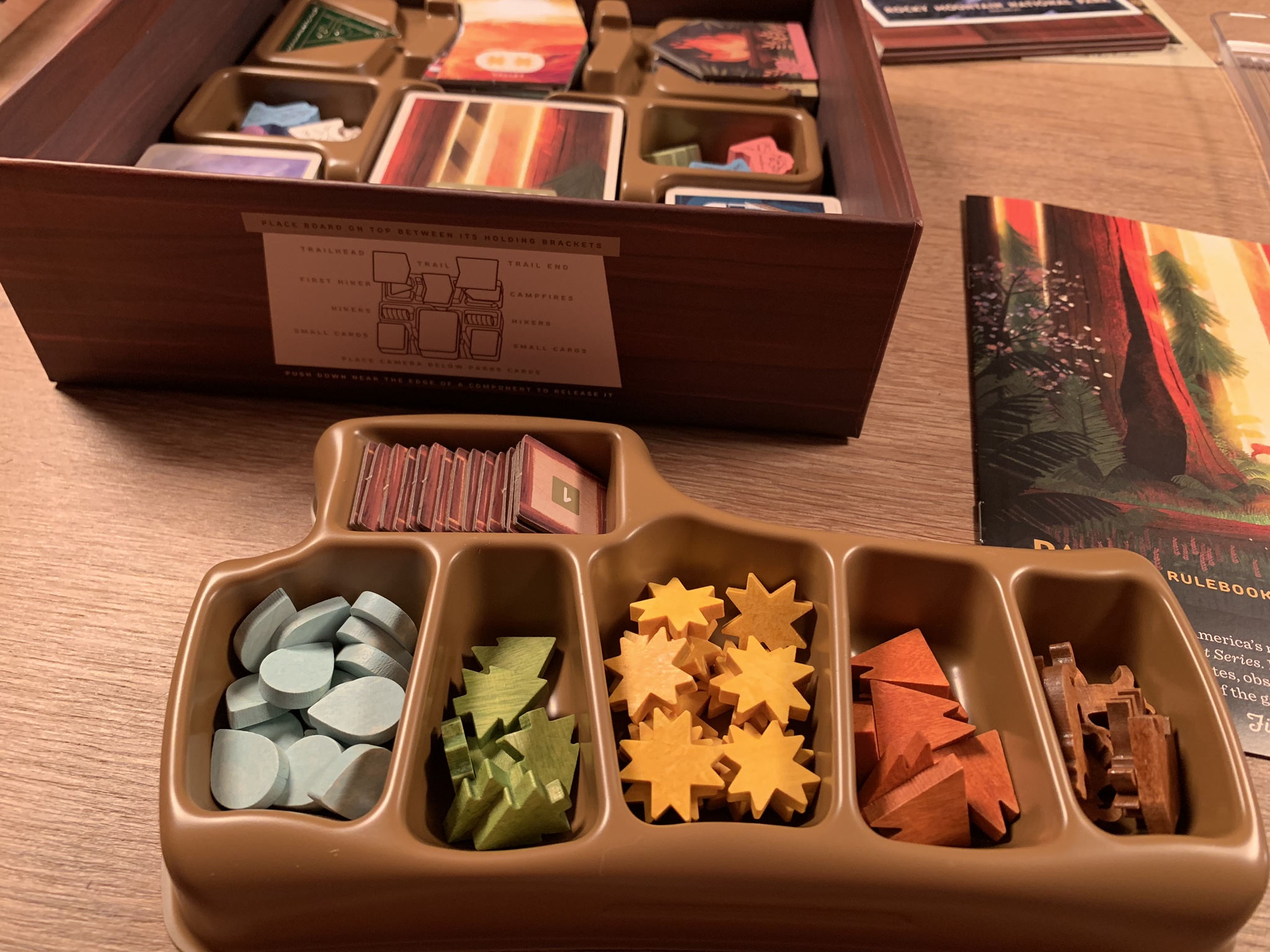 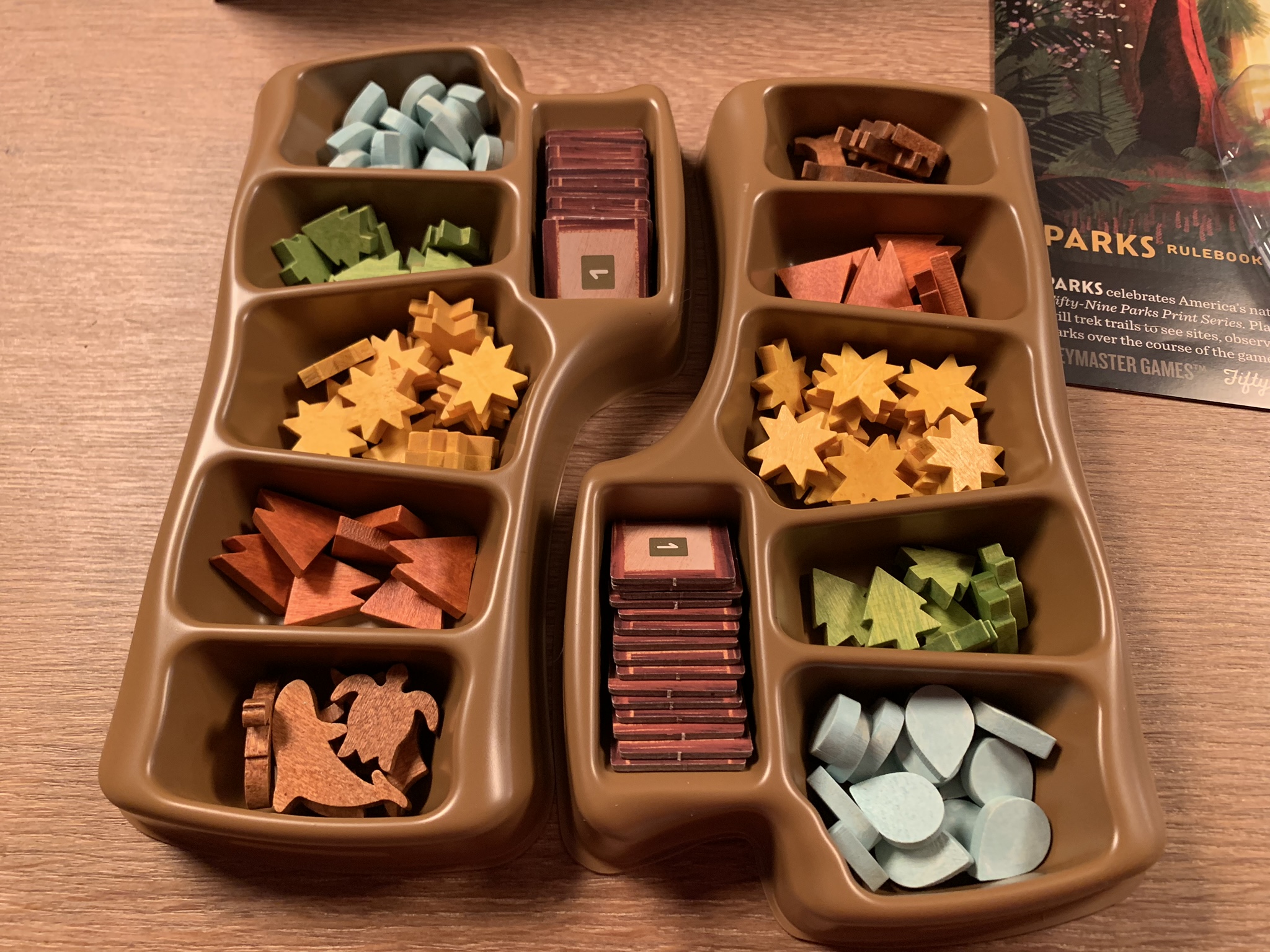 Beautiful and practical trays for tokens, used during game play 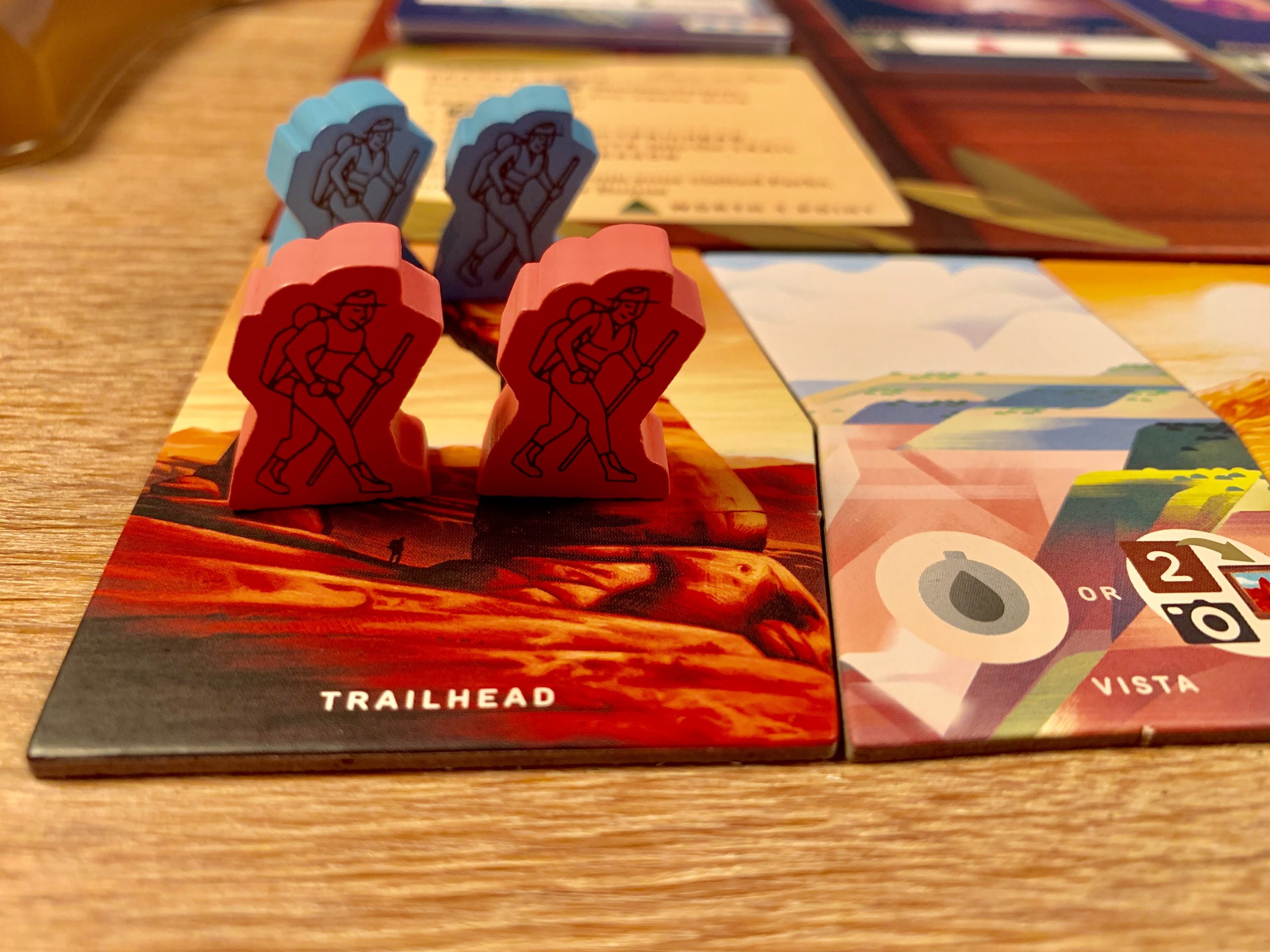 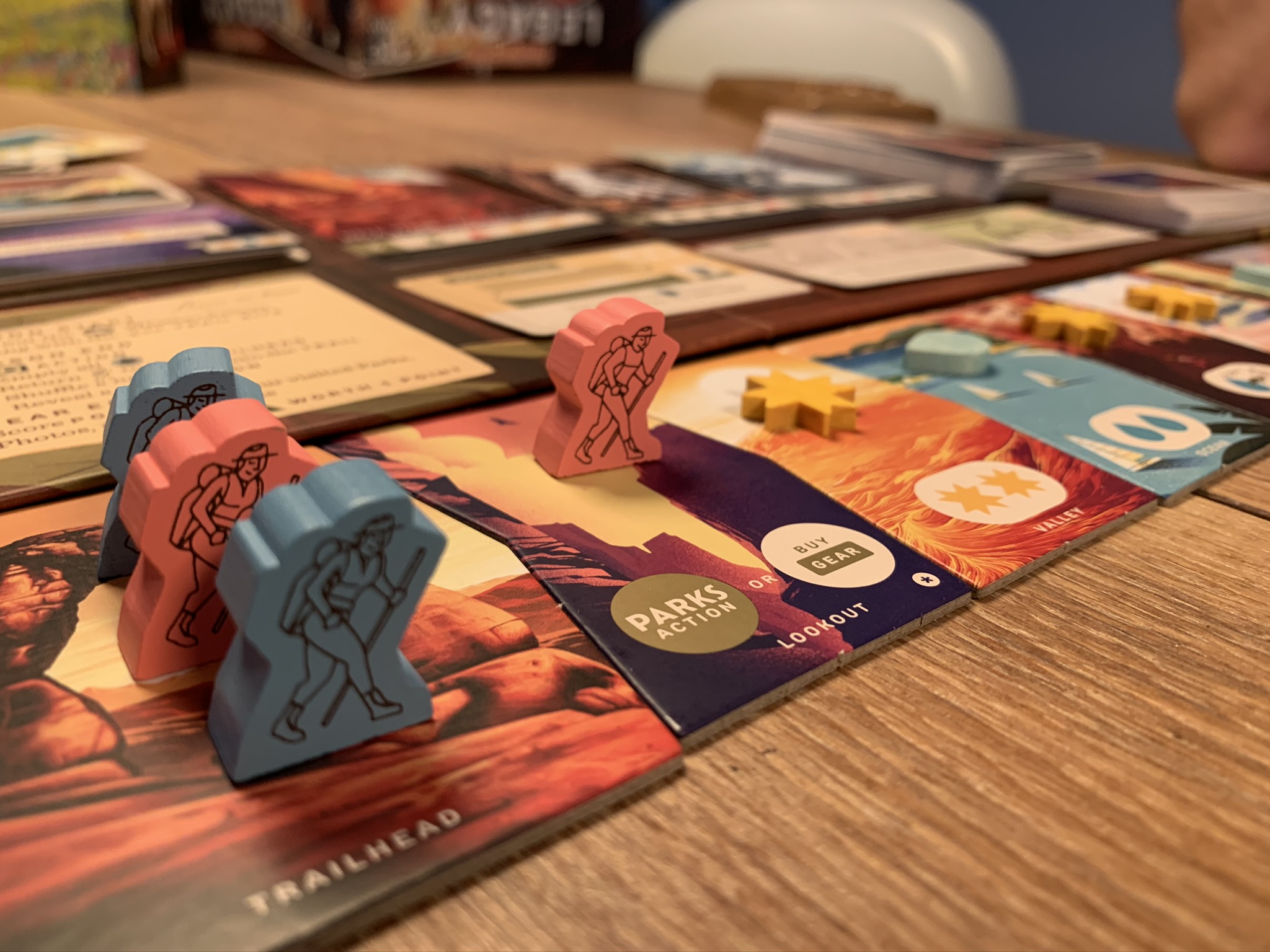 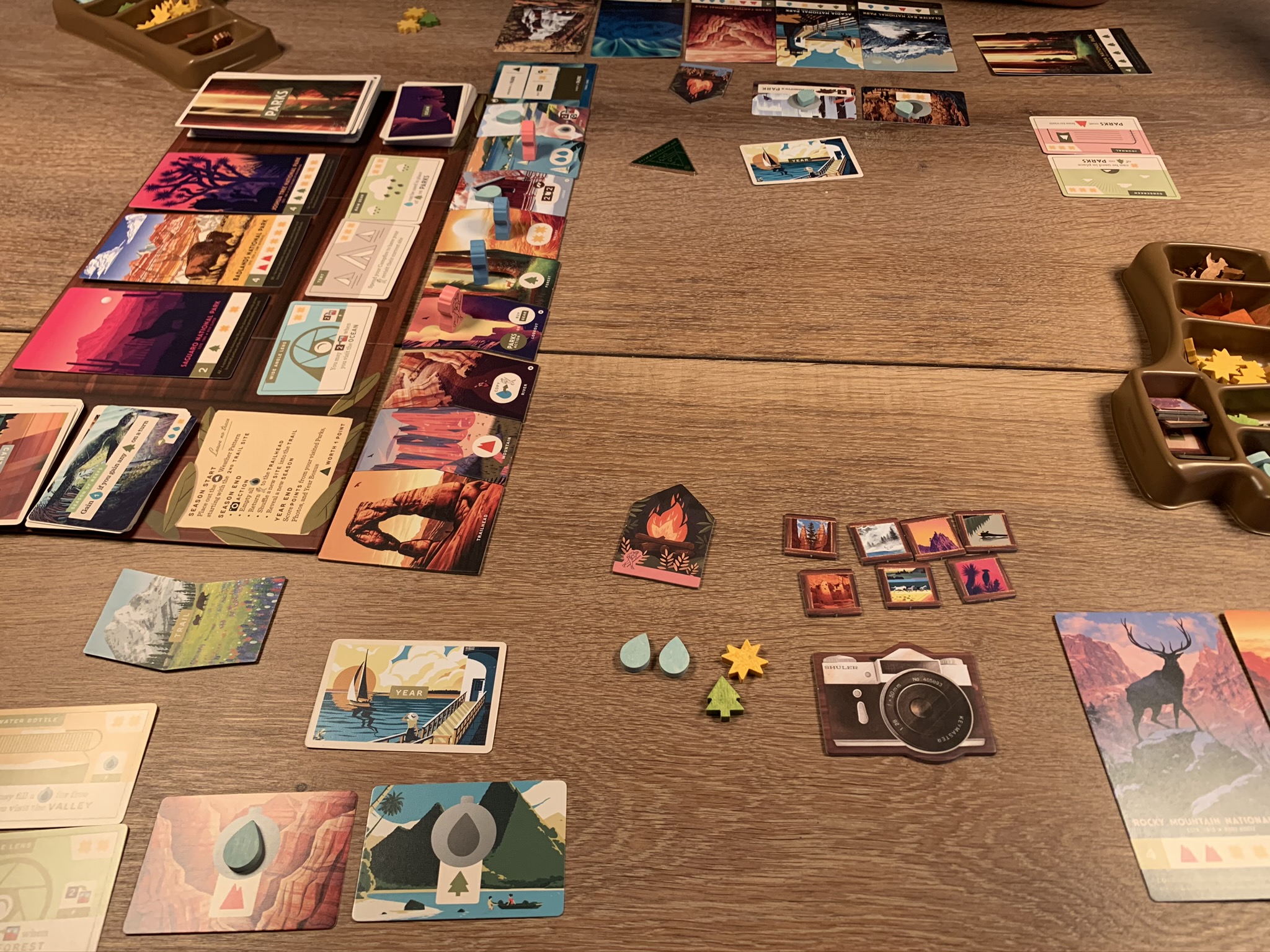 Setup and mid play for 2 players 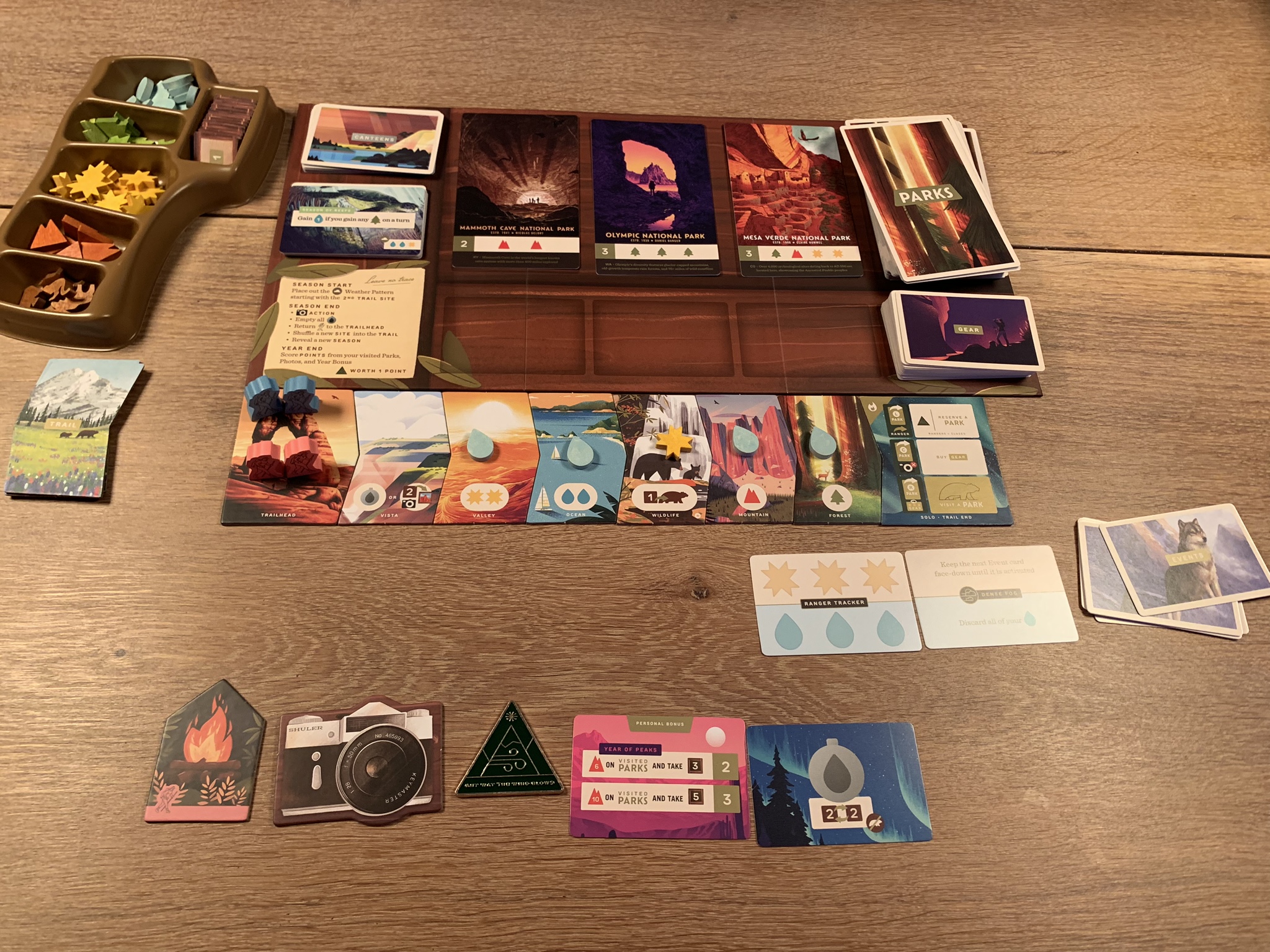 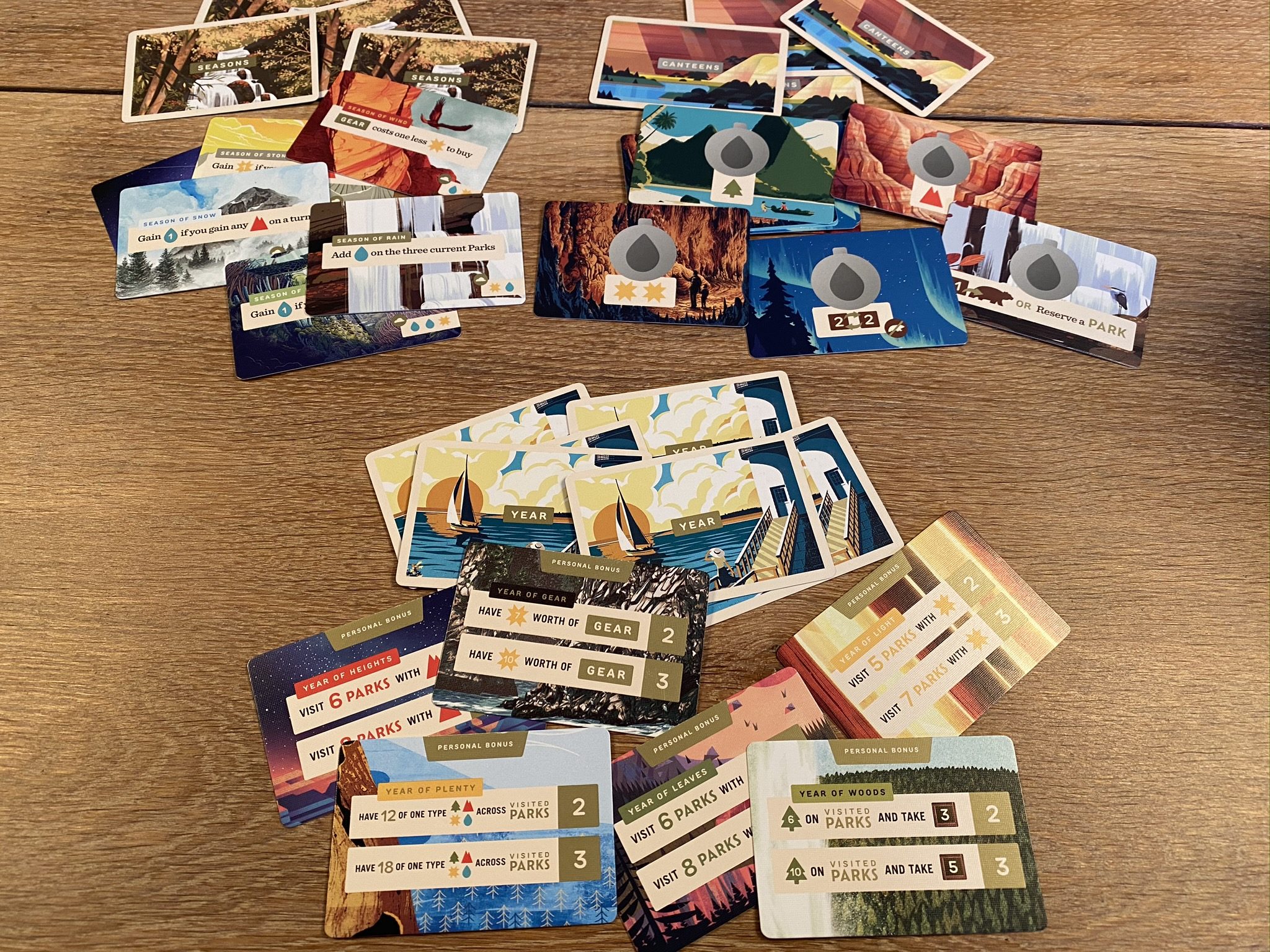 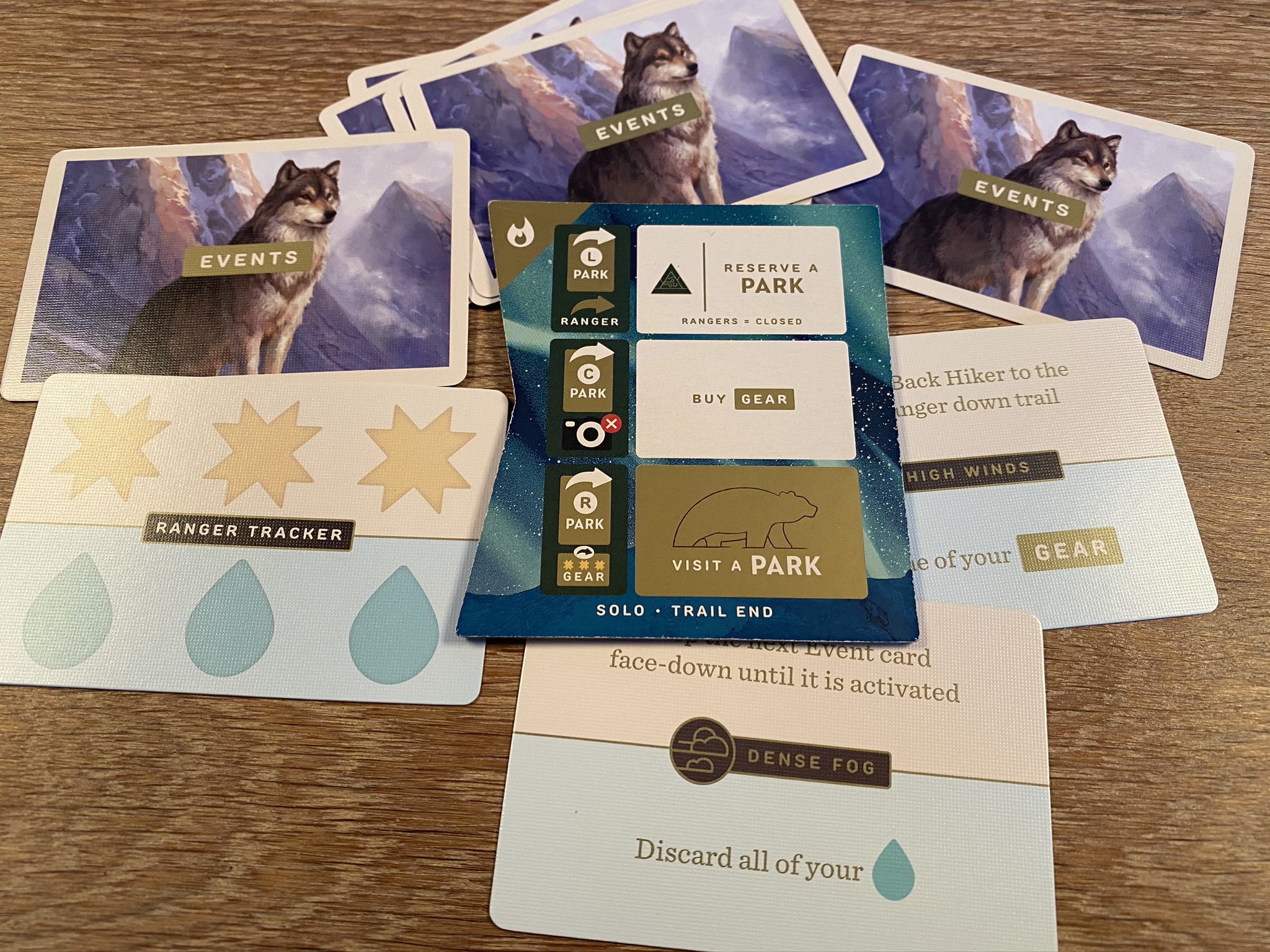 Solo cards and back side of trail end tile 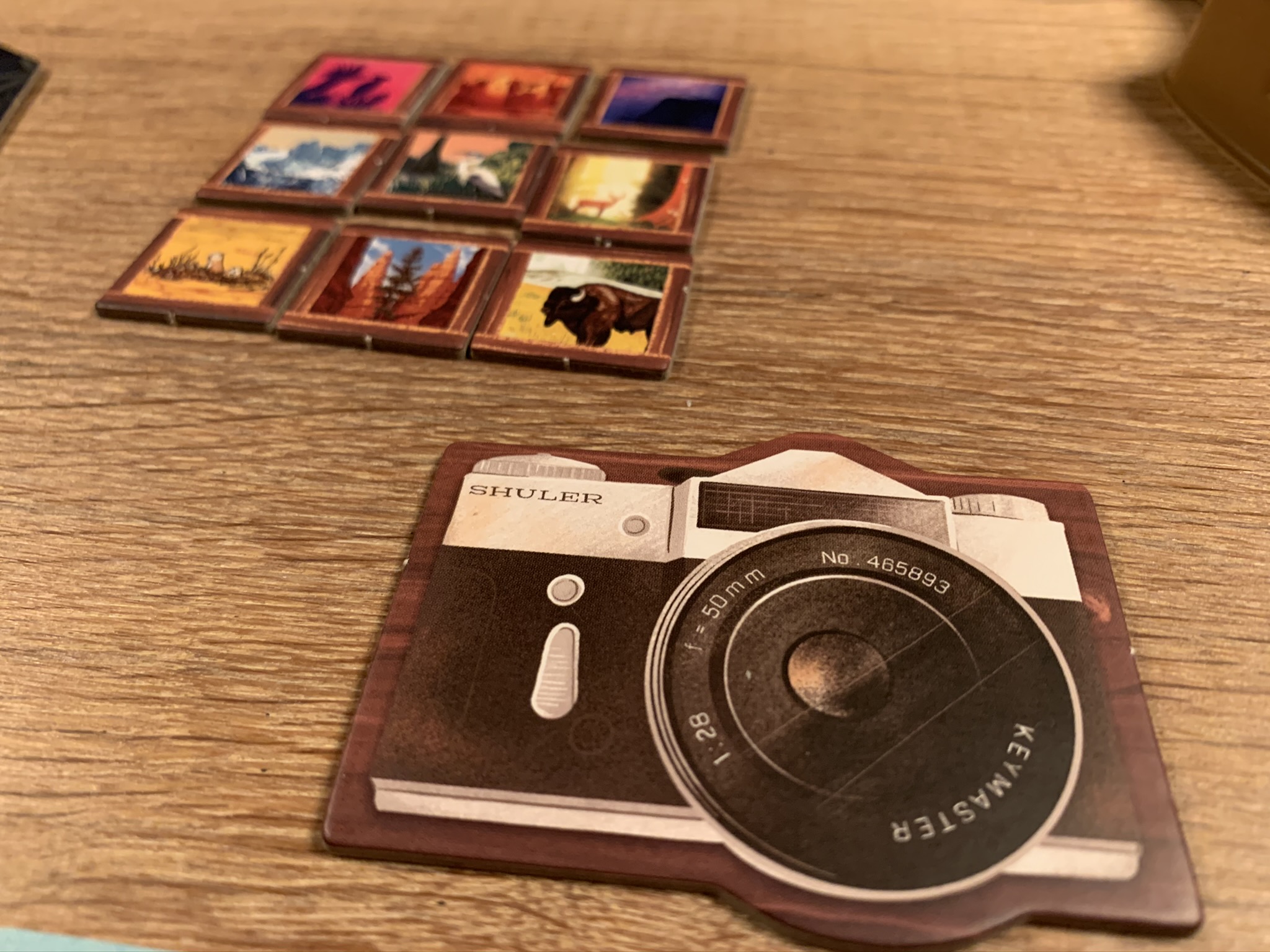 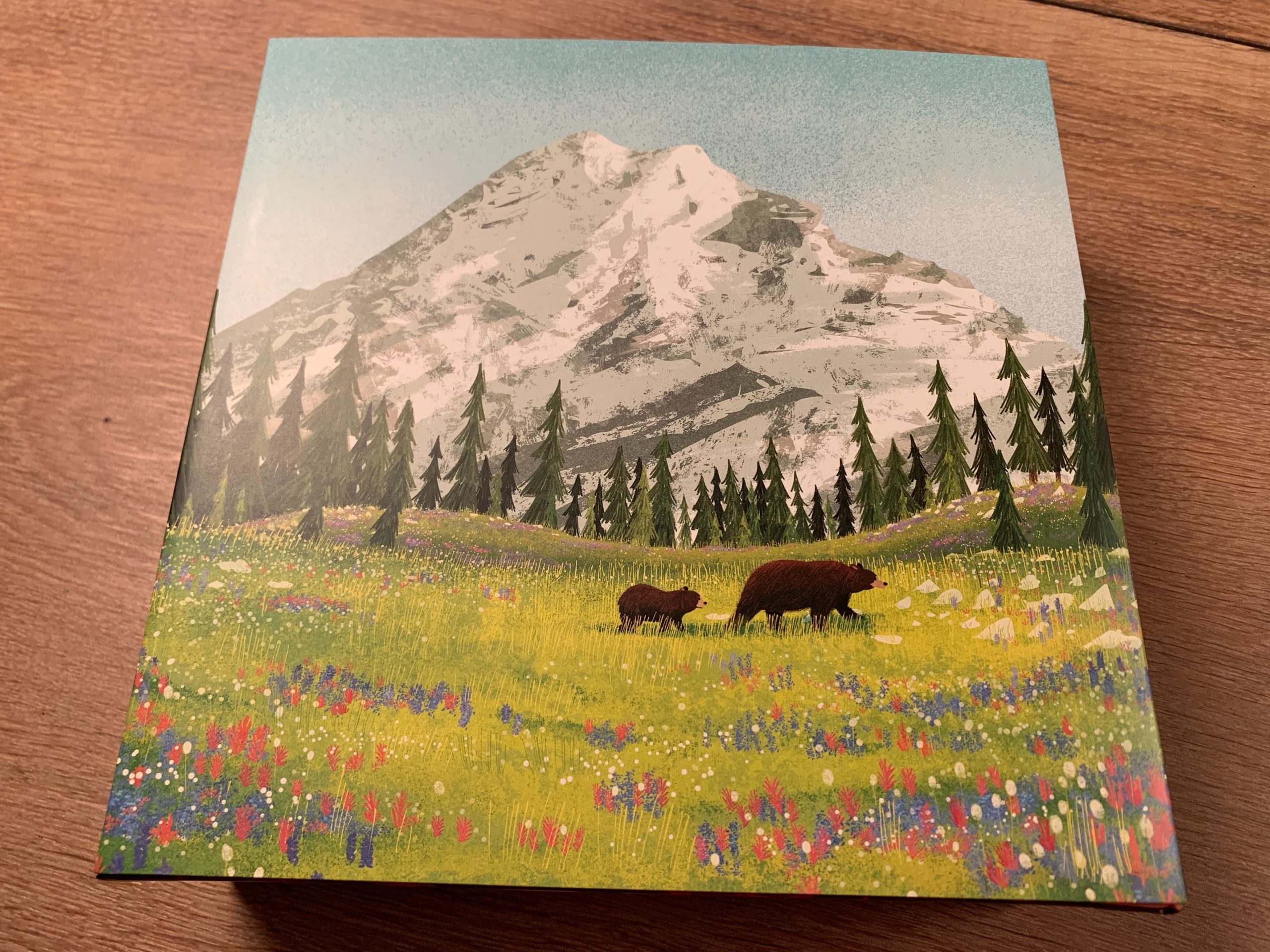 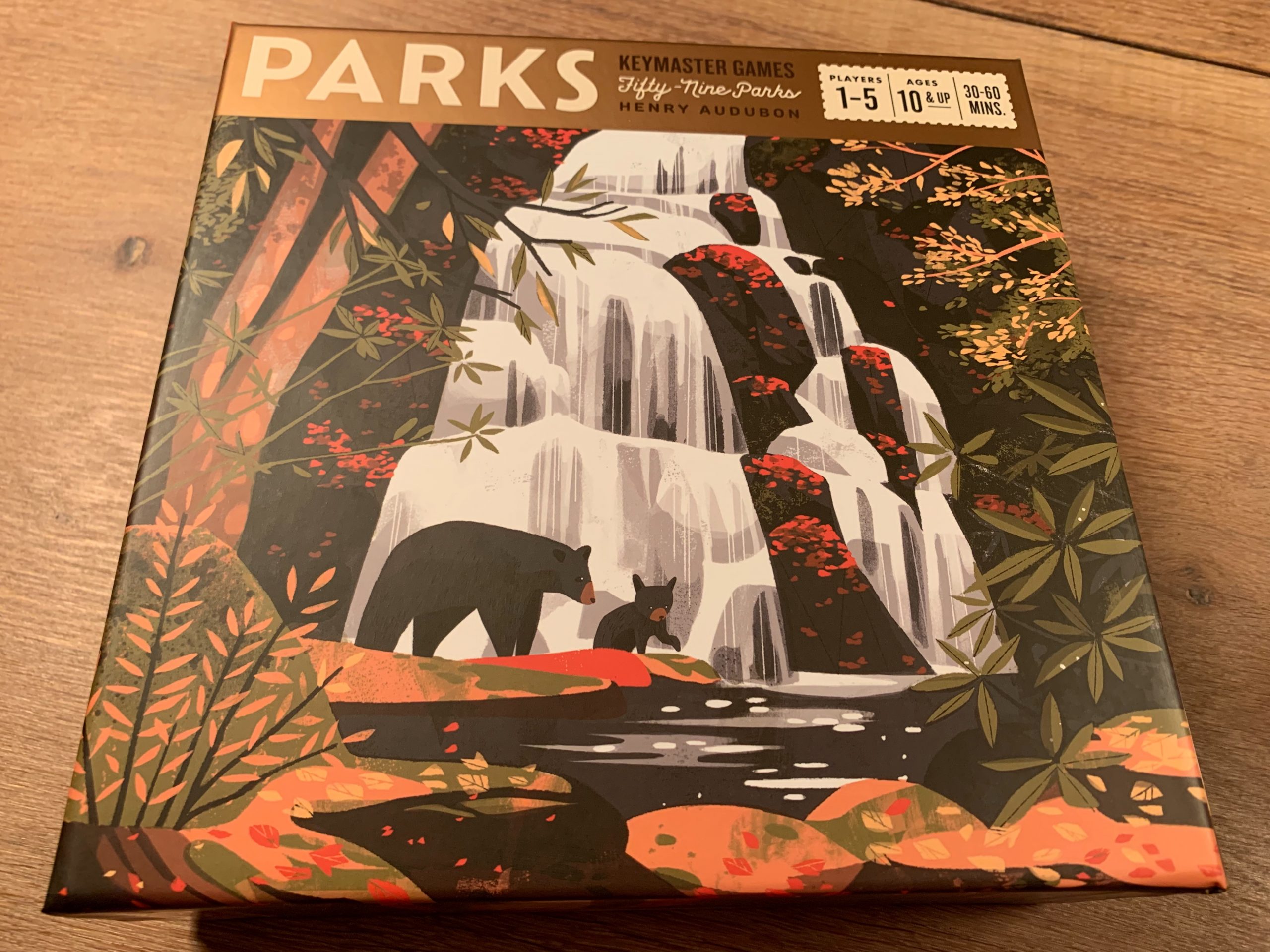 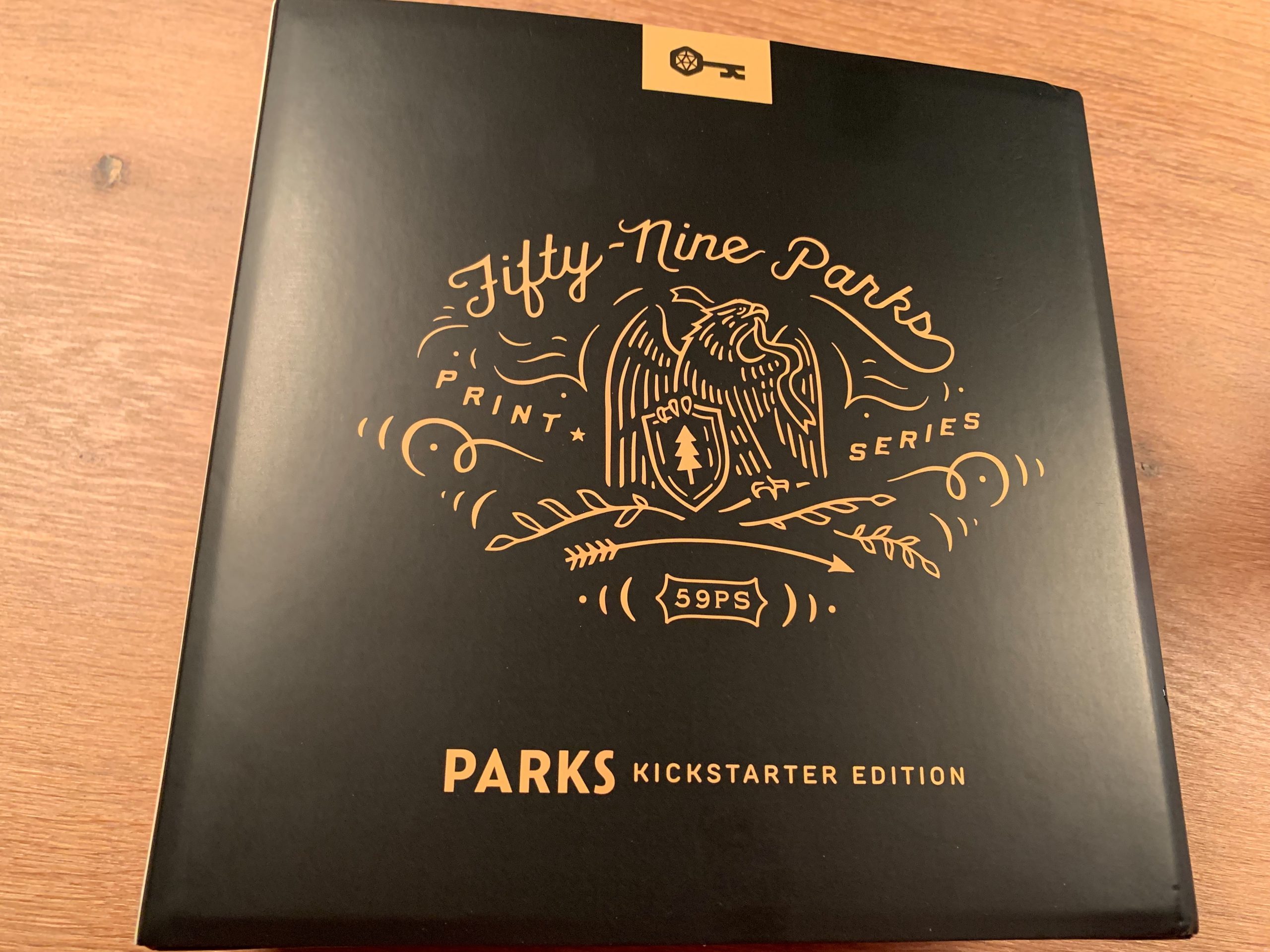 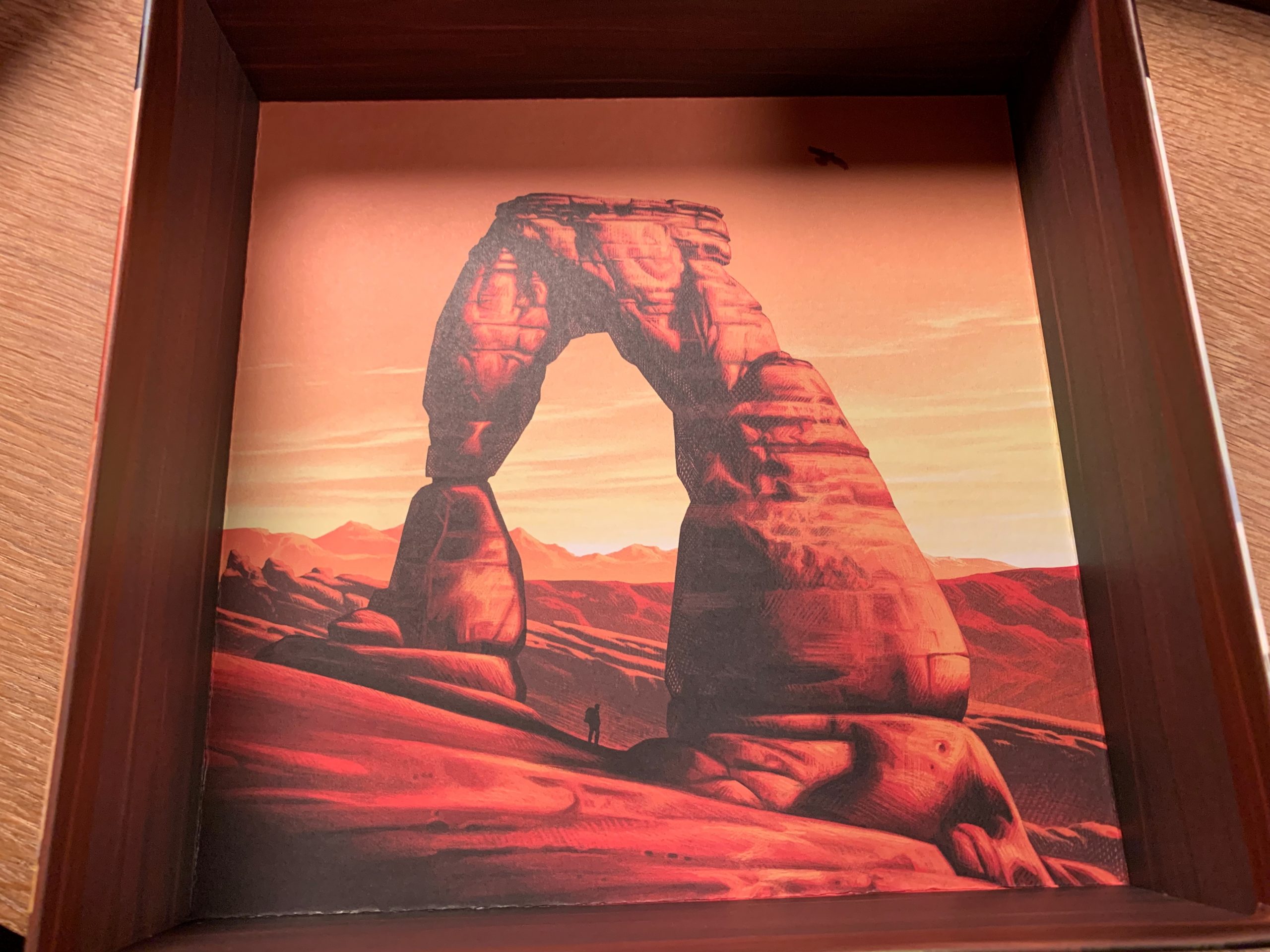 The box is on the small side, so I won’t be laying down during this game. It’s nice and sturdy so I feel it could withstand a few of my scratches, although seeing as my humans really like the look of the box itself, I better be a little careful after all. The sleeve for the box really intrigues me, and I really have to force myself not to stick my head in there, as it might break.

The worst has come true, the game comes with trays with LIDS to be used during game play – this reduces the amount of tokens I can play with and is definitely not preferred. I will have to be extra focused on the bits and pieces my humans have in front of them.

On the other hand there are multiple cards and tiles that I can slide on, creating a whole mess; which will be my preferred method of disrupting play time.