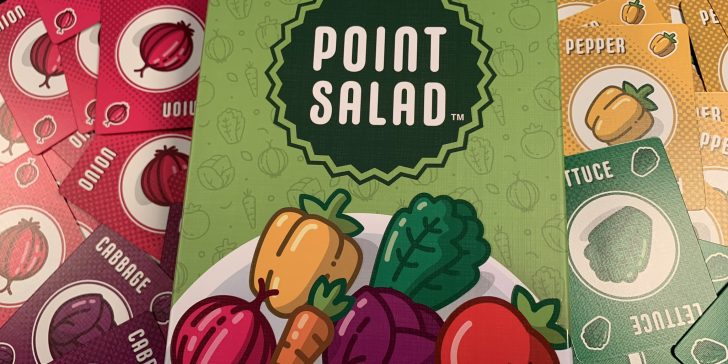 You don’t have to make the prettiest and most varied salad for it to be good or score the most points.

Point Salad is a quick little card game with simple rules, but some really “meaty” decisions.

Depending on the number of players you use x amount of each 6 vegetables (Carrot, Salad, Onion, Pepper, Cabbage, Tomato) and shuffle them together. Each card is unique in the combination of front and back.

Divide the deck roughly in 3 stacks with the point side up. Flip 2 cards from each stack to form 2 rows of 3 underneath the card stacks.

On your turn you have only 2 choices; take 2 vegetables from the market or take the top point card from one of the 3 stacks – but you have to do an action – in the end you sometimes wish you didn’t have to. Then as an optional action you can flip one of your point cards to reveal the vegetable and put in in your display/salad.

A reason for flipping a point card to a vegetable is mostly because some cards can give you negative points, so it might be a better choice turning them into a vegetable – BUT you can’t do the opposite.

The game ends when ALL cards have been drafted.

I got very excited about this game, seeing the colors and how simple it should be to play so I had it express shipped from the US. And this game didn’t disappoint at all. It’s very easy to teach; draw 2 vegetable cards or 1 point card. Just be sure you get both point cards and vegetable cards – but you actually don’t have to have that many vegetable to win – just the right ones according to your point cards. For instance having only carrots and point cards scoring carrots.

It’s quick to play and unless you are the 5-6 players the cards you don’t use in the first game can be used in the next, no need to reshuffle everything – this makes it quick to play 2 or 3 (in a 2 player game) games in a row.

You need to adapt the strategy to each unique game but also throughout the game; which might make some not like the game. I really like that I can have a basic strategy, but someone can ruin it, making me adapt and be involved in the game.

With all the unique combinations of ways to score points and the different vegetables on the front of them it makes the game unique every time, especially since you take some of the cards out with less than 6 players. As it’s impossible to make a bullet proof strategy that works every time it makes you want to play again to see which strategy pays out this time.

This game has a good range in player count, going from 2 to 6 players. The basic game play is the same, but the strategy is very different, when you go beyond 4 players. In a 2 player game it’s very back and forth with a huge chance of still getting the cards you need; a possibility could be to maybe only have 2 stacks instead of 3 stacks.

With 5-6 players it can seem a bit more chaotic and harder to make a strategy because almost certainly everything will have chanced when it’s your turn again; as there are so many turns and so few options. Of course you could get lucky and your precious card giving you a huge amount of points is still there.

I think the game is best at 3-4 players, but I would play at all player counts, you probably just have to think of the game as a bit more casual with less strategy and more luck.

The only questions we had, which we house ruled are the cards saying “have the fewest/most cards” and “odd/even amount of cards” we interpreted 0 cards as having the fewest and as even. We couldn’t find it in the rules. I’m not sure if this is the best conclusion we did, as it makes you get greedy taking all the “fewest” and “odd/even cards” of the different vegetables, potentially scoring many points for having almost no vegetable cards and without doing much to try and achieve them.

There is no official solo variant. I have tried a simple variant with rolling a die to determining if the AI should take vegetables or point cards and then rolling again to see which to take. This made me win with a very high score. Then I just tried playing as 2-handed with doing the best I could for both, and it worked good, but wasn’t really fun. Some smart Automa should be the way to go. If someone comes up with it I will definitely try it.

Although I haven’t tried it yet, I think it would be perfect for remote play; no hidden information and just a few stacks of cards. The cards are clear to see on screen (color/vegetables, might be a bit harder with the point cards). But you need to have some space for all the cards on display for the different players, so 2-4 players would probably be the best player count.

Perfect potability especially if you take it out of the original box, which is a bit bigger than needed; it’s just a small stack of cards.

The cards are good quality and should last for quite some time. The art is simplistic but clear and inviting. The colors are great and together with the symbol and text it should be possible for almost everyone to distinguish the different vegetables. The colors makes me happy and draws me to the game; another reason to play the game.

The box is one of the first I have seen with the small holes on the side of the lid, so it’s easier to open (I know more games does it, I just have not come across that many yet). I prefer the look without it, but so much easier to open; and I might miss the box farting 😀 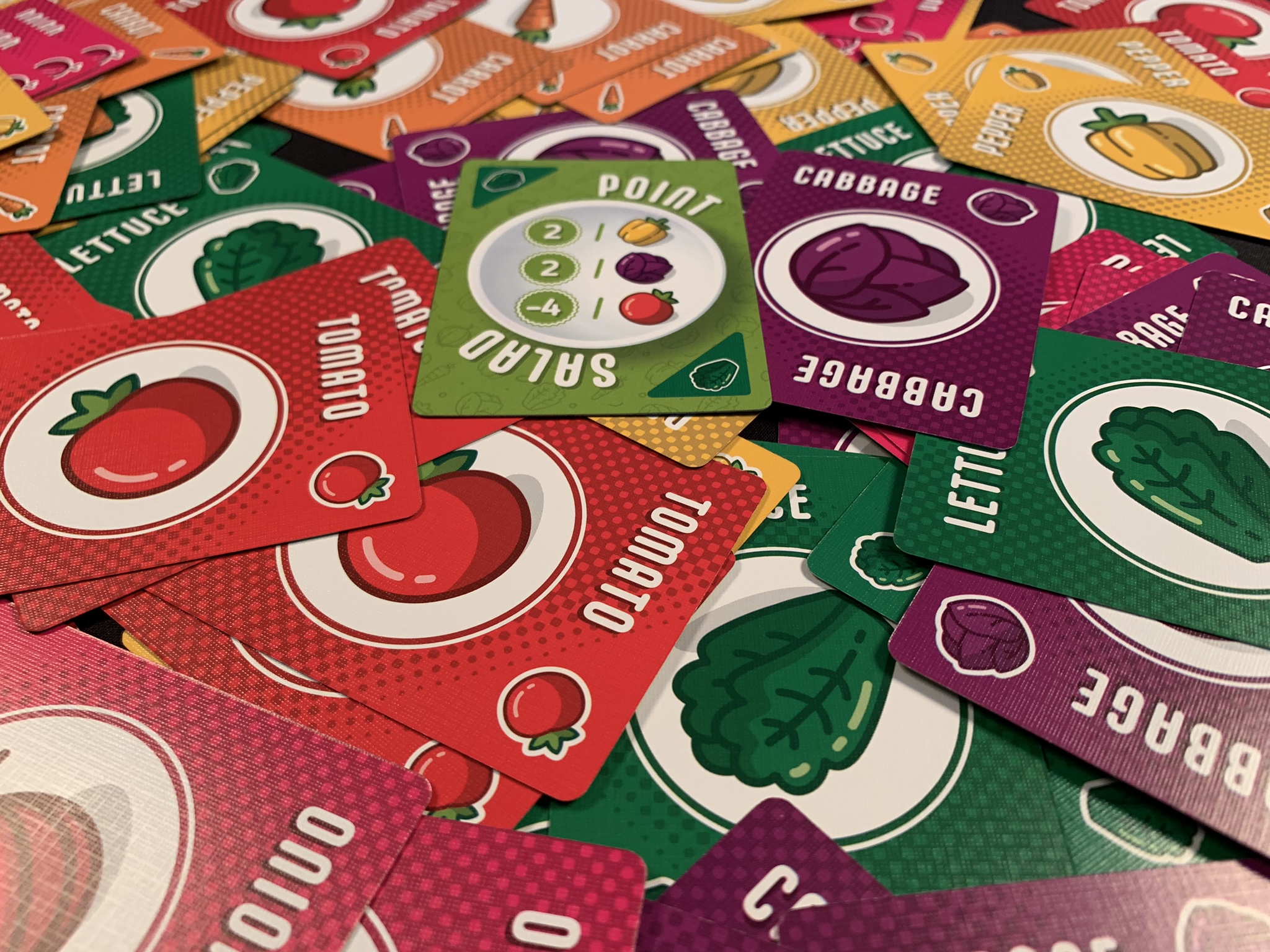 Double-sided cards, point card in the middle with vegetables 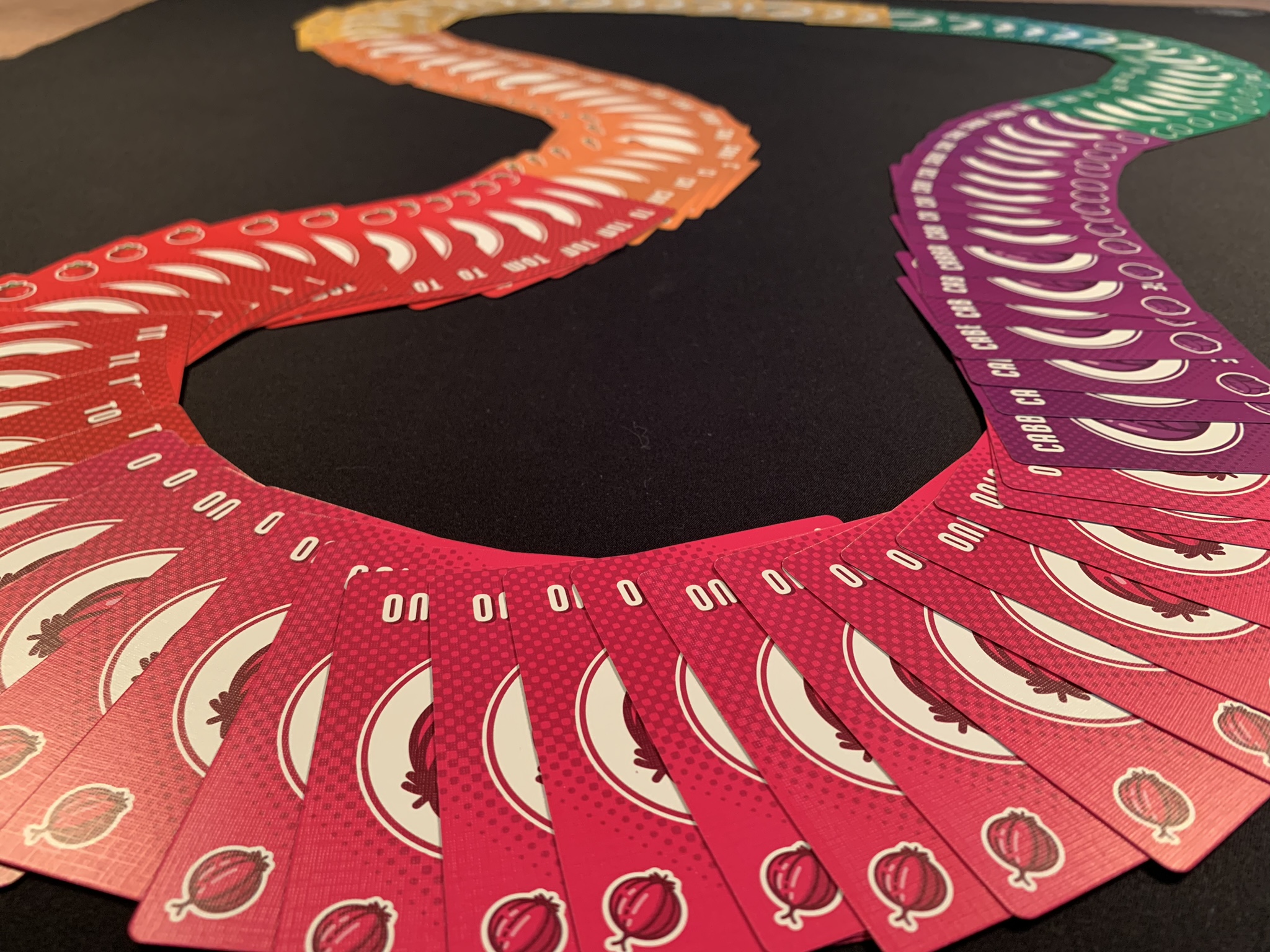 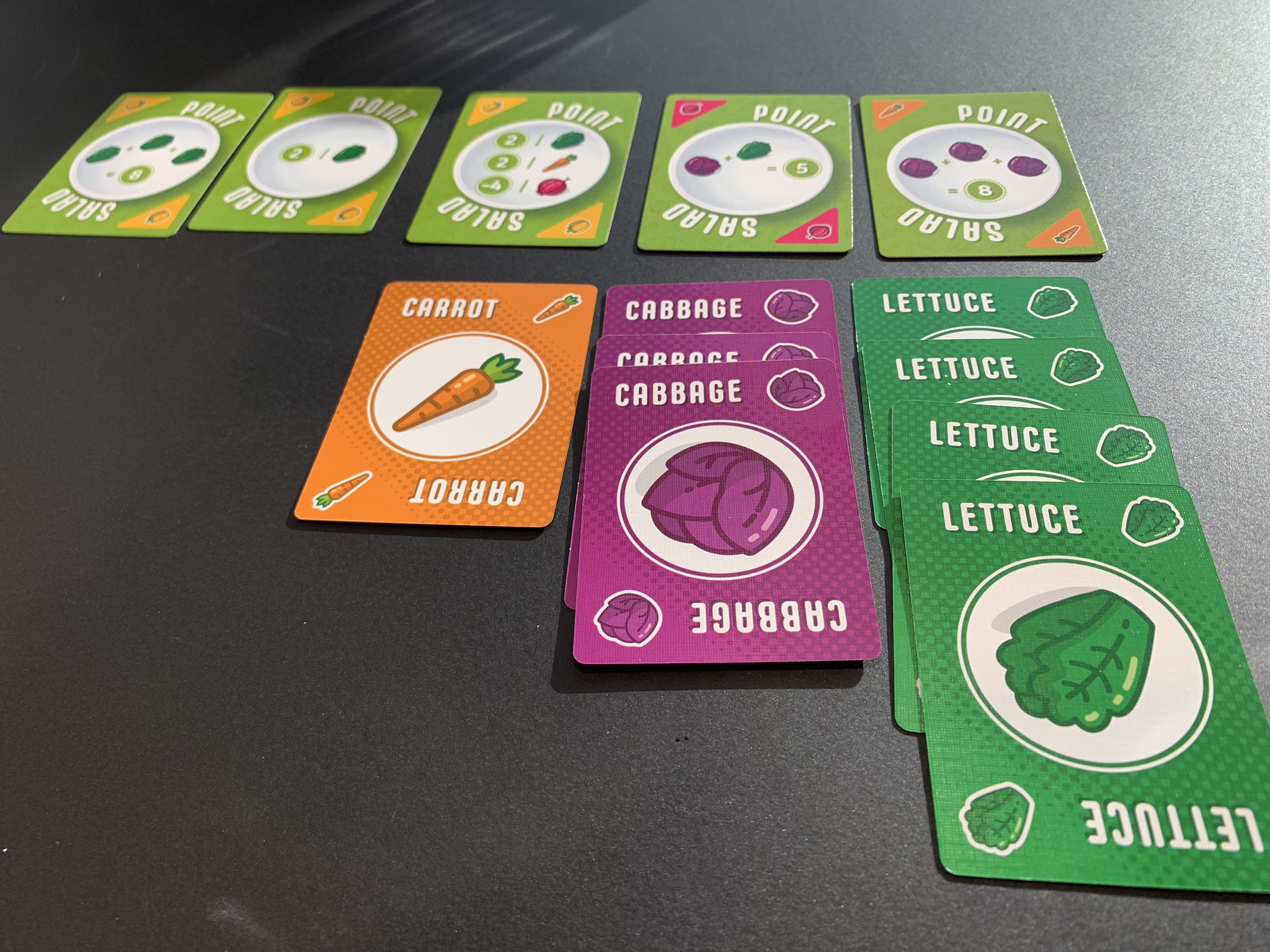 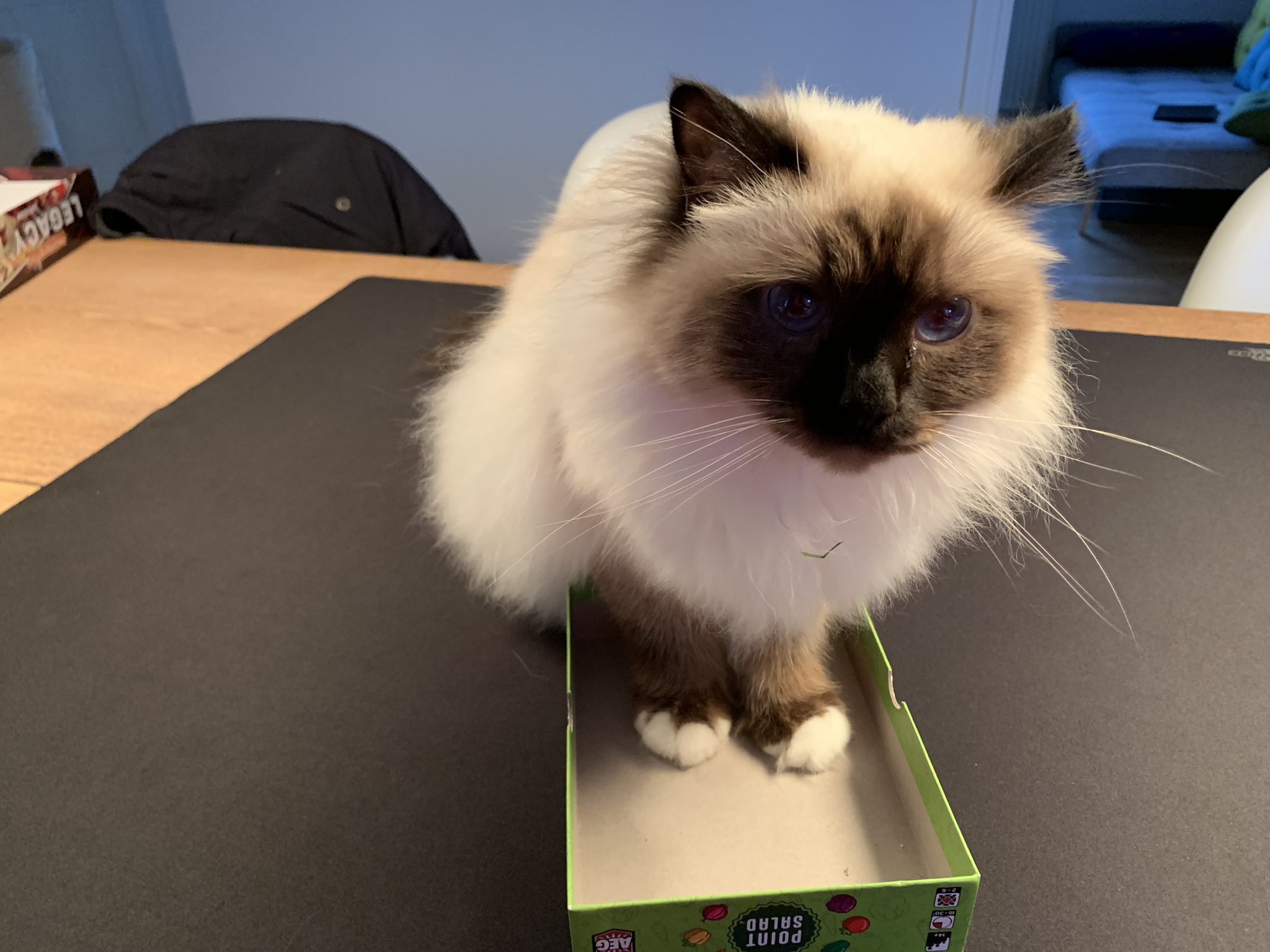 Box fitting - it's too small! 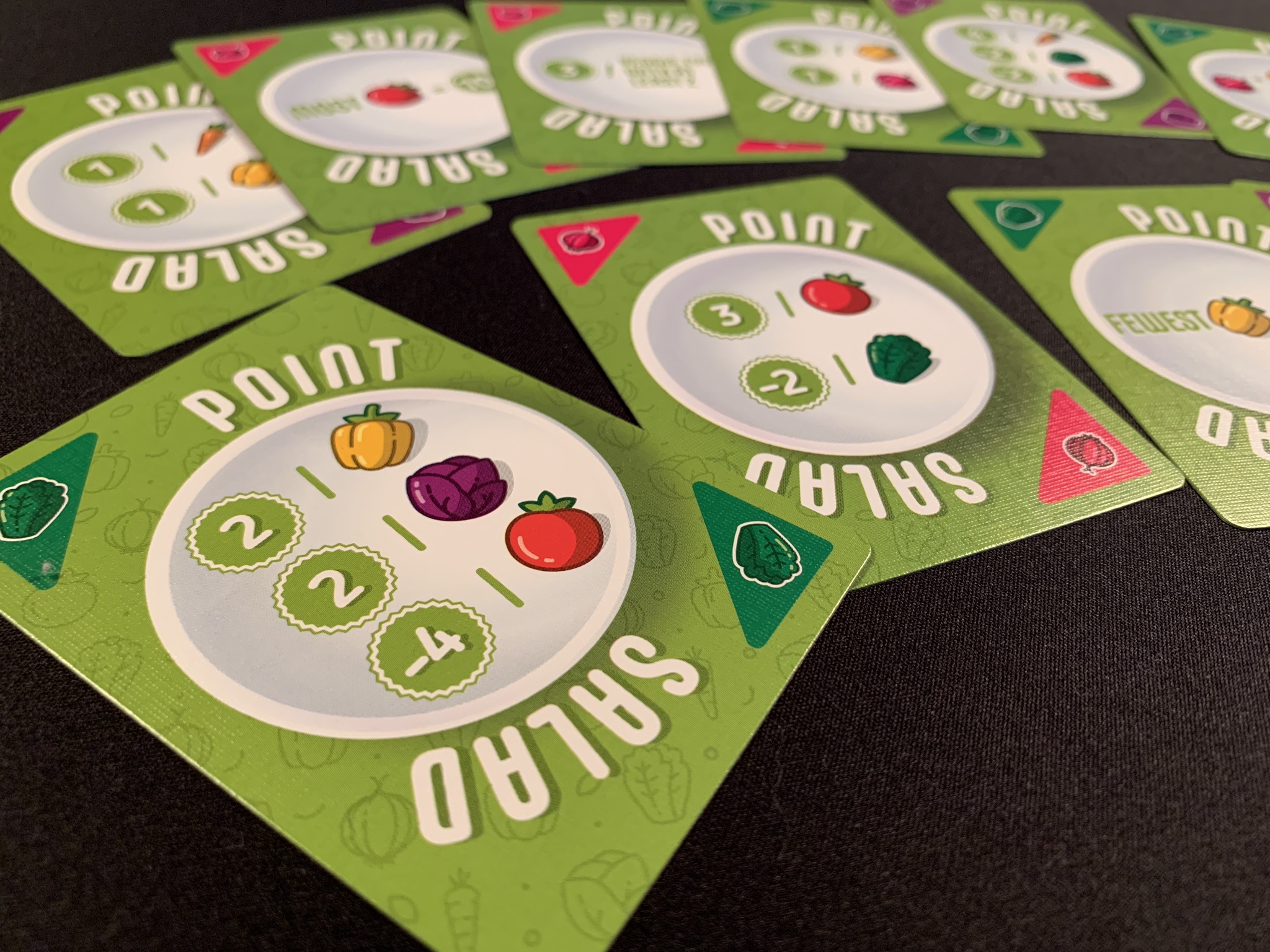 Point side of the cards, vegetables on the other side 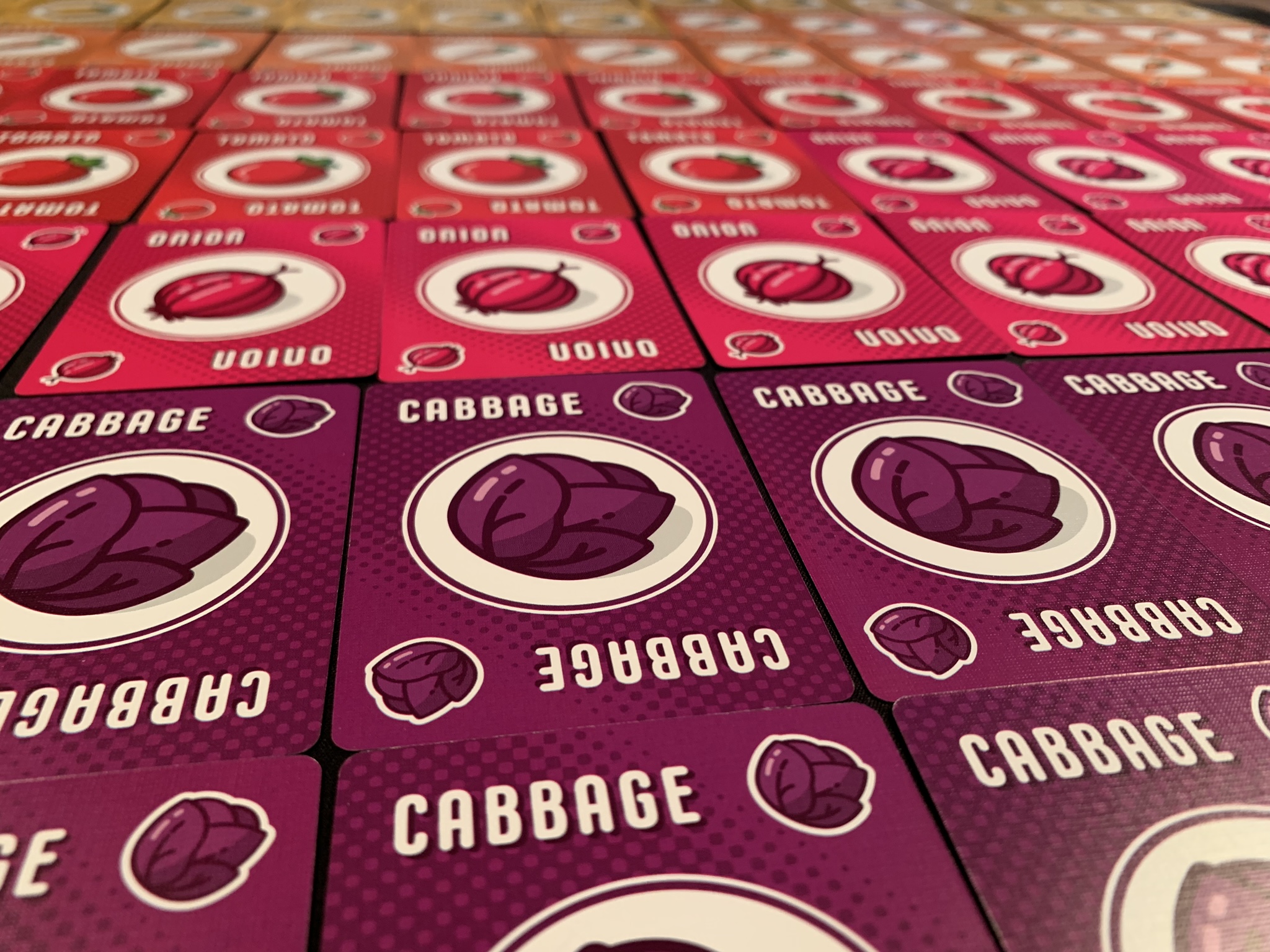 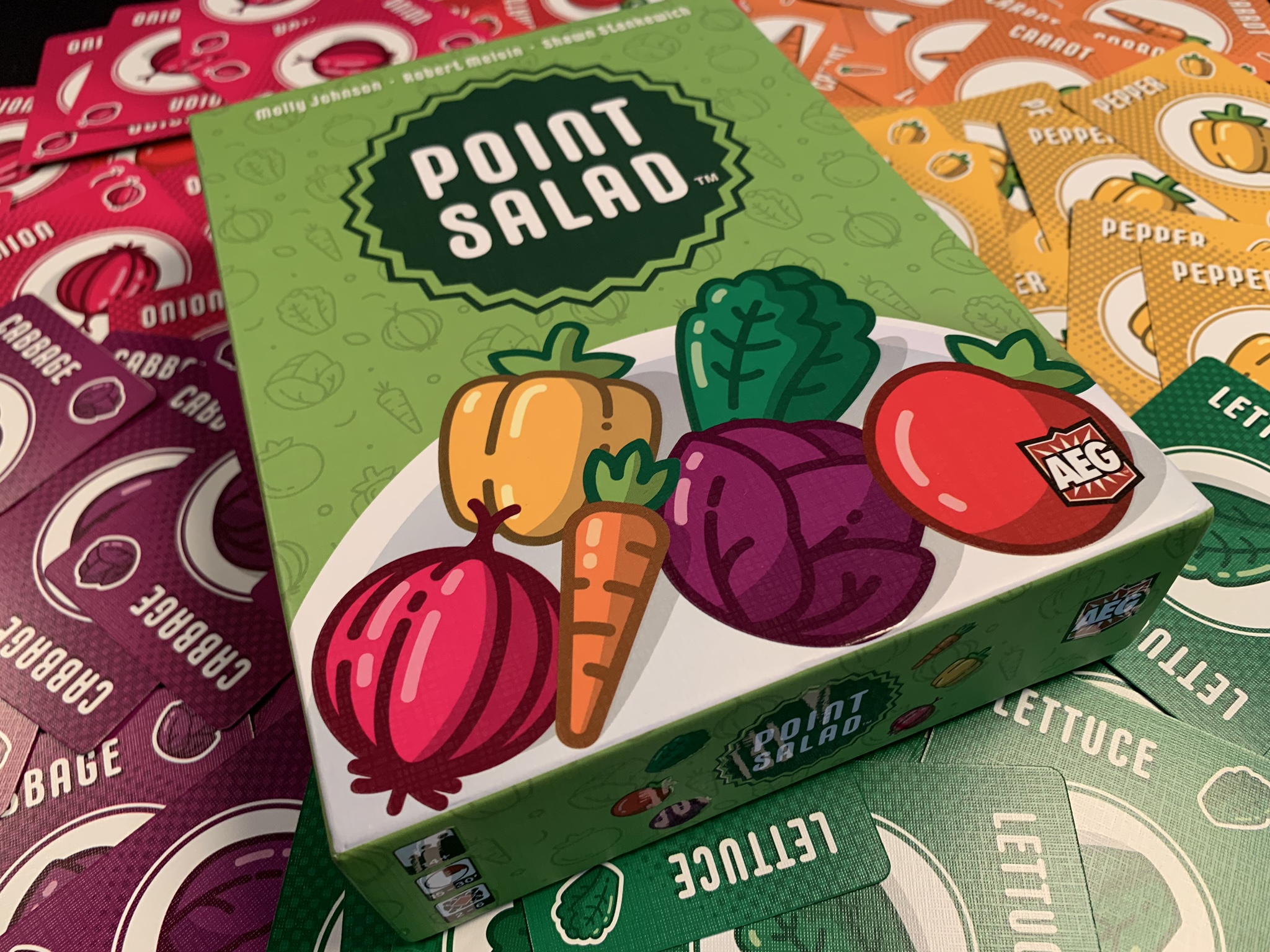 No way I can fit in that box, but it doesn’t stop me from trying, but that is just to prove to my human, nothing is impossible. There is not much to say to this game, for me it’s boring, ONLY a few cards and not much to mess up. I can always just play with the cards but the diversity for how to irritate my human is limited. Sure I will try my best still to get the attention of my human, but there are so many other games I would rather have my human TRY to play.