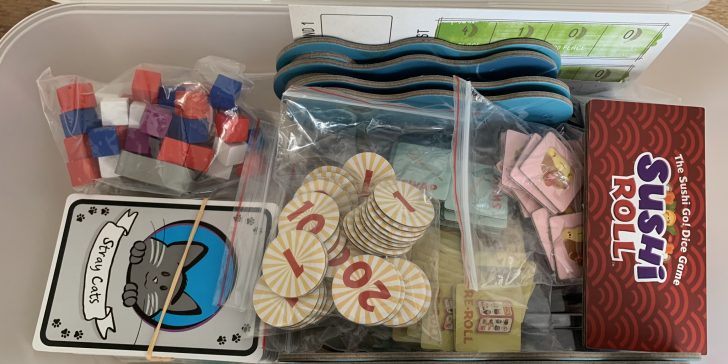 Tomorrow we are travelling, by plane, for a week somewhere sunny. Even though I have a #BoardGameHatingBoyfriend on holiday he is more willingly to please me. For this trip we are bringing:

A two-player racing game; to be the first to get their 4 polar bears to the finish but still gathering the most fish on the way.

The game comes with these great polar bears.

Setup is varied with the modular board and the ice tiles. A bit of randomness with the roll of the dice to get fish, but still some strategic aspects to the game.

We have not played this game before; so we are hoping it’s a hit 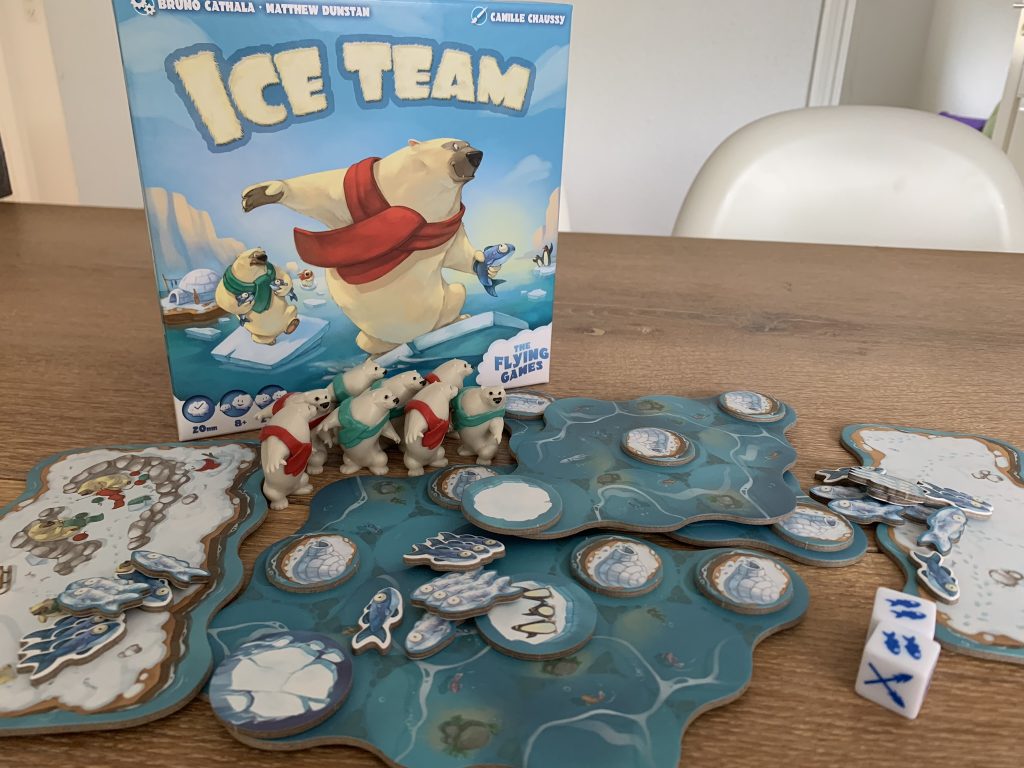 A two-player worker placement and set collection game. A very strategic and very minimal luck based game, where you have to gather resources and points to purchase cards from a grid. These cards will be part of some set collection scoring in the end, but also have some special abilities. The special thing about this game comes in the way you place and access the worker placement spots. There are many ways to try and avoid your opponent from getting the best cards.

What makes this even more strategic is the use of the robber meeple, which blocks a few spots every turn, and it also acts as a round tracker ending the game if someone hasn’t gotten their 12th. card.

The setup is half random, as the board for the grid is the same, but the cards in the middle are random.

I have played this a ton of times online (on BGA – Board Game Arena and Yucata.de – which are fee online sites), and I really hope boyfriend likes it, as it’s one of my favorite two-player games. 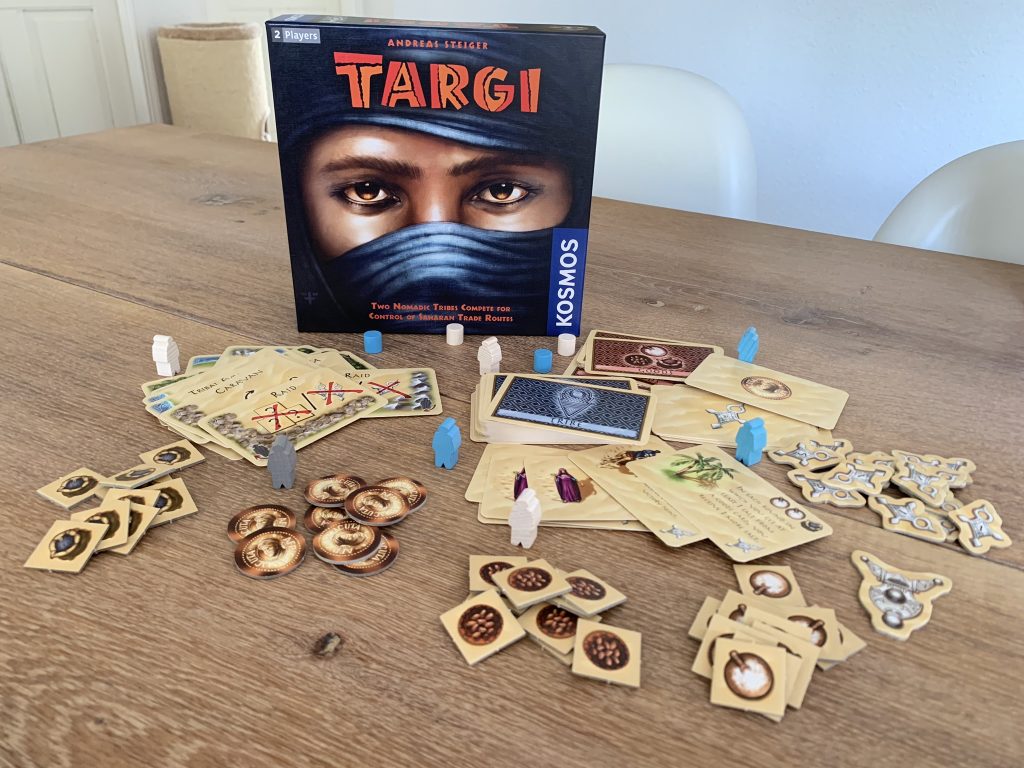 A 1-4 player purely card game, where you have to fill missions with a huge deck of colored cards. You work cooperatively when playing multiplayer. There are differently difficulty levels and a few variants to choose from. The reminds be a bit of the game “The Game” in the sense of not giving all information about your cards and trying to complete the “mission”.

It’s a simple game, yet not easy to beat on the higher levels. You “just” play a card, check if any goals are met, and the draw a card; keeping always 4 cards in your hand. Multiple mission cards can be solved at once. Example of missions are “all purple stacks”, “all values lower than 4”, “the sum of orange is twice the sum of purple” etc.

I have just played is solo, but getting a bit obsessed with it, and I think it will replace “The Game” for me; I have the German version as it was easier to get. I’m interested in trying this multiplayer as well. 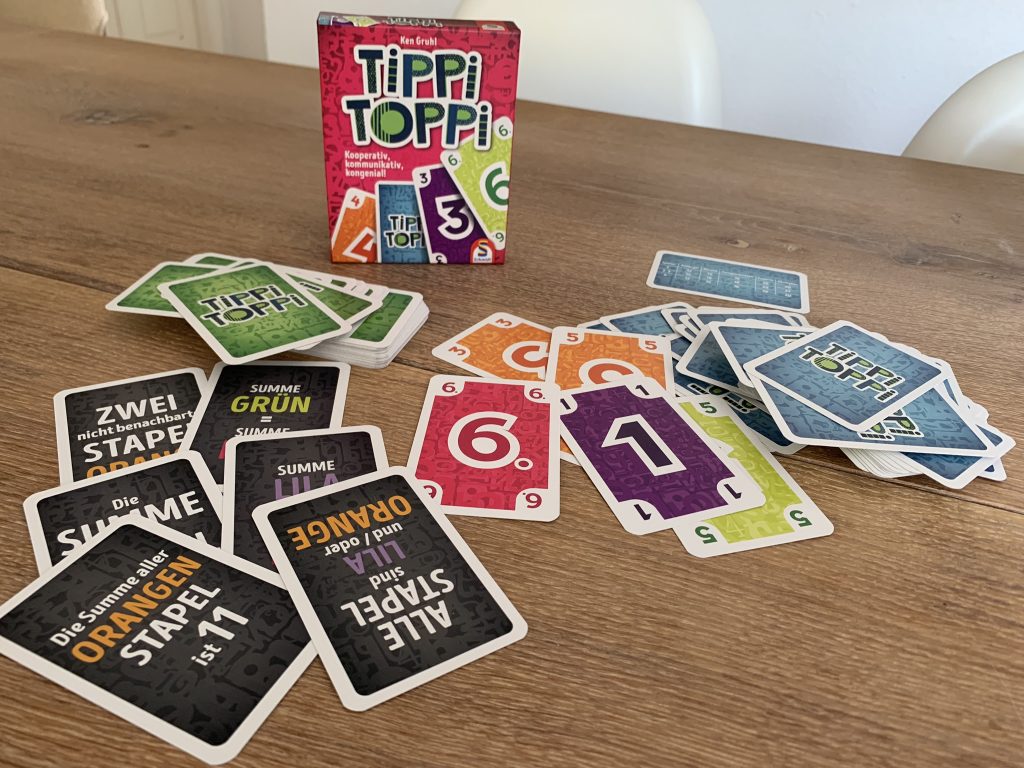 A 2-4 player card collecting and resource management game; where based on the name I don’t understand why it doesn’t come with solo rules, I mean “Cat Lady” is the pure definition of someone alone with a bunch of cats.

A 3 x 3 card grid is setup which contains both cats to feed, food, toy, catnip, costumes and lost cat cards. Cats score you points, but only if they are fed, so you need to balance the amount of food to fit the cats you adopt, but be careful, having too much food might give you a penalty. Toy cards are your classic set collection part of the game, and will score you the most points if you have all 5 different toys. Costumes are like pudding in Sushi Go, if you don’t have any you get negative points, if you have the most, you score the points; in-between it’s worth nothing. Kind of like that catnip is expensive to start on, but getting more pays of rather quickly, but if your opponent just leaves you with the 1 catnip; you lose points.

To avoid giving away all the great cards that were just  put out to fill the row or the column you took, a cat token is placed to block it – your opponents need to take cards from somewhere else UNLESS they have a spray card to spray away the cat.

You can’t have a set collecting game with some extra end of game scoring cards, and this is where the stray cats, you can adopt, by discarding 2 lost cat posters. Some just score extra points on it’s own, but most based on other cats you feed or the amount of costumes you have – again they need to be fed in order to help you.

I have until now only played one 4-player game and one 2-player game in real life, the rest as been on the great app, they have made. Boyfriend accepted the game, so hopefully we can play a bit more. 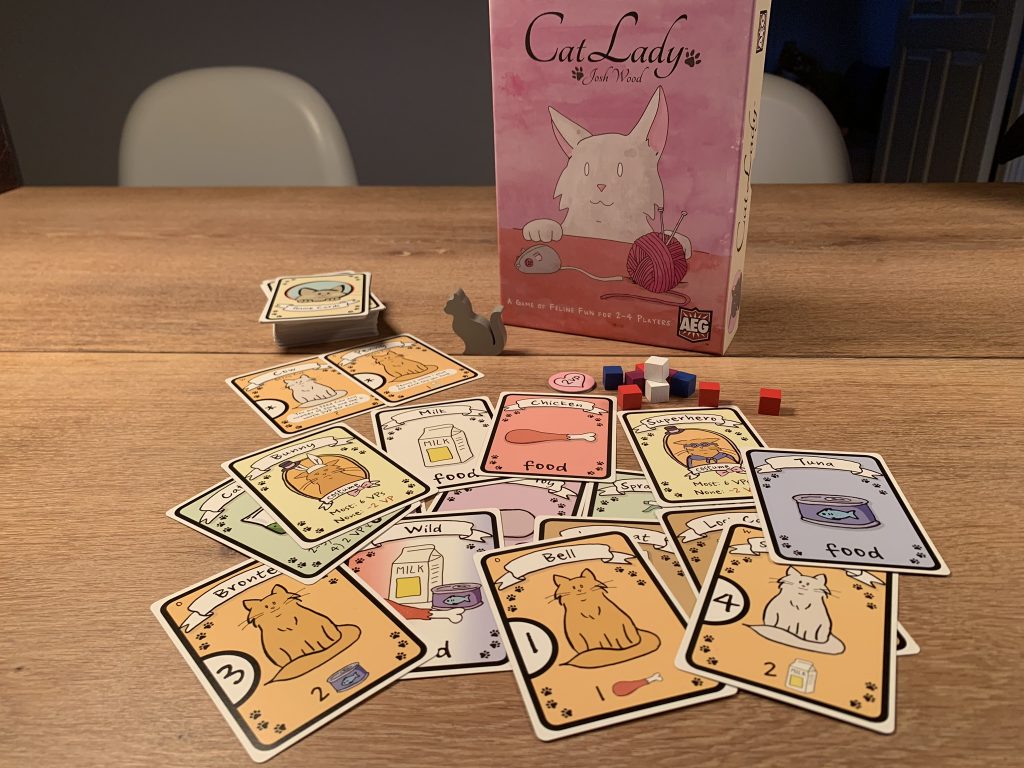 A small dexterity set collecting game from the Pack O games series (pack of gum boxes). Making up a picnic table with the small cards; some have flies on them and some don’t. You will drop a fly catchers from a certain height on to the picnic table in order to catch as many flies as possible as they will give you points in the end of the game.

We have not tried this game yet, but the idea and simplicity feels like a perfect little filler game. 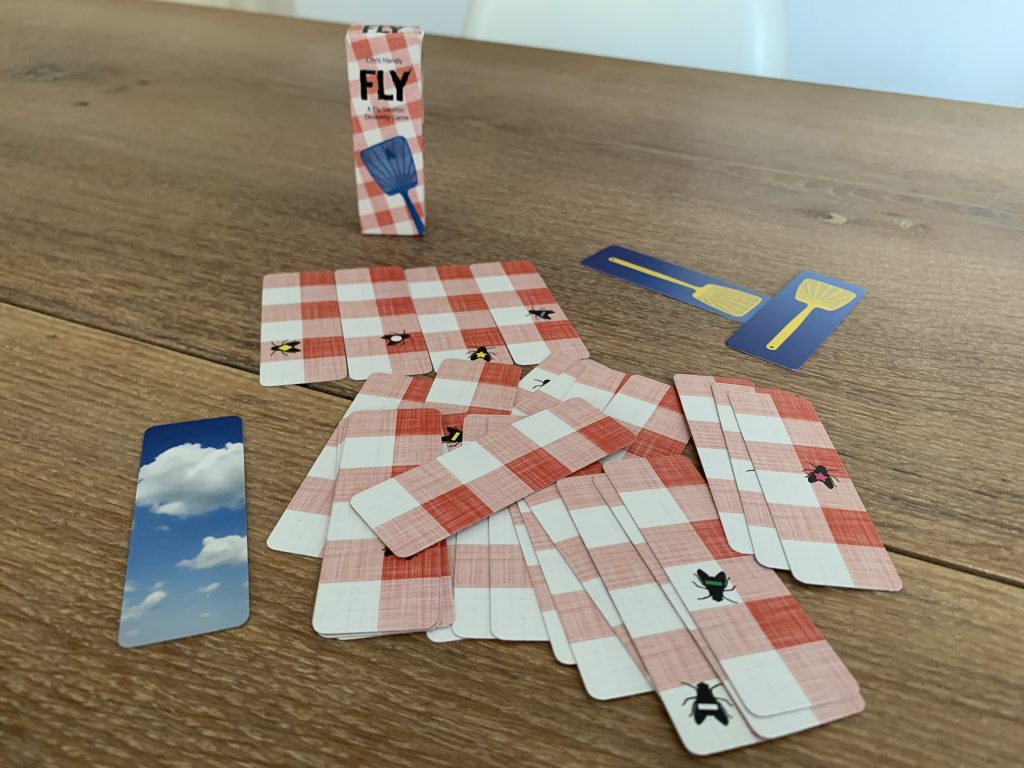 Another small game from the Pack O Games series, but this time with some pattern placing to score points of certain colors; but keeping in mind the last card in your hand will tell you have you score.

We have not played it yet, but given the size we thought we would bring it and see how it goes. 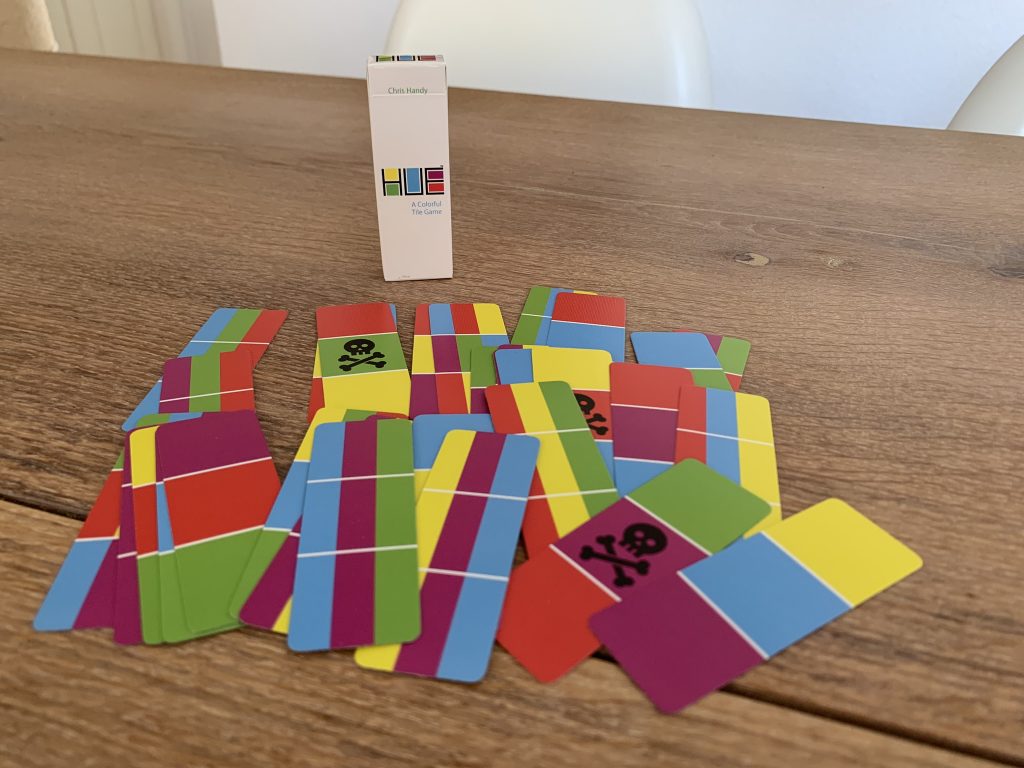 A small and simple little cards game with a small strategic twist of getting rid of your negative points. It was nominated for Spiel Des Jahres, which I don’t really get (all the games in the category where party games, which surprises me).

We have played this a few times, just us two and we can see some of the strategic aspects too it, but sometimes you just get lucky or unlucky depending on the way you see it, and there is not much to do (a quick game). But I imagine it even more fun with more players. 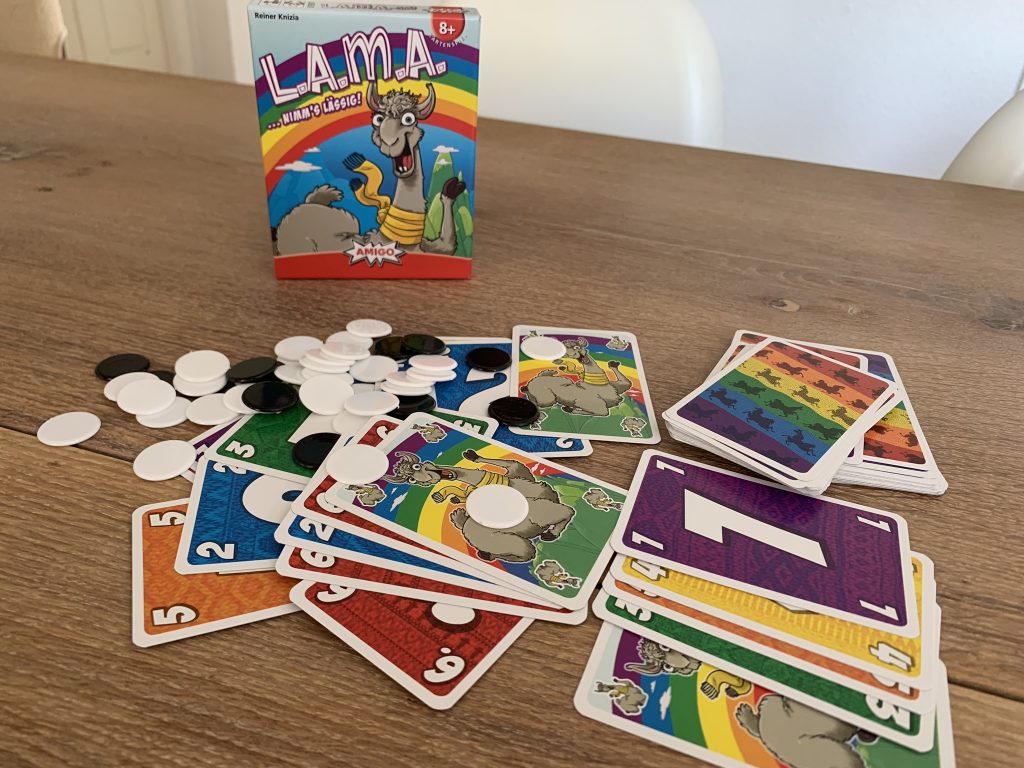 A dice version of the original Sushi Go – hopefully they will also make the Party edition into dice. It seems not much has changed other than replacing the cards with dice and seeing what everyone has in front of them and what will move to you next.

I have always liked Sushi Go and the Sushi Go Party edition, and the simplicity in it, but it doesn’t really work as a two-player game with having to manage a dummy player. We have not tried the unofficial variant of setting up the cards in a grid (much like Cat Lady) and drafting from there. But with this dice version it seems to be possible to have fun with 2 players; so let’s hope. 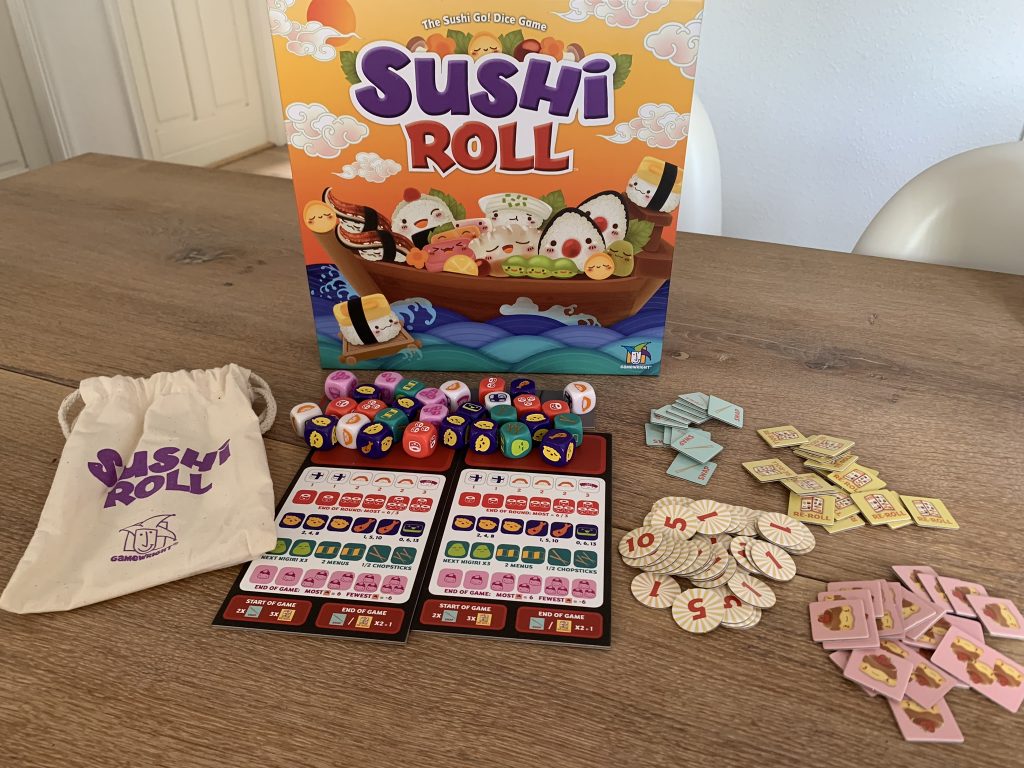 An amazing and very different engine building game with birds and there special ability. You lore birds to certain habitat with feeding them specific food. Some birds just give you points, but most give extra actions or ways of scoring points when activated. You soon find yourself with a great engine, getting food, laying eggs or just drawing cards. And you will need to at least play a few cards in the food and egg engine, has especially food is very hard to come by.

The bird feeder will not come on holiday with us, instead we use a silicone bowl or some other container.

We brought this on our holiday earlier this year and it was a great hit, and since the boyfriend wanted to bring it, I never say no. 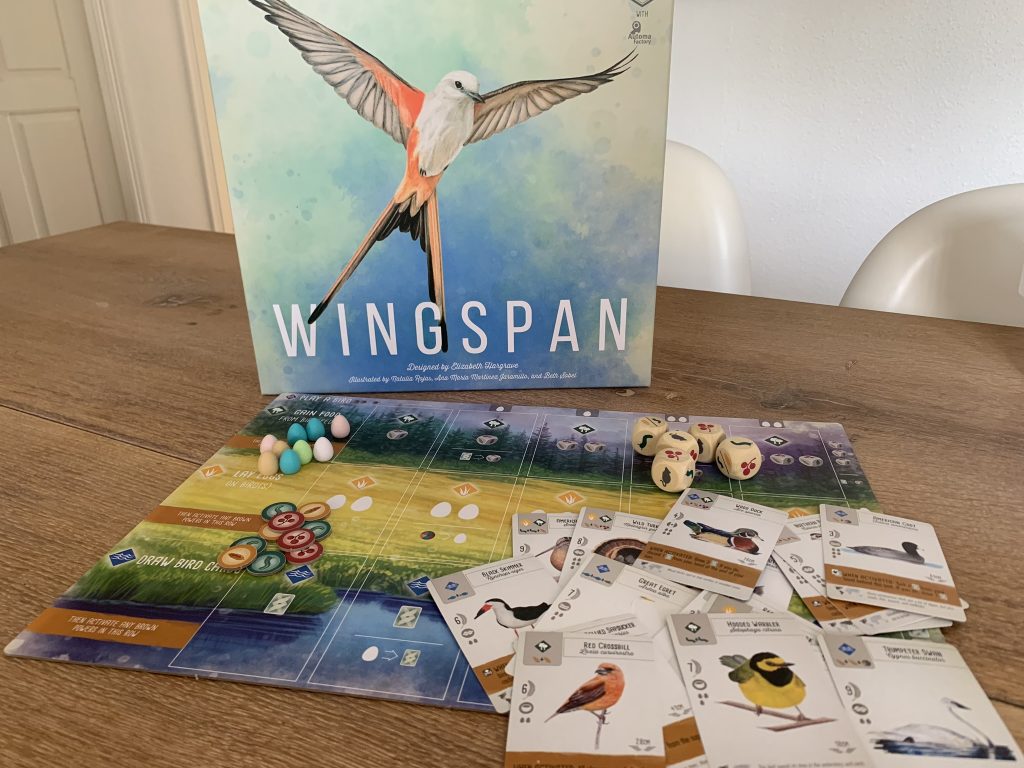 One of our favorite little card game. It’s a very thinking and strategic game, but the luck of getting the right cards can definitely be felt. There is one rule in the middle and as long as you are unbeatable in that rule, you are winning. If not you need to play some cards to either change the rule (maybe from having the highest card to having most cards in a row) or/and play a card to your tableau to win at the current rule. It might seem a bit strange and hard to grasp at first, but when you just get a hang of it, it’s quite a little gem.

Boyfriend loves to play this game, and it might be because he usually wins, no beats me completely, but it’s also a unique game as of now. We usually bring this on holiday so this time is no exception. 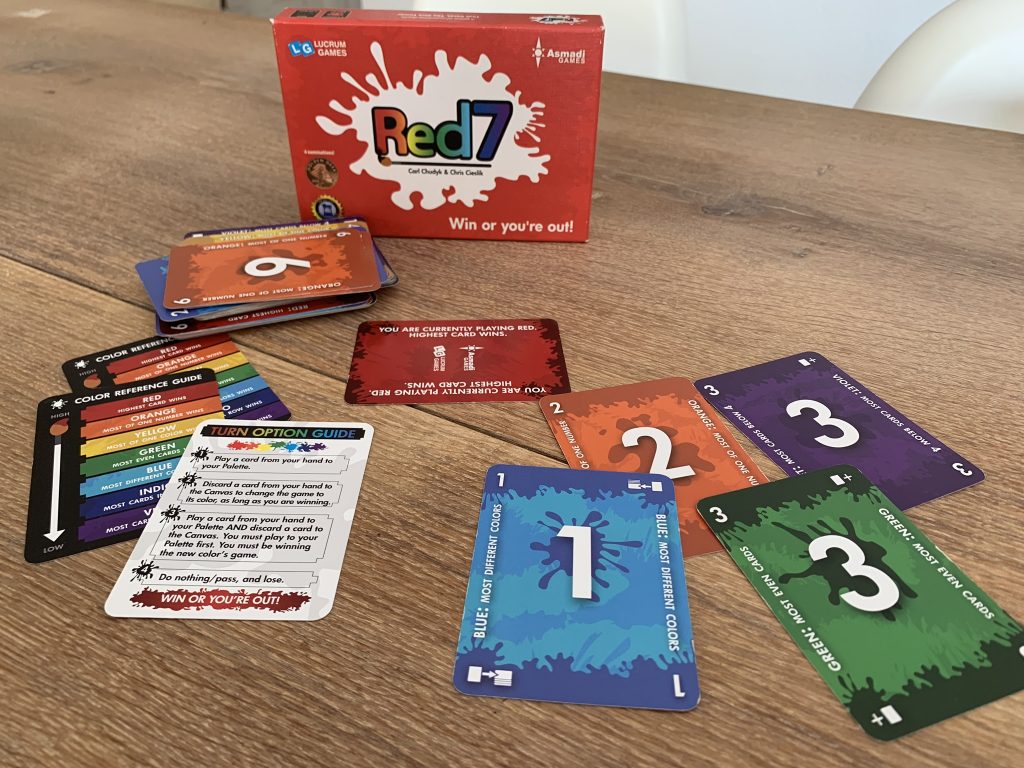 A tiny and quick dexterity game about stacking animals; which is aimed at kids, but we love it. It can be quite a challenge to stack these small animals.

This little game usually is with us on holiday. 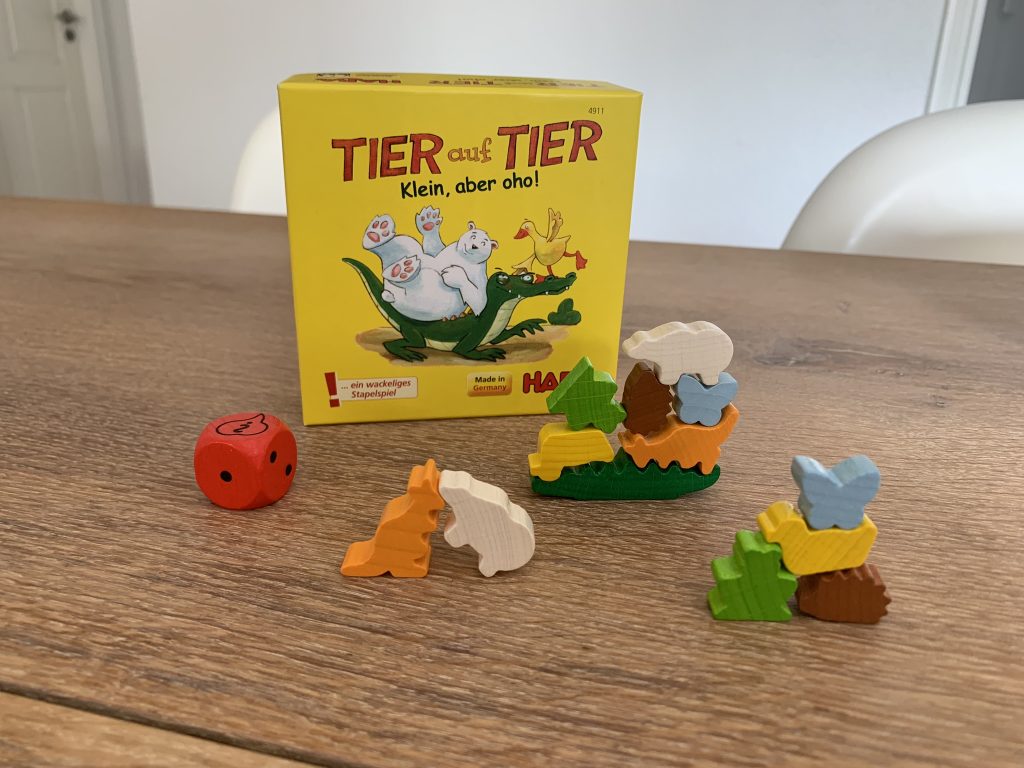 An elegant and relaxing tile laying game. You need to generate enough lantern cards to turn them into victory point, but you also have to watch what your opponents are collecting, as it’s a race to turn in first as the gifts gets less valuable. Every time you place a tile, you get some cards yourself (extra if you can match the pattern) but you are also giving all your opponents some cards; if you want to be really smart, you will give them cards that are “out of stock” and thereby NOT giving them any cards, but it’s not always easy to do. There are some extra matching to look for as they provide you with some tokens, so you are exchange some cards to the colors you need.

It’s a quick little game, as there are not that many tiles, and it’s great at two-player and we have had it on holiday with us before, so it’s boyfriend approved, which is always a plus. 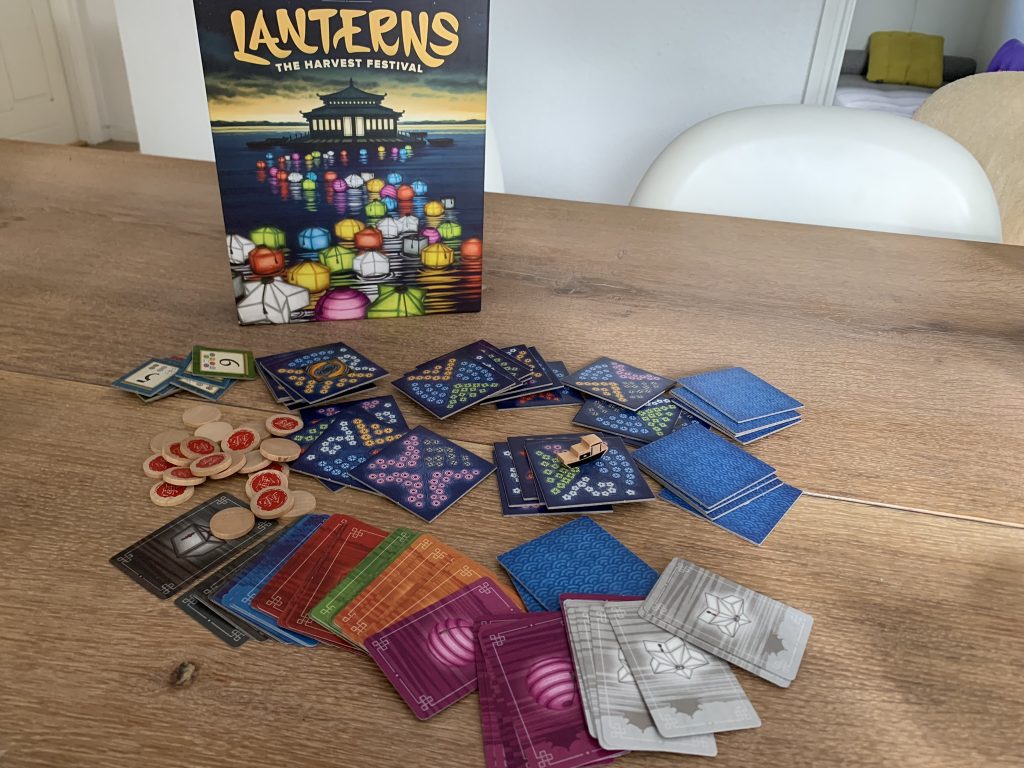 A small trick taking or hand management card game by Reiner Knizia. It seems quite simple but a new way to collect cards according to the card in front or behind it. When you have played at least 3 cards of the same number you are allowed to collect the cards in front of it.

We have not played yet, and I can see it go both ways with the boyfriend, so here’s hoping it goes for the best. 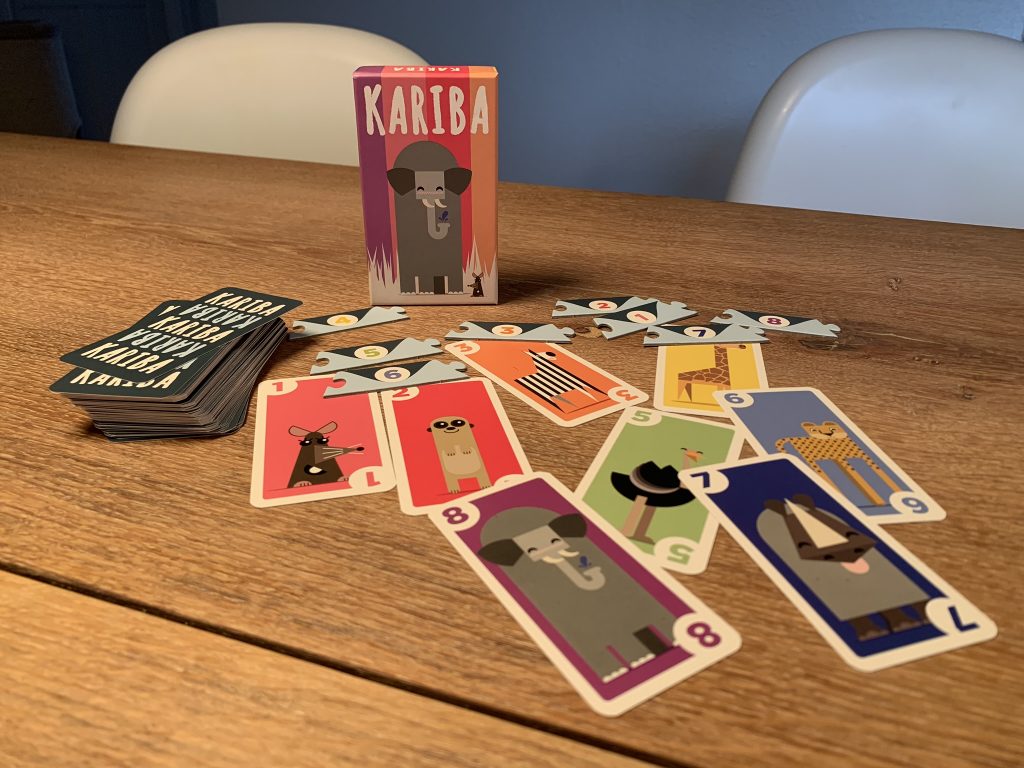 A strategic and simple area control game combined with bag drawing, where you conquer areas according to the token you drew from the bag and the value it has. You each start in your corner and from the token the next token can be placed the amount of spaces according to the value of the token. You can overtake your own or an opponents token 1 time. The reason for overtaking your own is to block your opponent from taking the spot.

We have had this game on holiday before, and we liked the simplicity with the strategic thinking. 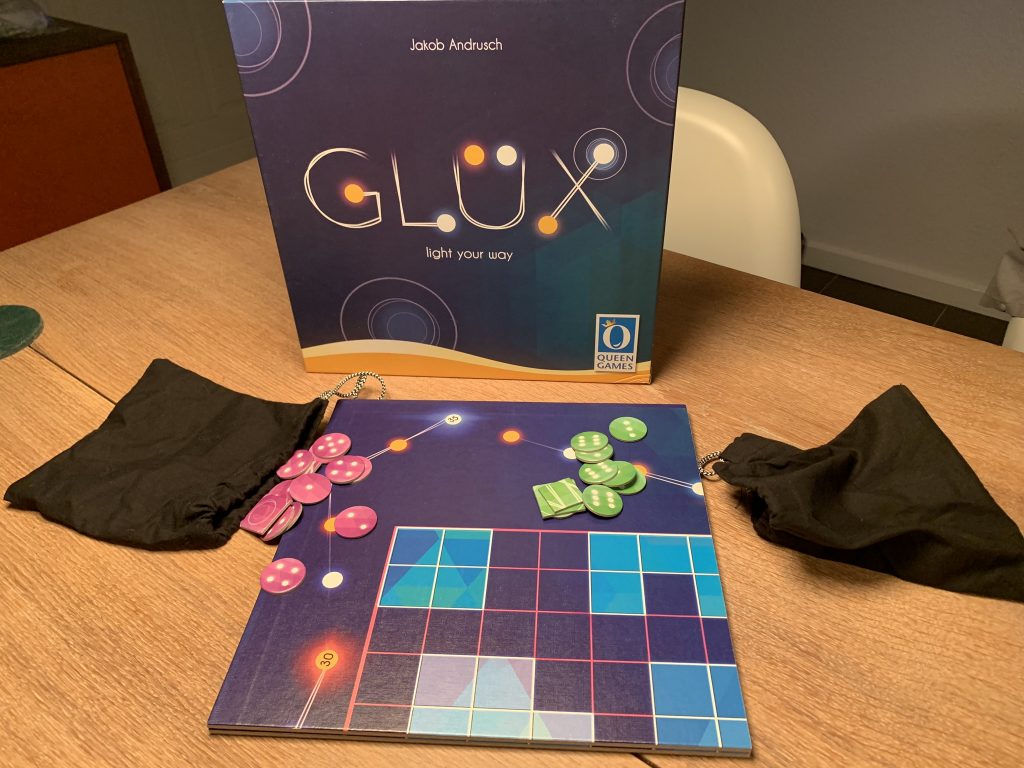 I know I might be overdoing it a bit 😀 – but I like to have options and as long as we have room I feel it’s OK. I’m not sure we will play everything, and that is OK.

All these games fit in these boxes, the boards for wingspan and Glüx are separate, otherwise everything fit inside the boxes. 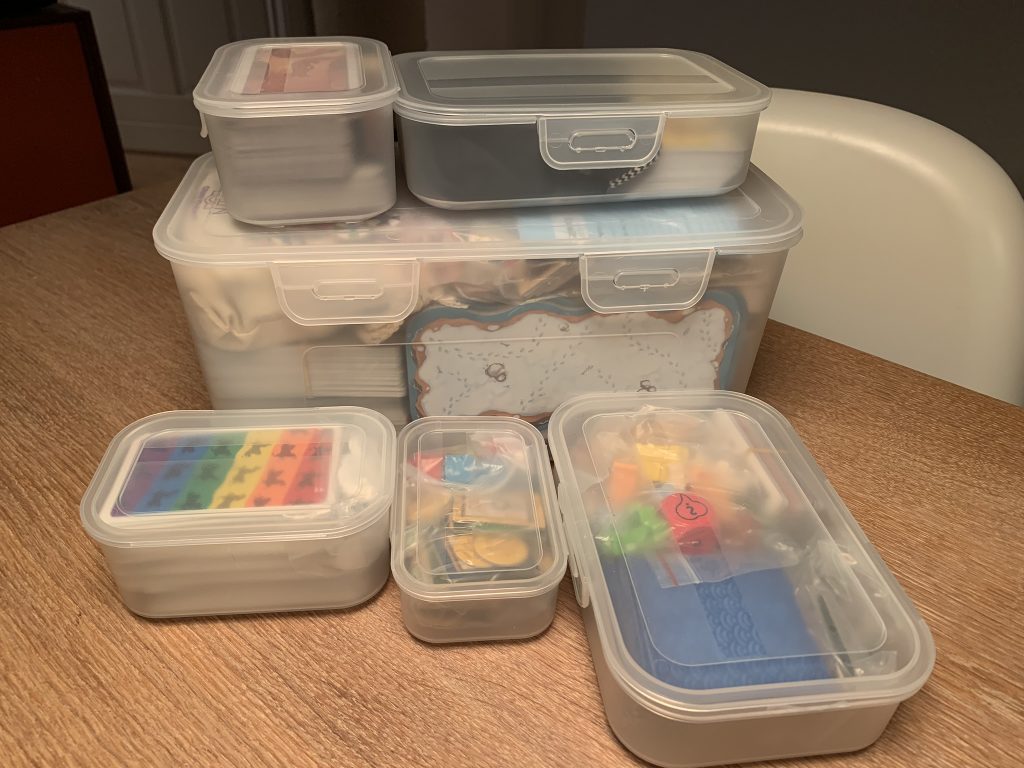